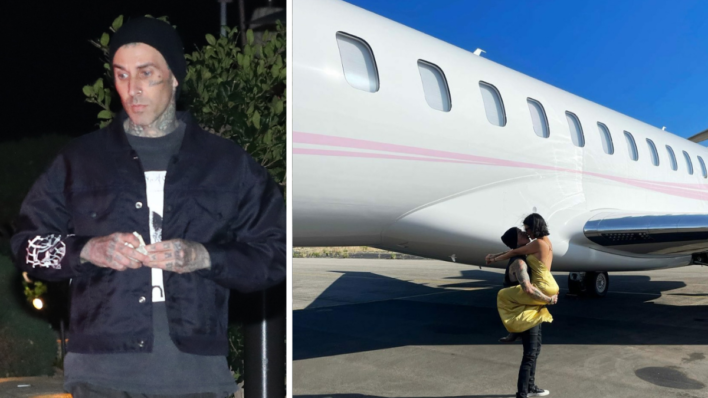 13 years after a horrific incident almost took Travis Barker’s life, he is ready to overcome his fear; all thanks to Kourtney Kardashian.
By Shaoni Das    August 18, 2021

13 years after a horrific incident almost took Travis Barker’s life, he is ready to overcome his fear; all thanks to Kourtney Kardashian.

For the majority of his career, Travis Barker has been known as the red-hot, tattooed bad-boy drummer of Blink-182. He’d enjoyed what many would describe as a “middling” level of fame: famous but overshadowed, beloved but undistinguished. He’s a rockstar through and through, yet he’d only been a well-known figure in his own circle and flying under the radar everywhere else.

Cut to 2021, and he’s become one of the most high-profile men on the planet. That’s what happens when you become romantically associated with one of the most powerful families in the zeitgeist: The Kardashians. He and Kourtney are breaking barriers in a few unique ways, and their dynamic is frankly a refreshing change of pace for Kourtney, who’s been mired in domestic drama for as long as we can remember.

While Kourtney’s emotional development consumes the lion’s share of the coverage, we should also examine Travis’ progress and how Kourtney is helping him heal and overcome obstacles. A fairly ordinary travel milestone recorded over the last few days shouldn’t have been the sensationalized headline it was, but given Travis’ background, it makes sense why it’s being celebrated across the board. It’s also leading a number of people to look closely into Travis, his journey, and how it intersects with that of Kourtney. As it turns out, their timing couldn’t have been more remarkable.

Travis is the last remaining survivor of a deadly plane crash

Audiences are only now beginning to learn about the 2008 South Carolina Learjet 60 crash and its long-lasting consequences.

Travis, his security guard Che Still, personal assistant Chris Baker, and disc jockey Adam ‘DJ AM’ Goldstein were scheduled to fly out to California from Columbia, South Carolina, on September 19, 2008. DJ and Travis had performed in Columbia earlier that night and were looking forward to returning to California in a private plane; they approached the luxurious experience as a “treat” to mark the special occasion of their concert.

And then I was on fire, running like hell. I was running for my family: I didn’t care about anything except being with my dad, my sister, Shanna, my three kids […] I faced my absolute biggest fear, looked it right in the eye – but I don’t know if I’ll ever fly again.

Unfortunately, while gliding through the runway itself, the plane caught on fire and skidded off its course into the highway, after which it collided with an embankment and came to a perilous halt. Travis and DJ were able to evacuate by sliding down the plane’s wing. Barker said he was “soaked up with jet fuel” and was in flames himself.

Travis and DJ were the only two survivors; the remaining four passengers, including the two pilots, perished. Travis spent the next eleven weeks in critical care and burn centers. The explosion had burned over 65% of his body, and he required 16 surgeries, including a series of blood transfusions and skin grafts one after the other. He was overcome with shame and self-disgust, especially since it was his request that his security guard accompanied him on the flight. He didn’t feel worthy of being alive and was in so much pain through recovery that he faced suicidal impulses nearly every day. He went so far as to call up his friends and offer them $1 million to end his life. “I mean, [medical officials] had to take my phone out of my room because I was making these phone calls,” he told Good Morning America.

He didn’t fly for 13 years before meeting Kourtney

The drummer started attending counseling for his post-traumatic stress disorder but felt “intense guilty” nearly every day. Over time, with the support of his ex-wife Shanna and three children, he was able to heal and find his footing in life. However, the distress associated with surviving such a horrific ordeal never fades. “It feels like death’s way over there, and every day I’m running away from it,” he said in 2009. To top it off, his fellow survivor, DJ AM, died within a year of the crash due to a drug overdose.

Travis’ accident debilitated him inside out, and he avoided flying for the next thirteen years. Oddly enough, he’d always had a deep-rooted fear of flying and had only been able to subdue it in his adulthood. In the Rolling Stone interview, Travis shared how, as a teenager, he was “sure” he would die in a plane crash. When Blink-182 were designing their album cover for Take Off Your Pants and Jacket, Travis begged not to be assigned with the plane icon, saying, “I have a really f***ed-up fear of flying.”

The fact that he came so close to his eerie prophecy is either an extraordinary coincidence or just a twisted endeavor of fate. Either way, the plane crash, unsurprisingly, exacerbated his terror a hundredfold. In 2019, he said, “I don’t know if I’ll ever fly again.” He maneuvered through his dilemma by traveling by ship or car instead. Sometimes he would avoid tours altogether if flying was the most feasible option.

I couldn’t walk down the street. If I saw a plane [in the sky], I was determined it was going to crash, and I just didn’t want to see it

Thankfully, upon meeting Kourtney, the 45-year-old finally began exploring the idea of stepping into an aircraft again. On June 25, he tweeted, “I might fly again,” without providing any context. Of course, fans couldn’t help but jump to conclusions; they speculated Travis was planning to overcome his fears for Kourtney’s sake as she is a globetrotting socialite always on the go.

On August 17, Travis posted a photo on Instagram hoisting up his girlfriend with a private jet in the background. “With you anything is possible,” he captioned the photo. A source told PEOPLE Kourtney has been “very supportive” and that she never pushed him toward air travel. In another report, it’s mentioned Kourtney allegedly held her boyfriend’s hand as the plane took off.

If this isn’t the sign of a sweet, passionate bond, we don’t know what is. Yes, it’s impossible to say whether the romance has legs and if it can withstand the strenuous complexities on the horizon, but Kourtney and Travis are moving in the right direction with immense empathy, care, and understanding. It’s an exemplary show of life that’s bound to inspire countless others.

Take your time with your fears

There’s external pressure to conquer your fears as quickly as humanly possible and leave them in the rearview mirror — out of sight, out of mind. However, there’s a mental and emotional cost to pushing yourself before you’re ready. If you act without preparation or a solid understanding of what’s at stake, you might come out in worse shape than you went in, with your fright exploding in all directions and your trauma becoming worse.

Just as Travis waited for the right moment to take the plunge, we can also take our time with our fear. Whether it’s five, ten, or fifty years, it will happen, and if it doesn’t and you’re still able to live life to the fullest, so be it. The best we can do leading up to the moment is to go with a plan, find people you trust and respect, and not be afraid of failure.