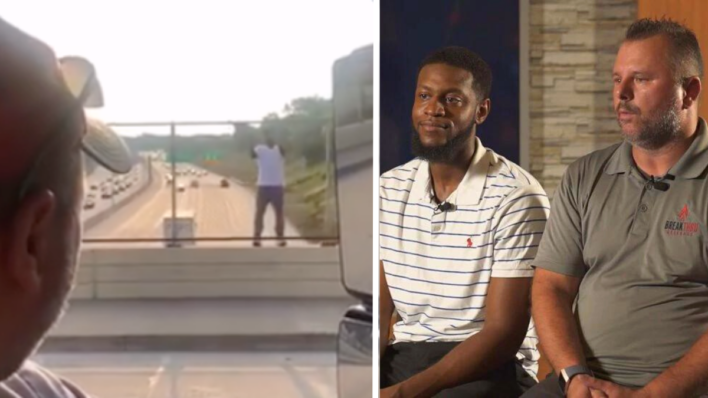 Two delivery drivers used an unexpected method to save a suicidal man from jumping off an overpass.
By Lindsey Staub    December 9, 2021

Two delivery drivers used an unexpected method to save a suicidal man from jumping off an overpass.

Saving lives was not in the job description, but two beer delivery drivers did just that.

Not a normal drive

When Kwame Anderson and Jason Gabel embarked on their delivery route in early August 2018, the pair did not expect anything out of the ordinary. However, while on their usual route in St. Paul, Minnesota, the two caught sight of a man hanging onto a fence on a highway overpass. Believing the man was going to jump, Anderson and Gabel sprung into action.

While Anderson called the St. Paul police, Gabel pulled over. Gabel asked the man if he was alright and if he could come back to the safe side of the fence. Anderson told the man, “If you’re thinking of jumping, you don’t have to.”

Anderson told Twin Cities Pioneer Press that the man said, “You don’t know me. You don’t care. Why are you trying to save me?” To which Anderson replied, “If I didn’t care, I wouldn’t be here right now.”

Anderson knew he needed to keep the man in conversation while the police were on their way, a lesson he learned from Denzel Washington’s role in Inside Man, the 2006 film about a hostage crisis.

“I thought about Denzel Washington when he’s acting as a cop in movies,” Anderson told KMSP-TV.

I said, ‘Well, I gotta keep this guy entertained somehow because if I wait for police, this thing may be over.’

A life changing act of kindness

Eventually, the police officers arrived at the scene and the state patrol and fire department closed the interstate beneath the overpass. Gabel thought the officers were making the man nervous, so he and Anderson devised a plan, which consisted of a 12-pack of beer and a sense of camaraderie.

“I have a pack of Coors Light for you. Follow me,” Anderson told the man.

With the promise of beer on the other side, the man began to inch his way back to safety. He then was taken by the paramedics to Regions Hospital for an evaluation.

Today, it brought people together in a life-saving way.

Though Anderson and Gabel didn’t expect to save a life that morning, their compassion helped talk a man back to safety. If the delivery drivers continued driving that day, who knows what might have happened. Instead of turning a blind eye to the situation, they decided to care about someone else, and the men pulled over. It is important whenever you see someone in need, whether they are a stranger or a loved one, you try to help them. You just might save a life.