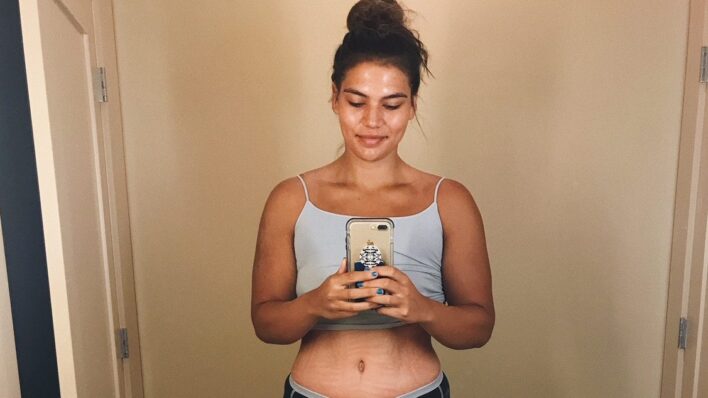 When Laura Micetich returned home from college for the holidays in 2013, she weighed over 300 pounds.

At her heaviest, she and her parents had a serious discussion about her health.

“I’d developed hypothyroidism and had blood pressure issues,” she said. “I was also teetering precariously close to the edge of pre-diabetes.”

Micetich wasn’t overweight as a child, but she’d always been bigger than most children her age. “I was a large framed tall child with chubby cheeks.

Growing up, she played sports and ate all her vegetables but admits she was a “secret snacker with a strong distaste for cardio.”

It was during, middle school and high school that her problems started getting worse.

Fast forward to college and her weight had become a serious problem.

She had already tried all the tricks in the book: weight loss programs and personal trainers — but nothing stuck. So, she began looking into weight loss surgeries.

Taking charge of her health and pursuing her goals

As a young adult, she wasn’t left with many choices, and the idea of surgery left a bad taste in her mouth. Before consulting with a doctor, the now 27-year-old took a step back to assess whether or not she could achieve her fitness and health goals on her own.

Soon enough, she joined her university gym, overhauled her diet, and discovered her passion for weight lifting.

“After dumping out everything in my fridge that served as an unhealthy temptation, I loaded a 10 minute Jillian Michaels workout video on my computer (something I’d also done many times in the past),” she recalled.

She’d been there before, but this time was different.

“At over 300 pounds, it was insanely difficult. I quit after two minutes. Stopped the video. Sat on the floor in a pool of sweat. This time, I didn’t close the video. I told myself to catch my breath, regain my composure, and then — only when I was ready — press play again,” she said, “I got another two minutes in.”

Eventually, she finished the video. She did the workout every day for the rest of the week until she was able to make it through the entire 10-minute video in one go.

Then, she signed up for a gym membership across campus. “The rest is history. Since then, my mentality has been “Don’t quit. Just rest.”

Learning to start over and be kinder to herself

Through her journey, Micetich learned the importance of self-love. “We’re way too hard on ourselves. How we speak to ourselves, the labels we give to ourselves in the mirror… we carry those things with us every day,” she said.

Today, she’s grateful of the experience, as challenging as it was at times, because it’s allowed her to recognize that with every new day comes a new opportunity to start over again.

“No matter how good or bad the day before was, I always start over.” she said.

“I’ve stopped looking at so many things in my life as definitive failure and started simply seeing them as growing opportunities. I learned to start over every single morning. New focus. New kindness to self. It’s changed the game.”