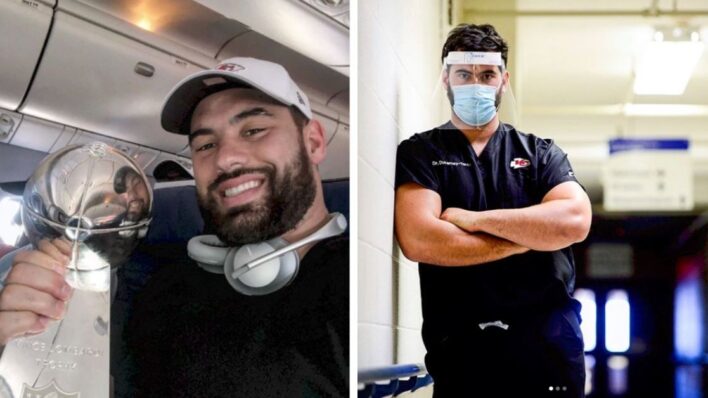 Laurent Duvernay-Tardif won the Super Bowl back in February 2020. Now, he is fighting the coronavirus on the front lines.
By Aly Walansky    April 29, 2020

Laurent Duvernay-Tardif won the Super Bowl back in February 2020. Now, he is fighting the coronavirus on the front lines.

Heroes and champions can come in all shapes and forms, and sometimes, they may even switched their uniforms when they are needed. This is the case of Kansas City Chiefs offensive lineman Laurent Duvernay-Tardif, who won the Super Bowl only a few months ago.

A football player during the season, he also holds a doctorate in medicine. Now, he has returned to where he is needed the most, right now. Crazy right?

Being in the NFL and finishing Med School

Originally from Quebec, Canada, Laurent graduated from McGill’s medical school back in July 2018. Less than a week later, he was back in Kansas City to resume his training for the Chiefs.

Laurent was drafted back in 2014 and his life had taken one heck of a turn. How does one manage two incredibly demanding careers such as football and medicine?

It was no easy feat. During his last two years in the program, he was powering through 70 hours of work per week at the hospital, in constant rotation. He would sleep in the locker room and be awake at 6 AM for his football practice the next day. At times, he couldn’t even find a moment to eat, so he walked around with hard-boiled eggs in his pockets, eating them between seeing patients.

After he got drafted with the Chiefs in 2014, Laurent was able to reach an agreement with his school and spread out the rest of his studies over four years, ensuring that he won’t miss exams or football games.

Now, he is the first NFL player to have also graduated medical school. He had been following the coronavirus pandemic in its early stages, and wanted to help.

His next adversary, the coronavirus

After winning the Super Bowl in February 2020, the prodigy went on a much-deserved trip to the Carribbean with his girlfriend. But when he came back, the whole world had changed.

I had only wanted to get away, and then I wished I had never left. Everything had stopped.

He did not sleep on his laurels. Instead, he donned his medical gear and dove back into his second passion.

Laurent recently shared in a Sports Illustrated that he had his “first day back” at a hospital and it was just as nerve-wracking as a football game.

I felt nervous the night before, but a good nervous, like before a game, and I packed everything neatly: scrubs, white coat, extra pens, even a second pair of shoes that I could leave in my locker, knowing they were clean.

Yet, going back to medicine was even more complicated. While he did hold his doctorate, Laurent has yet to complete the rest of his requirements to be considered a doctor.

“I don’t have a specialty yet, and I haven’t done the residency portion of the program … I reached out to the health ministry and public health authorities, but found out that I fell into a gray area where they didn’t know what to do with me,” Laurent said.

He answered the call regardless

Despite these limitations, the coronavirus pandemic plunged the whole healthcare system in a state of panic. Now, more than ever, they needed all the help they could get and resident doctors were authorized to practice, so they could lend a helping hand.

A few days ago, health ministry officials started a campaign to recruit health care professionals, especially students in medicine and nursing. It’s now possible for me to go back and help. I had already wanted to, but when it’s real, it hits you, the gravity involved.

Laurent answered the call. To him, nothing was more important than to put his knowledge to use and help where he can, even if it wasn’t exactly as a full-on doctor.

His exchanges with the health ministry, as he was trying to figure out how to help out, convinced him that he had to be back.

These conversations made me realize even more the sacrifices that people in health care, on the front line, are making.

To make sure he was on top of his game, he registered for a crash course to review all the basics of sanitization and hospital practice.

It all started with social distancing

He wanted to help spread the message of social distancing too. He realized it one day, after looking out the window.

“One day, while doing them from my apartment, I looked out and saw people gathering at a picnic table in plain sight,” Laurent said. “It was so frustrating. You know, this is not like a disease where there’s a simple, magical pill, to make it go away. It’s a virus.”

Now, he wants to spread awareness while doing his part on the front lines. As for his football team? They’re incredibly proud.

I had to check in with the Chiefs from a contract standpoint. They’ve been amazing. They were proud of the fact that I wanted to go help. They said they would support me.

Laurent says the pressure he felt at the Super Bowl couldn’t be more different than the sentiments he is experiencing upon his return to the medical field, in the midst of a pandemic.

When you’re going in to help it’s more about your duty as a doctor and a citizen. It’s not the time to be the hero and be impulsive. You’ve gotta do it the right way. You’ve gotta really take this seriously…

He could have stayed home…but he didn’t

Described as a “Renaissance man,” Laurent could have easily folded his arms and remained home, waiting for the outbreak to pass. After all, he does not yet hold his medical license and has another prolific career in the NFL.

Instead, like the many other heroes of this pandemic, he found out where he was most needed and got to work, no questions asked. His drive, in everything that he does, be it football or medicine, is nothing short of inspirational. It’s a reminder that we too are capable to help others and achieve our goals, if we put our mind to it.