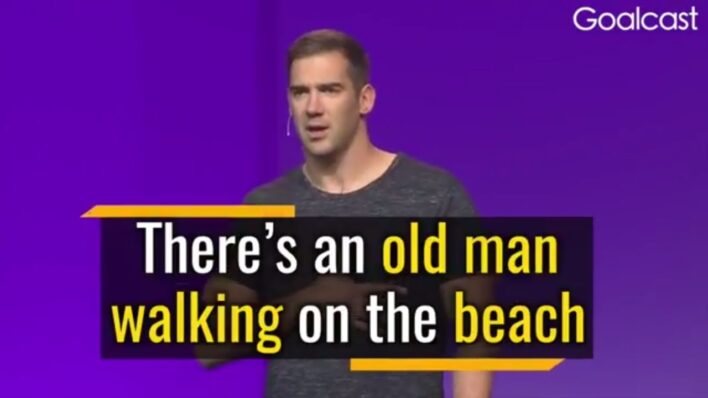 Lewis Howes | This is How One Starfish Made a Difference

Lewis Howes – Make A Difference Lewis Howes shares an inspirational parable about a little boy who chose to make
By Goalcast    April 6, 2018

Lewis Howes shares an inspirational parable about a little boy who chose to make a difference even when the odds were stacked against him.

There’s an old man walking on the beach. And in the distance, he sees a boy throwing something into the water, and as he gets closer, he walks up on the shore, and he sees that there’s millions of starfish on the beach that have been washed up from a storm the night before. And as he gets closer to the boy, he goes up to the boy and says, “Boy, what are you doing? “Why are you throwing starfish back in the ocean?”

And the boy looks to the old man and says, “They got washed up, and if I don’t pick them up, “and throw them back in, they’re all gonna die.” And the old man looks to the boy and says, “You’re crazy, there’s no way you’re gonna “be able to do this before “the tide goes back, and there’s no way. “They’re all gonna die.” And the boy picked up one more starfish. He throws it back into the ocean, and he says, “Well, at least I made a difference to that one.” And we all have an opportunity to make a difference. It doesn’t have to be the world, right now, but we can go out and make a difference to one person today. And for me, that’s a great life.