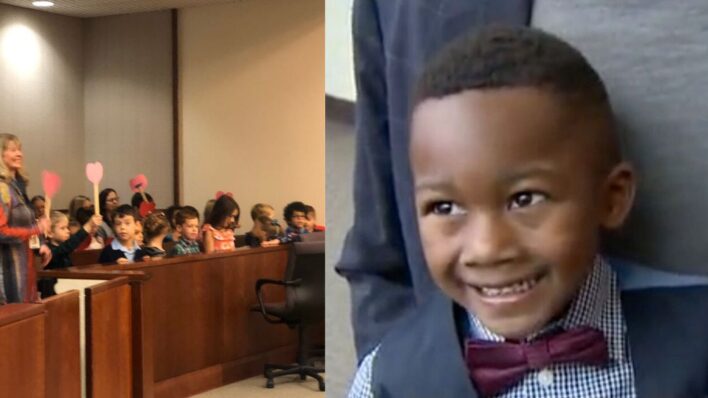 A 5-year-old boy’s adoption story takes a heartwarming turn as his classmates and their parents decide to attend his courthouse ceremony.
By Aly Walansky    December 10, 2019

A 5-year-old boy’s adoption story takes a heartwarming turn as his classmates and their parents decide to attend his courthouse ceremony.

Michael Clark Jr. is a 5-year-old boy whose life has just completely changed. After years of loneliness, he now has tons of friends and a new family. To mark that very special event, his new adoptive parents and kindergarten decided to surprise him by having his classmates attend the official ceremony.

“He was really excited they were there,” David Eaton, Michael’s new father, told BuzzFeed News. “He views his classmates as his extended family so it was a highlight for him. He was definitely having fun there.”

From foster care to a new home

Michael is only five years old, but he’s led a rough life so far, having been in and out of the foster care system. It hasn’t stopped him from being friendly, loving sports and having tons of energy. When his new parents enrolled him at Wealthy Elementary School in East Grand Rapids, Eaton said “the school embraced him as one of their own.”

“It was pretty clear right off the bat that he was a really special kid.”

Once the family had decided to formally adopt Michael, his teacher had an idea: what if his whole class could get involved?

“We have a theme at our school, ‘Put a Little Love in Your Heart,’ you know that song by Annie Lennox?” said Michael’s teacher, Kerry McKee. “I always tell my students that you rise when you lift others, and that’s what we did with Michael.”

The courthouse was filled

“That’s when I came up with the idea that what if we, the whole class, went to the court with them,” the teacher said. “So I asked the principal and she said, ‘I can’t think of a reason why not.'”

And then the kids’ parents got involved too! “We couldn’t afford a bus so I emailed the parents asking if six or seven could take off work to drive the kids to the court house,” she said. “The next morning 14 out of 23 offered to skip work and come.”

The parents ended up chipping in to rent a bus, and along with the classmates, 14 adults, including teachers, secretaries, administrators, and parents, were dropped off right in front of the court house.

“We had them pick what color heart they wanted to bring and put them on rulers because, ‘love rules,'” she laughed. “I’m corny like that. But I am riding this love wave with such passion…”

They made history together

“It’s the first time in county history that a whole squad of kindergartners showed up to an adoption hearing”, Holly Hernandez, an adoption caseworker with the 17th circuit court, told BuzzFeed News.

It’s amazing how beautiful and supportive a community can be when they all join together! By regrouping to celebrate Michael’s special moment, the school and parents made sure that it will remain an unforgettable memory. His story is evidence that taking the time and making a conscious effort to honor the good in our lives, and the lives of others, can generate even more positivity.