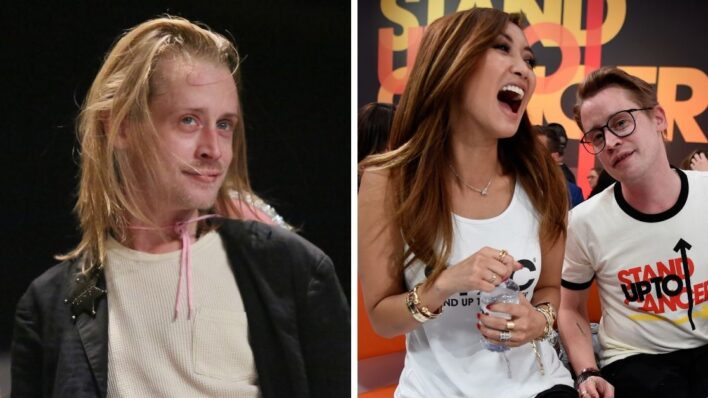 Macaulay Culkin was fighting major trust issues before meeting Brenda Song. The Home Alone star never thought he would find his soulmate in the most unlikely person.

Macaulay Culkin was fighting major trust issues before meeting Brenda Song. The Home Alone star never thought he would find his soulmate in the most unlikely person.

Macaulay Culkin has lived through his share of ups and downs. Since becoming a household name at 10 thanks to his iconic role in Home Alone, the actor has struggled with fame, substance abuse — “I played with some fire, I guess is the best way to put it,” he told Esquire in 2020 — and numerous losses, including the death of his two sisters.

As he told Esquire, however, he’s grown up and become “relatively well-adjusted.” He’s bought a home, become a self-professed “homebody,” and is now looking forward to starting a family — all thanks to his girlfriend, Brenda Song. The pair met on the set of Changeland in 2017 and although they’ve mostly kept quiet about their romance, they have revealed a few tidbits about what makes them tick as a couple.

Here’s what we can learn from Macaulay Culkin and Brenda Song’s homey relationship:

Macaulay Culkin hasn’t always been lucky in love. In 1998, when he was just 17, he married actress Rachel Miner and they split two years later. Two years after that, he started dating Mila Kunis and the pair had a promising long-term relationship, but it ended in a “horrible, horrible breakup” after nine years.

Given that history, it’s no surprise that Culkin put up a barrier and when he first started dating Brenda Song (who was previously engaged to Miley Cyrus’ older brother, Trace), he expected the worst.

Taking a chance on happiness can be scary

The two young actors were both cast by their mutual friend, Seth Green, in his directorial debut, Changeland, and although Green told Esquire he “didn’t see that one coming,” they connected instantly.

As Brenda told ET in 2019, they had plenty in common straight off the bat, seeing as they were both child stars. “It’s almost like child actors, we don’t [have] to talk about it,” the Suite Life of Zack & Cody alum noted. “You just look each other in the eye and you nod and we know.”

But Macaulay was sure their bond would lead to heartbreak, as he simply couldn’t shake the feeling that it was too good to be true. In fact, he was convinced that, sooner or later, the other shoe would drop.

But love always requires a leap of faith (after all, it’s impossible to know what the future holds) and taking a chance on happiness can pay off — or not. In Macaulay’s case, it was definitely worth the risk.

Finding ‘The One’ can change everything

The couple soon began spending more and more time together and were spotted on a double date with Seth Green and his wife, Clare Grant, in September 2017, then they vacationed in Paris with Macaulay’s goddaughter, Paris Jackson, in November.

And while Brenda played coy, telling Us Weekly in September 2018 that she doesn’t “like to talk about my personal life, but everything’s wonderful and I’m happy,” Macaulay chose to be more candid.

Sitting down for an interview with The Joe Rogan Experience podcast in August 2018, he professed his love to the world and revealed he had thrown caution to the wind. So much so that he was ready to buy a house with his girlfriend. “I have a good life out here,” he said. “I have a pretty little family — a pretty girl, a pretty dog, a pretty cat, and all that stuff. We’re gonna move. We’re doing the house thing and all that kind of stuff.”

Macaulay also shared that he and Brenda were committed to starting a family. “I’m gonna make some babies,” he proclaimed. “This one’s a good one, so I’m probably going to put some babies in her in a little bit,” he quipped. “I mean, we’ve definitely been practicing.”

Sitting down for a candid interview with Esquire in 2020, Macaulay Culkin admitted that stepping away from acting while still making the occasional bizarre headline (like the time he reportedly stormed off stage during a concert because someone interrupted his kazoo solo) had an undesired effect.

“People assume that I’m crazy, or a kook, or damaged. Weird. Cracked. And up until the last year or two, I haven’t really put myself out there at all. So I can understand that,” he told the magazine.

And so, when he first met his girlfriend, he was worried she’d harbor the same misconceptions. But he needn’t have worried, as Brenda decided to draw her own conclusions. Looking beyond the headlines, she took time to discover who he really is.

“People don’t realize how incredibly kind and loyal and sweet and smart he is,” Brenda told Esquire. “Truly what makes Mack so special is that he is so unapologetically Mack. He knows who he is, and he’s 100 percent okay with that. And that to me is an incredibly sexy quality. He’s worked really hard to be the person he is.”

And she really does love every part of him. Case in point: she keeps a notebook next to their bed just so she can write down anything her boyfriend might say in the middle of the night that makes her laugh.

True love can change you — for the better

Love can make you do things you never expected and in the case of Macaulay Culkin, it turned him into a happy “homebody.” As the actor told Esquire, home life suits him well. These days, he’s happiest when he’s home alone with his girlfriend — a surprise for the self-professed “tramp” and “vagabond” for whom buying a home was a seriously big deal.

Macaulay and Brenda are also proud parents to two cats — Apples and Dude — a fish named Cinnamon, a Shiba Inu named Panda, and a blue-headed pionus bird named Macho. Plus they hope to add a baby to their brood soon.

But while Macaulay has been happy in his new low-key life, Song hopes he hasn’t given up on acting for good. “I truly believe that he is the actor he is now because of all the things he had to go through,” the Disney star told Esquire. “He has gone through so much tragedy; he’s had so many ups, so many downs; he’s seen the ugly side of this industry; he’s also seen the amazing side of this industry. So he can pinpoint exactly what he doesn’t want and what he doesn’t like about it,” she added, showing just how much love, respect, and devotion she has for her beau. “But yeah, I hope, I hope, I hope.”

In August 2020, the usually private Brenda showed off her love for Macaulay once more by sharing an incredibly sweet Instagram message in celebration of her boyfriend’s 40th birthday.

Calling him a “magical being,” she gushed, “I could sit here and write endlessly about how wonderful, kind, loving, genuine, loyal, honest, brilliant and hilarious you are, and how grateful I am that I get to share and do this life thing with you,” she wrote. “My unicorn that I never thought could exist, I am [the] luckiest person in the world because I am loved by you.”

Go on — take that chance

Nothing is ever certain in life and that’s definitely true when it comes to relationships. Meeting someone you feel an intense connection with can be scary (especially if you’ve experienced intense heartbreak before), but as Macaulay Culkin and Brenda Song show us, taking a leap of faith can be seriously worth it.

Despite his early trepidations, the actor decided to give love a chance and, three years later, he’s in a place he likely couldn’t have imagined: a home owner who’s happiest spending time with his girlfriend and who’s ready to start a family. Because when you take a chance on love, it can change you in ways you never expected and lead to happiness you didn’t dare dream of.