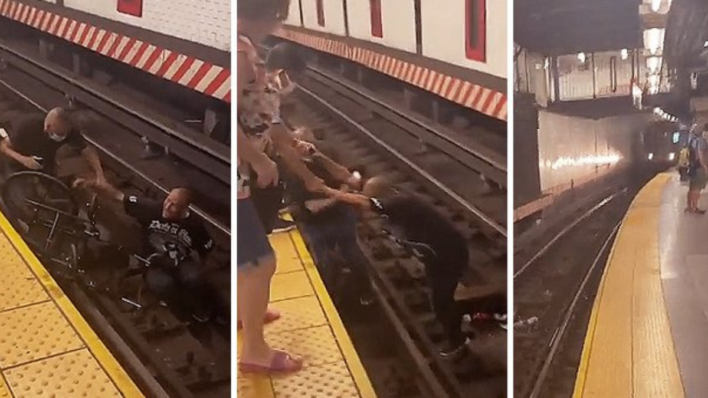 Heroic Man Jumps Onto Subway Tracks To Save Man In Wheelchair

When a man using a wheelchair fell on the subway tracks of Union Square Station in New York City, Good
By Arielle London    August 24, 2021

When a man using a wheelchair fell on the subway tracks of Union Square Station in New York City, Good Samaritans sprung into action.

A bystander-turned-hero immediately launched himself off of the platform and onto the tracks to help the fallen man. He first attempted to pick up the man right away, but then moved the wheelchair back onto the platform. Finally, he reached back for the man and lifted him by the torso as others on the platform pulled the hero to safety. Moments later, the train arrived.

The rescued man was taken to Bellevue Hospital for treatment for his injuries. They are not believed to be life threatening.

The video of the man being pulled to safety was recorded by CBS New York reporter Lauren Mennen. She witnessed the event at around 1:15 pm on August 4.

Mennen says, “One man jumped right into action. He didn’t think twice whether he was going to go on those tracks.”

“I was like, people need this. There’s heroes in action and I was like I’m going to wave my hand at the train and it will all be good. I hope people just take positivity away from all this.”

People acted together to save another human life. The concept of “we are stronger together” is one that the world definitely needs right now. In a time where isolation has become a consistency, we can often feel further and further away from others. This act of heroism reminds us of the humanity that does in fact exist, and that we are in fact not alone.

When you receive a call to action, answer! Spring into action when you are in a position to help someone in need. While crisis situations will often be guided by instinct, sometimes you need a little self-encouragement to get involved in the affairs of others. When someone so clearly is in a position where they need assistance, be that help if you have the capability.

Life will surprise you, often. The nature of reality is such that when society comes together, you can expect the unexpected. There are everyday heroes everywhere. Be the hero where and when you can and answer the call to do the extraordinary.