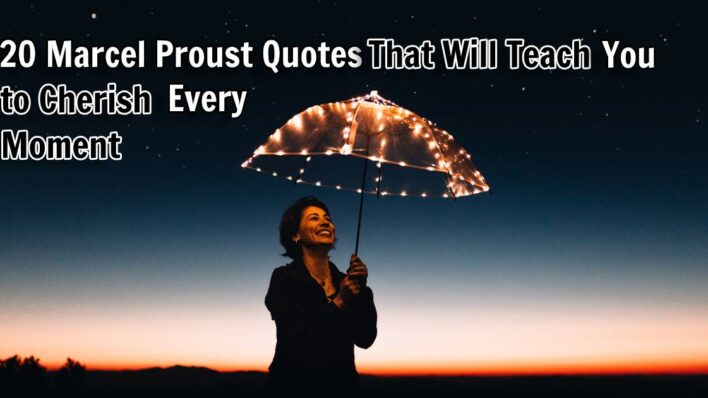 Marcel Proust (July 10, 1871—November 18, 1922) was a French novelist, best known for his seven-volume novel based on his own life, À la Recherche du Temps Perdu (In Search of Lost Time).

Proust discovered his writing talent when he was only a teenager and wrote for class magazines; his later work was influenced by his philosophy master, Alphonse Darlu.

Proust was no stranger to tragedy – he was devastated after his father’s death. His mother also passed away only two years later, forcing Proust to be admitted into a sanatorium. Fortunately, he emerged once again into society after two months and writing helped him overcome his pain.

His masterpiece, À la Recherche du Temps Perdu, consists of raw material from the author’s life and his reflections on the loss of time. However, it also emphasizes the fact that life is precious, full of moments of joy and beauty — and those moments are indestructible.

Here are 20 Marcel Proust quotes that will make you cherish every day:

We don’t receive wisdom; we must discover it for ourselves after a journey that no one can take for us or spare us.

Let us be grateful to people who make us happy, they are the charming gardeners who make our souls blossom.

People wish to learn to swim and at the same time to keep one foot on the ground.

Pleasures are like photographs: in the presence of the person we love, we take only negatives, which we develop later, at home, when we have at our disposal once more our inner dark room, the door of which it is strictly forbidden to open while others are present.

Always try to keep a patch of sky above your life.

The real voyage of discovery consists not in seeking new landscapes, but in having new eyes.

Happiness is beneficial for the body, but it is grief that develops the powers of the mind.

As long as men are free to ask what they must, free to say what they think, free to think what they will, freedom can never be lost and science can never regress.

We are healed of a suffering only by experiencing it to the full.

We are all of us obliged, if we are to make reality endurable, to nurse a few little follies in ourselves.

Our worst fears, like our greatest hopes, are not outside our powers, and we can come in the end to triumph over the former and to achieve the latter.

MY DESTINATION IS NO LONGER A PLACE, RATHER A NEW WAY OF SEEING.

If a little dreaming is dangerous, the cure for it is not to dream less, but to dream more, to dream all the time.

It is in moments of illness that we are compelled to recognize that we live not alone but chained to a creature of a different kingdom, whole worlds apart, who has no knowledge of us and by whom it is impossible to make ourselves understood: our body.

Thanks to art, instead of seeing one world only, our own, we see that world multiply itself and we have at our disposal as many worlds as there are original artists, worlds more different one from the other than those which revolve in infinite space, worlds which, centuries after the extinction of the fire from which their light first emanated, whether it is called Rembrandt or Vermeer, send us still each one its special radiance.

Time, which changes people, does not alter the image we have of them.

If we are to make reality endurable, we must all nourish a fantasy or two.

Everything great in the world is done by neurotics; they alone founded our religions and created our masterpieces.

One cannot change, that is to say become a different person, while continuing to acquiesce to the feelings of the person one has ceased to be.