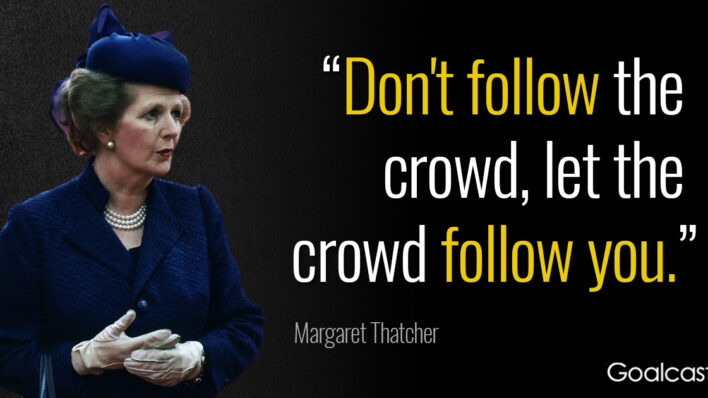 “The Iron Lady” could simply not be moved. With a very strong set of principles, Margaret Thatcher was the first
By Flavia Medrut    April 6, 2018

“The Iron Lady” could simply not be moved. With a very strong set of principles, Margaret Thatcher was the first female prime minister of the United Kingdom.

Thatcher got her nickname after accusing the Soviet Union of being bent on world domination and giving a fearless anti-communism speech back in 1976. Thatcher believed in a free market and free capitalism. During her three terms, she faced a military challenge that became known as the Falklands War, reduced trade union power, cut social welfare programs and privatized some state-owned companies. While trying to implement a fixed-rate local tax, The Iron Lady’s popularity decreased and, in 1990, she announced her resignation.

Due to her leadership style, amazing determination, actions and policies, Thatcher is considered one of the most famous politicians in British history.

Here are 15 Margaret Thatcher quotes to boost your determination to push forward. Being powerful is like being a lady. If you have to tell people you are, you aren’t.

Look at a day when you are supremely satisfied at the end. It’s not a day when you lounge around doing nothing; it’s a day you’ve had everything to do and you’ve done it.

To wear your heart on your sleeve isn’t a very good plan; you should wear it inside, where it functions best.

You may have to fight a battle more than once to win it.

If you just set out to be liked, you will be prepared to compromise on anything at anytime, and would achieve nothing.

I do not know anyone who has gotten to the top without hard work. That is the recipe. It will not always get you to the top, but it will get you pretty near.

Plan your work for today and every day, then work your plan.

Any leader has to have a certain amount of steel in them, so I am not that put out being called the Iron Lady.

It pays to know the enemy — not least because at some time you may have the opportunity to turn him into a friend.

When people are free to choose, they choose freedom.

I love argument, I love debate. I don’t expect anyone just to sit there and agree with me, that’s not their job.

Disciplining yourself to do what you know is right and important, although difficult, is the highroad to pride, self-esteem, and personal satisfaction. It is not the creation of wealth that is wrong, but the love of money for its own sake.