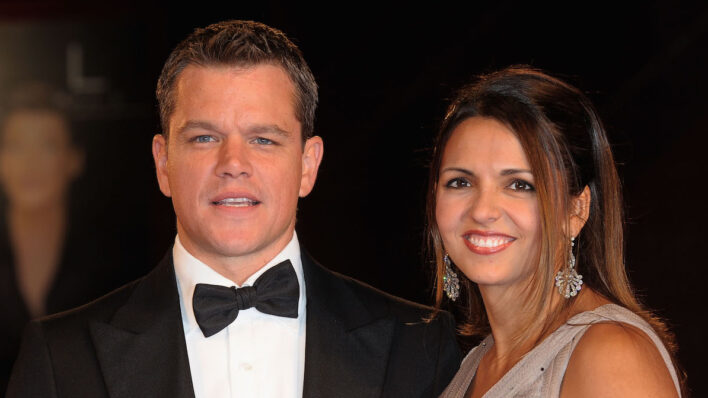 Matt Damon and Luciana Barroso’s romance started when she literally helped him hide from his fans while she was working her shift as a bartender. At the time, Damon had given up on love but fate surprised him.
By Barbara Pavone    April 3, 2020

Matt Damon and Luciana Barroso’s romance started when she literally helped him hide from his fans while she was working her shift as a bartender. At the time, Damon had given up on love but fate surprised him.

Matt Damon and Argentinian-born Luciana Barroso aren’t your typical Hollywood couple. For one, they’ve managed to keep an impressively ‘normal’ life. You’d be hard-pressed to find any interviews with Barroso (she doesn’t even have a public social media account) and the pair have never been the subject of nasty tabloid headlines. Even their wedding, which took place at New York City Hall in December 2005, was a low-key affair.

And yet, as Vogue once proclaimed, they are easily “Hollywood’s best couple”. Not only is the story of how they met like something out of a rom-com, but the love and support they show each other is truly admirable.

Here’s what we can learn from Matt Damon and Luciana Barroso’s relationship:

I remember thinking, in my early 30s, that I wouldn’t [get married], you know? I didn’t think it was going to happen for me.

Matt Damon to The Hollywood Reporter

Explaining his pessimism, he continued, “My brother found his soulmate very young; he’d just turned 26 when they were married. He’d been married for 10 years by the time I even met my wife, and I looked at this really happy, wonderful marriage and kind of went, ‘I guess that’s not going to happen for me.’ And then it did.”

Luck was on their side

Matt Damon will be the first to tell you that luck was on his side the day he met his future wife. That’s because a series of very fortunate events brought them together in 2003 while Damon was in Miami shooting Stuck On You.

The Oscar winner opened up about the importance of being at the right place, at the right time on The Ellen DeGeneres Show in 2011, breaking down the chain of events that had to happen in order for the pair to meet. “I decided to do this movie with the Farrelly brothers […] which was a big decision,” he began.

“We were supposed to shoot in Hawaii, then the movie got moved to Miami. And then we were shooting in Miami and I’d never really hung out in Miami,” he continued. “Then, one night, in the middle of the shoot, a couple guys [from the crew] said, ‘Hey, we’re gonna go get a beer somewhere.’ I said, ‘Nah, I’m not really into it’ and they kind of dragged me along.”

It’s a good thing they did because they “ended up at a bar where my wife was the bartender and I literally saw her across a crowded room. I don’t know how else our paths would’ve crossed if that didn’t happen,” he concluded. “If all those things didn’t happen.”

Despite the universe seemingly nudging Damon and Barroso together, their first encounter wasn’t exactly picture-perfect — and that’s OK.

While Damon has repeatedly said it was love at first sight, Barroso recently revealed that, while their connection was instant, it wasn’t a totally smooth meeting. Breaking her no-media rule during Australian Fashion Week in 2018, Barroso gave her first-ever public interview to Vogue Australia and revealed what really went down when her future hubby walked into her bar all those years ago.

I was working as a bartender in South Beach and he was shooting a movie there and the crew ended up in the bar one Saturday night. Matt’s story is that he saw me across the room and there was a light on me. And I’m like, ‘Yeah, it was a nightclub, there were lights everywhere!

That’s when things got a little hairy. “He had started getting recognized and asked for pictures and autographs, and then it got kind of aggressive because people are drinking and stuff, and so he came and hid behind my bar,” she continued.

He asked if he could have his drink there, away from the madness, and immediately turned on the charm: “He says, ‘Oh I saw you and I really wanted to talk to you.’”

Rather than being swept off her feet, she “put him to work with me! I said, ‘You know, if you’re going to be back here, you can’t just be standing there!’”

Damon rose to the challenge. “He had trained as a bartender for a film years before, so he started making drinks,” she recalled. “And he made me a ton of money in tips that night, because of course everyone wanted to go and see him. So it turned into a really fun night and then 15 years later here we are!”

Not only was Barroso’s life completely different from Damon’s, but when they met, she was a single mom. Luckily, the actor immediately embraced both of those facts and accepted every part of her life — no questions asked.

Sharing more of their first encounter, Barroso told Vogue Australia, “By the end of the night, he invited me to go out with his friends, but I was like, ‘I can’t, I have a four-year-old daughter, I’m not going anywhere.’”

Rather than having a negative reaction, “that was one of the things he loved, that I had a daughter. He said, ‘I love that you’re a mom and that’s your priority.’”

As for the fact that only one of them is an A-list star, that never posed any problems either. Damon even credits that with being a big part of their marital success. As he told The Guardian in 2013, “A lot of it boils down to luck: My wife’s a civilian and that takes a lot of pressure off. It’s really sex and scandal that moves those magazines, and there’s nothing scandalous about a guy who’s married and has kids,” he explained.

If they come outside where I live, they are going to die of boredom — there’s just nothing really going on that would sell a magazine.

They have a strict rule to always put family first

Soon after tying the knot, Matt Damon and Luciana Barroso welcomed daughter Isabella in 2006, then Gia Zavala in 2008, and finally Stella in 2010. In 2013, they renewed their vows, proving their love is getting stronger with age, and, in 2019, Damon got all of his kids’ names tattooed on his arm next to his wife’s name. Yup, family is everything to the couple and, from the very beginning, they’ve followed a strict rule to always prioritize family over career.

“We have a two week rule: I’m not away for more than two weeks,” the Bourne Identity star told Your Tango.

I think you need to be with the person you love as much as possible. My wife is my soulmate. I don’t like being apart from her.

How strict is this rule? So strict that Damon has actually turned down work to stay true to his vow. In 2013, for example, he put his dreams of a directorial debut on hold, turning down a job because he’d “been away filming Elysium before that and it meant leaving again for a long time, and it just didn’t work for my family.”

When the couple’s kids were younger, traveling to various filming locations was easy, but is now becoming increasingly difficult. Even so, the choice is always a clear one for Damon.

“Now they’re a little older and they’re in school and they have their lives – and their lives count as much as yours does,” he told The Telegraph. “So, ultimately, if it’s Sophie’s Choice between your kids and a movie, that’s no choice at all.”

They don’t take their connection for granted

When Vogue Australia asked Barroso about her secret to a strong marriage (2020 marks 15 years of wedded bliss for the couple), she said she has “no idea.” However, they both still feel incredibly thankful for their lasting connection.

I just know we both feel, really, really lucky to have met each other, so we don’t take that for granted. It’s life and marriage, so there’s ups and downs. But overall, it’s easy and it’s fun.

Damon agrees. Speaking with Entertainment Tonight, he joked, “I think marriage is insane! It’s a crazy idea, but I love being married to my wife,” he gushed, adding, “I’m lucky I found my wife. And I guess, maybe, if there’s any secret […] it’s to feel lucky.”

He shared a similar sentiment with The Telegraph, saying, “I found the right person and it was like getting struck by lightning — literally, everything changed in my life. My life is so much easier because of my wife and my marriage,” he continued. “Everything makes sense.”

When it comes to meeting new people and forming new human connections, we don’t have much say in how or when it happens. Damon, who was all but ready to give up on love, is the perfect example. When he was least expecting it, a number of seemingly random events lead him to his future bride.

Whether you believe in fate or not, it’s impossible to deny the luck and chance involved in so many facets of our lives. All you can do is be open to meeting someone special at any time and, once you do, that is when the work begins.

Even the strongest connection requires nurturing and, as Damon and Barroso show us, putting your partner above all else is key. Feeling lucky and grateful to have met each other also doesn’t hurt.