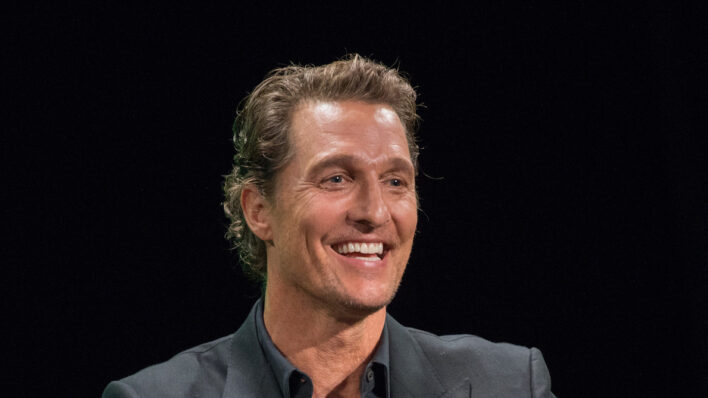 In his memoir, Matthew McConaughey bares it all, revealing the shocking traumatic events of his past. His decision to speak up and willingness to be vulnerable are especially powerful for a man of his age. What is even more inspiring is the way he decided to tackle his trauma.
By Shaoni Das    November 9, 2020

In his memoir, Matthew McConaughey bares it all, revealing the shocking traumatic events of his past. His decision to speak up and willingness to be vulnerable are especially powerful for a man of his age. What is even more inspiring is the way he decided to tackle his trauma.

It’s not always ‘Alright, Alright, Alright’ with Matthew McConaughey. In his latest memoir Greenlights, the Texan actor gets real about his experiences— the good, the bad, and the astoundingly weird. He takes the readers through a vivid journey through his childhood, adolescence, early adulthood, his movie successes and failures, his personal life, and the “McConaissance” that endeared him to the public indefinitely.

The actor isn’t just known for his complex body of work that’s featured a little bit of everything: the Dazed and Confused one-liners, the rom-com hits that made a generation of girls swoon at the screen, and the serious work that’s earned him awards across the board. Through a series of interviews, press junkets, and speeches, he’s basically created his own lingo. His language, vocabulary, and tone all reflect a breezy, no-problem-at-all, good-humored outlook on life that laughs in the face of doom and gloom.

Yet the latest memoir details some truly horrific experiences, experiences that undoubtedly weigh down on the actor. But the fact that he refuses to see them as obstacles to his happiness and fulfillment demonstrate his resilience and his unwavering positive approach to life. But underneath the optimism also lies a sense of vulnerability and sadness. This duality tells us that we all need to strike a balance in our own lives.

Matthew McConaughey was sexually assaulted twice as a teen

Matthew revealed in his book that he grew up in a turbulent home. His mother had initially believed that he was a “tumor” in her stomach and she only found out she was pregnant at the five-month mark. Both physical violence and sexual intensity was a theme in Matthew’s childhood —  he frequently watched his mother and father get violent with each other, followed by passionate sex on the kitchen floor. His parents had gotten married three times and divorced twice to each other. His father actually passed away while making love to his mother.

Matthew himself was subjected to “whuppings” as a child and had always felt like he wasn’t man enough in his father’s eyes. Yet the most visceral detail from Matthew’s book was his brief but harrowing memory of being sexually assaulted. He said:

I was blackmailed into having sex for the first time when I was 15. I was certain I was going to hell for the premarital sex. Today, I am merely certain that I hope that’s not the case.

Yet this was sadly not the only case in which Matthew felt like he was being taken advantage of sexually. When he was eighteen, he mentioned an incident in which he was “molested by a man when [he] was 18 while knocked unconscious in the back of a van.”

Speaking about one’s sexual assault experiences is dreadful in its own right. But what’s worse is that society has made a habit of stigmatizing and demeaning’s men’s experiences with sexual assault to the extent that most men feel like they shouldn’t be sharing their truth. Most men are under the false impression that what had happened to them wasn’t wrong at all; instead, they feel like they have to “man up,” pretend it didn’t happen and move on with their life.

We have to remember that fifty-one-year-old Matthew is from a generation of men that are particularly averse to speaking about their feelings. He grew up in a traditional, hyper-masculine community that discouraged men from appearing vulnerably at any instance. Yet, knowing that he has some sort of a platform, Matthew chose to address what had happened, even if they happened a long time ago and that he is a man of a certain age.

At the same time, he’s determined to keep those appalling memories at bay and approach his life with gratefulness. He said:

I’ve never felt like a victim. I have a lot of proof that the world is conspiring to make me happy.

When asked in an interview why he didn’t elaborate on the assaults beyond the few sentences, the father-of-three responded that he didn’t want those details to be the defining narrative of his entire memoir. He also wanted to describe them in a way that would be relatable or “constructive” for other people. Ultimately, there was nothing about those experiences that Matthew felt needed more explaining. He said what he needed to say and let those memories just be one of many in his book. He added:

Was I victimized in those two situations? Sure. But that doesn’t mean that I’ve carried on through my life the feeling of ‘oh I was victimized,’ or ‘oh I was a victim,’ or that those two unfortunate events have turned me into the man that I am or are even an excuse.

Furthermore, Matthew acknowledged that since he wasn’t a child when those assaults happened — he was 15 and 18 respectively — he had a better understanding of what had occurred at the time. This means that he wasn’t left feeling too confused or guilty for much of his life. He knew they were wrong and so, he received a reality check about the world before most people do. He said:

Matthew McConaughey’s sobering admission tells us that it’s never too late to speak our own truth but that we also don’t have to use a template or instruction manual when and if we decide to do it. A lot of people suffer from some tragic memories that they’d rather not recall, and if they believe that that strategy works for them, then they shouldn’t feel pressured to speak about anything. On the contrary, if speaking about the whole experience helps you cope and process, then so be it.

There shouldn’t any limits on how you tell your story and to whom you tell it. You’re in full control of how you get to share your truth and how you want to build your narrative. Matthew McConaughey had an idea of how he wanted to speak about his assaults but he also knew that his experiences don’t define him or even form any sort of basis for his book. Thus, he exercised his will in terms of what he wanted to say — and what he didn’t want to say — and just let the readers perceive his life in all its glory and tragedy. As he said:

We cannot fully appreciate the light without the shadows. We have to be thrown off balance to find our footing. It’s better to jump than fall. And here I am.