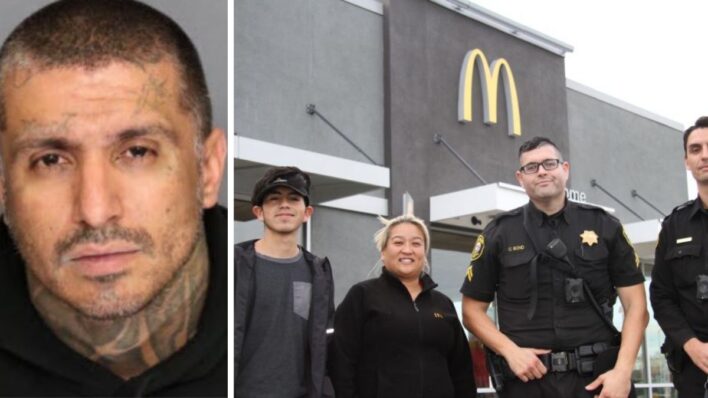 One woman is safe from danger thanks to some improvising and a few fast-acting restaurant employees. An alarming order One
By Bryan Liquor    February 24, 2021

One woman is safe from danger thanks to some improvising and a few fast-acting restaurant employees.

One woman walked into a McDonald’s restaurant in California and asked employees to call 911. She gave them her license plate number and asked for help hiding.

There was only one problem: she was not alone.

According to the Sheriff’s report, after using the bathroom and trying to order at the counter, the man who was accompanying her “demanded” that she use the drive-thru instead.

As she pulled her car up to the booth, the distressed woman mouthed “help me” to the attendant.

Recognizing that the woman was in danger, the employees sprung into action.

Deputies arrived at the scene minutes later to pull the car over. Inside, they found the “shaken” woman and 35-year-old Eduardo Valenzuela.

They discovered that he not only threatened the woman’s life with a gun, but he had been violent with her in the past.

Valenzuela was arrested and the woman taken to safety.

It turns out that McDonald’s and its heroic employees are part of the National Safe Space Network, an outreach program for youth who need health and safety.

It trains members to recognize and help at-risk individuals who enter their stores. Many, like the woman at the drive-thru, are escaping abuse or are being trafficked.

The McDonald’s team came through to protect her in a moment of duress.

We should all be ready to help

“A victim is safe thanks to the McDonald’s crew”

We all get caught up in life’s spin cycle.

If you take the time to look around and you might notice someone suffering, like the woman at McDonald’s. Someone that needs help but can’t ask for it.

You have the power to impact their situation. It doesn’t take specialized training, just eyes that are on the lookout.