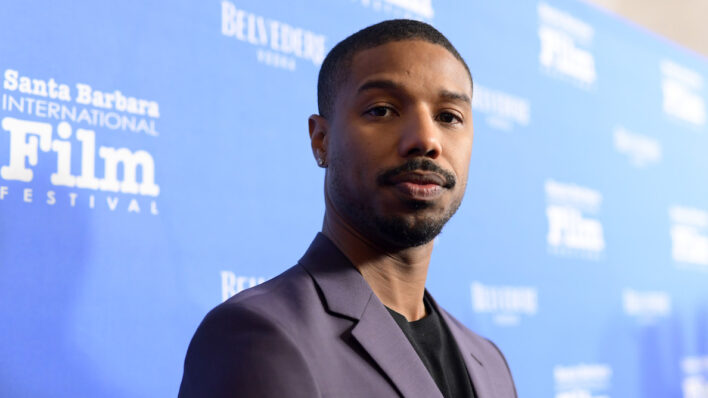 Michael B. Jordan Defies Expectations By Being Single — His Reason Will Warm Your Heart

Michael B. Jordan is part of the new wave of Hollywood hearthrobs. His decision to remain single defies expectations, but is also inspiring.
By Shaoni Das    May 6, 2020

Michael B. Jordan is part of the new wave of Hollywood hearthrobs. His decision to remain single defies expectations, but is also inspiring.

If you’re someone who’s privy to the ins and outs of Hollywood and its biggest stars, you would know that Michael B. Jordan is one of the hottest actors of this generation. We mean that both metaphorically and literally.

Since his breakout performance in Fruitvale Station in 2013, the actor has experienced a swift and well-deserved rise through the ranks. Whether it was for his captivating, terrifying performance as a villain in Black Panther or for his layered, sensitive portrayal of a fighter in Creed, he’s been astounding the audiences left and right.

He’s got directors and writers lining up to work with him, and he himself has been trying his hand at producing and developing his own projects.

The man’s got an illustrious career ahead of him, that’s for sure. But while everyone’s been raving about his acting chops, his good looks and charisma haven’t gone unnoticed either.

He’s basically attained heartthrob status at this point, which means throngs of girls are swooning over each and every one of his moves and famous women are continually expressing their admiration for his charms.

Despite the number of women that have come forward and admitted a bit of a crush on Michael, the actor has famously remained single all these years. People can only speculate on why that might be the cause, but judging from numerous interviews and confessions, the actor is following certain criteria to find the love of his life.

In an interview with GQ Magazine, Michael opened up about his dating struggles and the concerns that plague his mind when he tries to date a girl. He said that he and the girl could be just trying to have a normal conversation and getting to know one another, but it won’t be long before they get captured on camera by the paparazzi.

Then the whole meeting would snowball into a media frenzy in which the potential ‘girlfriend’ becomes the subject of public attention.

Dating a bombshell celebrity such as Michael would hypothetically make any girl’s dreams come true but at the end of the day, there are certain challenges to being in the public eye. And Michael doesn’t want his potential girlfriend to be bombarded with the pressure of being associated with him.

Furthermore, that potential girlfriend will now have to fight for her privacy as the entire world gets to know about her background, her whereabouts, her Instagram, her entire identity. The social media fan clubs would begin tracking their relationship and soon the girl will find that her entire life becomes tied to that of Michael.

Michael’s fear is that if he does pursue a relationship with a woman, he might not able to make a connection with her at all due to the media craze. Whereas most other couples can go to a venue and take all the time and space they need to build a connection with each other, Michael and his potential woman would just be surrounded by external expectations of their relationship.

So now, how do you go anywhere normal, chill, just getting to know somebody that you just met, that you may not—may or may not—hit it off at all? That part of dating is tough.

Just because Michael is a celebrity doesn’t mean that we can’t relate to his hardship in the dating realm. We’re all looking for a special someone that will truly love us for who we are, but in order to find that, we need to begin by building a genuine connection with people we meet.

If we also find ourselves getting bogged down by the weight of outward pressure and societal challenges, then dating isn’t going to seem that appealing for us either.

We might not have a string of cameras following our daily movements but we can still get upset by invisible cameras making us feel conscious about our choices. So Michael’s decision to remain single isn’t just based on avoiding the attention — he genuinely wants to wait it out till he finds that perfect connection with his special someone, a connection that exists and thrives outside of the media blitz.

Michael has admitted that there are plenty of options when it comes to meeting ladies but it’s certainly not been an easy ride finding a special one. As mentioned above, being a celebrity massively affects the nuances of the dating world. As he tries to figure out those nuances, he’s going to keep his head down and “build this empire”.

In the same GQ interview, the actor mentioned that his career is going great and that he’s found maturity in himself over the last couple of years. However, that same level of maturity hasn’t translated to his dating life as strongly.

I’m very mature and advanced in a lot of areas of life. Dating may not be one of ’em. My personal life is not. I don’t really know what dating is.

Just because he is a handsome, charismatic, highly sought-after man doesn’t mean he’s any better at maneuvering the dating game any better than us. Like many of us, he is focused on fulfilling his dreams and reaching new heights in his career.

And it takes a lot of strength to admit something like this openly. Everyone expects a male celebrity like him to be dating or womanizing–so much that it feels odd when they do not comply to our expectations.

“I want to be worldwide,” he told GQ. He wants to model his career after the likes of Will Smith, Tom Cruise, and Leonardo DiCaprio.

Michael wants to emulate those personalities not only because they’re good actors but because he believes they are hard-working, focused, decisive, and patient. He knows that those actors didn’t attain A-list status until they did the work; they had to make hard choices and big decisions to follow their dreams and become worldwide superstars.

Therefore, he too wants to follow in their footsteps and do the work of getting his name out there. So far, he’s already achieved so much, but he does have quite a while to go before he reaches that level.

He also just wants to earn enough money so his family never has to worry about a cent ever again. Instead, Michael wants to accumulate enough wealth to pass it down generations.

I want to make this thing so my family ain’t gotta worry about nothing. I want intergenerational wealth. I’m going to have fun writing my will.

Dating, in the meantime, can take a backseat while he pursues his ambition of global fame and wealth. He’s admitted that dating is not something he’s particularly good at, but it could very well be that it’s also not something he’s put in his priorities list. Especially when he’s set himself some very high goals.

In doing so, he shatters preconceived notions we may have when it comes to the male experience of dating. Just because it can seem relatively easy for a good-looking and famous man like him, it doesn’t mean that it’s what he wants.

Authentic, long-lasting romances are worth waiting for

Although Michael has been linked with a number of women in recent months, he’s still officially single. And from the looks for it, it’s not for a lack of trying. Many of us are already familiar with the trials and tribulations of dating in the twenty-first century, so Michael’s pains in his journey to find the one definitely might ring some bells.

His logic holds up 100%. If we’re not willing to put the time in to build authentic connections with people we’re interested in, then our potential relationship may not survive external pressures.

Authenticity is something that has preoccupied him. As he admits in Jay’Z’s Footnotes for 4:44, he wants something real, like what his parents have.

One of my biggest fears is ending up being alone. Not having what my mom and dad have because the times are so different and my circumstances… I don’t want to work less, you know?

And that is the price of fame. “So the more I work, the more, you know, seen or known you are, you know the more you’re sought after and you know the less genuine people you run across,” he confessed.

This complex relationship between ambition and romantic fulfillment is something Michael is acutely aware of. And that’s why he prefers to be careful and selective when it comes to connections.

The right connection will find you when you are ready

Meanwhile, Michael’s decision to focus on his career objectives as he waits to form that perfect bond is also something we can learn from. Sometimes love is best left to chance: if we focus too hard on it or we get too desperate, then it might just not work for us and it might leave us feeling more frustrated.

But if we actually concentrate on ambitions and dreams in which we can actually get ahead, then the rest will take care of its own. And that special person will walk into your life when you least expect it.