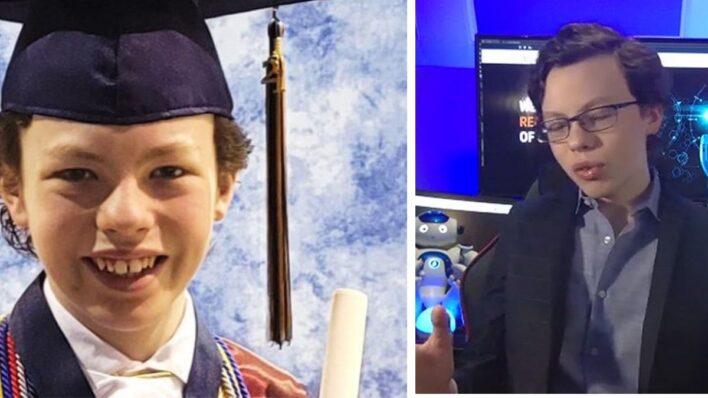 One seriously smart kid is using his gifts for life-changing work while keeping his childhood roots. Curious kid wonder For
By Bryan Liquor    May 11, 2021

One seriously smart kid is using his gifts for life-changing work while keeping his childhood roots.

For as long as he can remember, 12-year-old Mike Wimmer of Salisbury, North Carolina, has been a curious kid.

Talking to WPTC, he recalls that “At 18 months old with my first iPad, I started to wonder, ‘Well, how does it work?'”

His mother Melissa tells CNN that her son has always been determined. “If one door’s locked, he’ll find out another way around to figure out how to accomplish his goals,’ she said.

Not only was it true that he was determined, he was a genius. At four years old, he was inducted to MENSA, an elite-IQ society for the young and gifted.

At five, he was teaching himself computer programming by watching online videos. During downtime, he worked on learning dozens of languages.

Apparently, that was just all just an appetizer for the whiz-kid Wimmer. Entering high school as a pre-teen is already impressive, but it wasn’t enough for the young genius. Why not cram high school and college into one year?

“With COVID, of course being locked in, I figured out, hey, might as well take some more classes, right? So I actually did four years of school in one,” he told FOX5NY.

“It was kind of a, hey, if I take a few more classes I can get an associate’s degree. Why not?”

However, he’s quick to point out that it wasn’t because his parents – Mark and Melissa – pressured him to.

“My parents did not push me in any way, shape or form, academically, at all. And they didn’t push me like, ‘Hey, you’re going to do good in school and you’re going to be a doctor or a lawyer or whatever.’ They really let me flourish and find my own pace and my own path,” he said.

At the year’s end, Wimmer obtained both his high school and associate’s degree – with honors – in the same week!

Next on the list for Wimmer: changing the world.

He’s created two tech start-ups, ‘Next Era Innovations‘ and ‘Reflect Social‘, which use A.I and advanced technology to transform how we interact with the world.

“I really want to make things easier for people, especially whether this IoT thing makes it easier for the elderly or the handicapped,” he explained to WCNC.

“My entrepreneurial goal is to build technology that enables people to live better lives,” he said.

Our future is bright

Wimmer also wants you to know that although he’s raced through school, he hasn’t skipped being a kid.

‘I am still a kid and still do 12-year-old things. I pride myself on being able to have a business Zoom meeting one minute, and the next, logging a couple of miles on my knees while playing with Hot Wheels,” he says.

Recently, we’ve seen brilliant kids who’ve bested Einstein, are math champs with others destined for space. However, all of our kids have world-beating brilliance. Let’s encourage them as they enjoy their youth.