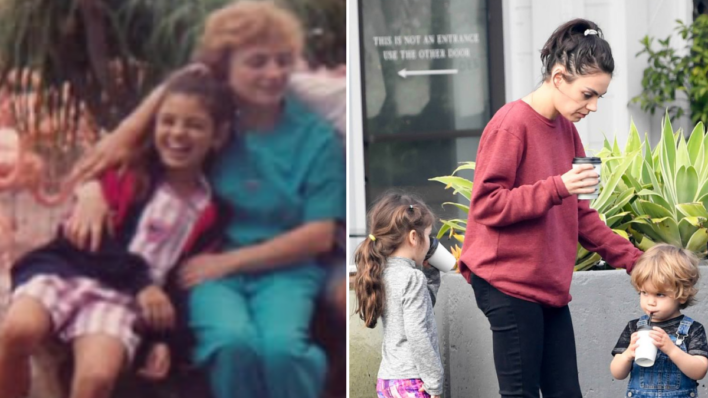 After going through a tough childhood, Mila Kunis explains why she wants her children to work hard and earn their own wealth.
By Shaoni Das    September 17, 2021

After going through a tough childhood, Mila Kunis explains why she wants her children to work hard and earn their own wealth.

Mila Kunis is the envy of the entire planet. There isn’t a single box the 38-year-old actress doesn’t check — she’s gorgeous, funny, charismatic, beloved by her audiences, flush with cash, and has one of the most wholesome, well-adjusted marriages in the industry.

Naturally, as she’s a person of privilege and immense wealth, everybody automatically assumes she doesn’t have to worry about a single thing and can coast through her day-to-day without any fear of consequence. Of course, this is accurate to a large extent, but it doesn’t mean her celebrity doesn’t come with its own share of troubles and room for error.

For example, how do you intend to raise your children amid ceaseless scrutiny? How can you ensure they’re able to lead an ‘ordinary’ but meaningful life? How do you guarantee they can become self-sufficient in their own right? How do you share your success with them without indulging them with all the riches?

These are just some of the questions Mila Kunis has grappled with since becoming a mother, and her approach to the issue speaks volumes about her work ethic and journey.

Mila’s decision not to spoil her children stems from her “poor” upbringing.

Mila might be commanding multimillion-dollar salaries in each of her movies these days, but her childhood was a far cry from a bed of roses. She was born in the Soviet Union on August 14, 1983, in a politically turbulent time featuring a rising tide of antisemitic sentiment. That’s why the family, being Jewish, immigrated to the U.S. in search of “freedom.” The parents knew there wasn’t a “future” for their children in communist Russia, so they made the needful choice to pack their bags and voyage across the ocean to explore the American dream.

Her dad Mark and mom Elvira had maintained reputable careers in Ukraine — that of a mechanical engineer and a Physics teacher, respectively — but had to give up their high-earning professions upon moving to the U.S. “They came to America with suitcases and a family of seven and $250, and that’s it,” Mila told Glamour magazine.

My parents went through hell and back. They came to America with suitcases and a family of seven and $250, and that’s it […] But growing up poor, I never missed out on anything. My parents did a beautiful job of not making me feel like I was lesser than any other kids.

They worked full-time and also attended college full-time. Her mom worked in the thrift shop as a “box lady,” whereas her dad worked a slew of odd jobs to support the family: cab driver, painting houses, delivering toilets, so on and so forth. “Whatever he could do, he did,” she said. In addition to their daytime employment, Mark and Elvira went to night school to learn English. Over time, their proficiency with English improved, and they were able to advance their careers and achieve some financial stability. Elvira worked her way up to become a manager of a Rite Aid, and Mark invested his income into owning a few taxis. By the time Mila reached her teenage years, the family could buy a condo and car.

Initially, young Mila didn’t have the slightest clue about why her family moved or why they toiled unflaggingly all day. Her parents worked to the bone to ensure that Mila and her siblings weren’t aware of their financial hardship and still had the necessary resources to pursue their dreams and live a substantial, stress-free life. Of course, as a child, you don’t understand the complexities of managing a household under a tight budget. You are in the dark about the numerous compromises and sacrifices being made to sustain your lifestyle. You are more concerned about appearances and whether or not you measure up to your peers — money is the least of your issues. Likewise, Mila never felt internal pressure about providing for her family; she felt as normal as any other kid.  “My parents did a beautiful job of not making me feel like I was lesser than any other kids,” she explained.

This is why she insists on her children being “self-made”

Mila’s impoverished childhood plays a seismic role in how she parents her young ones, Wyatt and Dimitri, on a daily basis. She had to work from the ground up to amass wealth and build her legacy, so why should her children have to ride on her coattails to accomplish the same? Both Ashton and Mila are painfully conscious of the fact that their kids will have a significantly more luxurious life than they ever did; therefore, they don’t want to spoil them irrationally to the point that they become “a**holes.”

It’s a matter of teaching them from a very early age that, you know, ‘Mommy and Daddy may have a dollar, but you’re poor,’

Mila Kunis on The Kyle and Jackie O Show

Mila said on the Australian radio podcast The Kyle and Jackie O Show that this is a subject she and her husband discussed extensively prior to starting a family. It’s imperative to Mila that Wyatt and Dimitri are “aware of what a dollar is worth” and that they don’t take any of their privileges for granted. They need to work as patiently and persistently as any other person in the country. Just because their parents are worth a bundle doesn’t mean it’s their money per se; they still have to start from scratch to be able to savor the riches. “Nothing’s been handed to us,” said Mila. That’s why she makes it a point not to spoil her children, emboldening them to find their own path in life.

Of course, the children are still quite young, and it’ll be a while before they start embarking on higher education and career development. Yet, it’s still strikingly refreshing of Mila to establish rules from the get-go and have a clear vision of how she wants to raise her little ones. In her view, being “self-made” doesn’t have to be about being flat broke; it’s about being relentlessly dedicated to your work and give your best in every instance. It’s about being mindful of what it takes to earn a dollar and what it takes to spend the dollar.

Grind hard and make it happen

Time will tell whether Mila and Ashton stick to their arrangement and can effectively instruct their children about the merits of working hard and being independent. Yet, Mila’s outlook on wealth and work tells us that nothing is achieved in life without a grind. Of course, people require different types of support systems to function and thrive, but at the end of the day, you do have to put your head down and just do the damn thing.

Family wealth is a beautiful thing, and to some extent, there’s nothing wrong with spreading some of the riches among your loved ones. It’s one of the reasons why people want to become rich in the first place, but as long as you responsibly distribute your wealth without over-pampering someone, you’re in a good spot.