Home Self Models of All Sizes Don Lingerie to Transform Times Square Into Body... 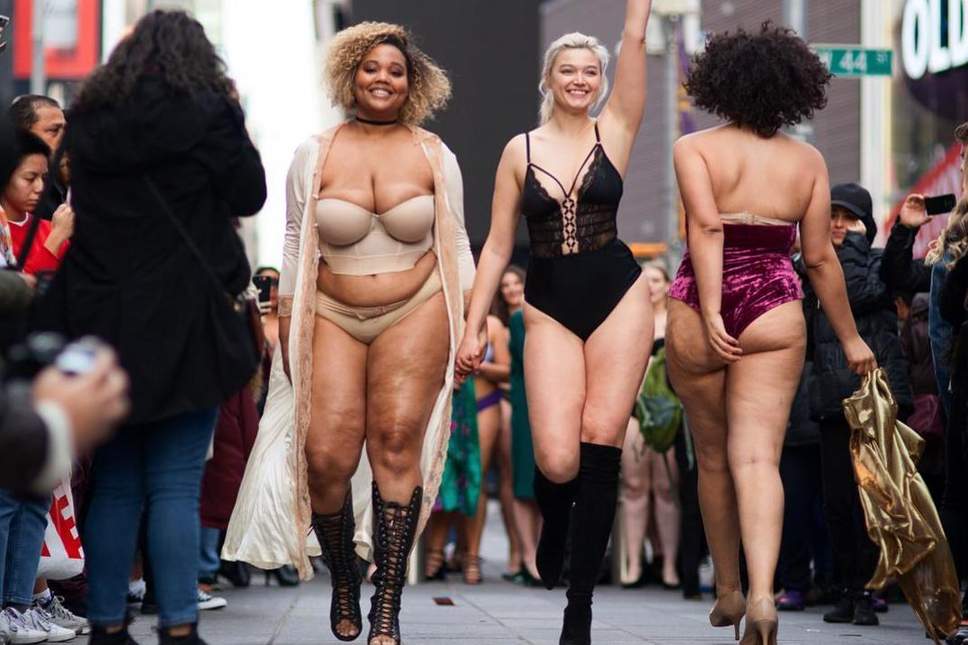 The famed Victoria’s Secret Fashion show aired this past weekend and, year after year, one thing was notably missing from the show: body diversity.

In an interview with Vogue, Ed Razek, the chief marketing officer of L Brands (which owns Victoria’s Secret) gave a statement where he shot down the idea of transgender of plus-size models ever gracing the Victoria’s Secret catwalk.

“No. No, I don’t think we should. Well, why not? Because the show is a fantasy. It’s a 42-minute entertainment special. That’s what it is. It is the only one of its kind in the world, and any other fashion brand in the world would take it in a minute, including the competitors that are carping at us.”

Rightfully so, plus-size models like Khrystyana Kazakova were not thrilled to hear the industry leader’s thoughts on inclusive casting. Kazakova told New York Post, “I was talking with my friends like, ‘Oh my gosh, it makes me feel horrible.’ A lot of people feel unattractive after watching it.”

As a result, the former “America’s Next Top Model” contestant decided to stage a guerrilla-style fashion show, where women of all ages, sizes and genders were invited to walk down Times Square as a response to the lingerie event.

“I know that there are people flying from Italy, London, Melbourne, and Canada,” Kazakova shared.

Despite the chilly temperatures in New York, over 200 women of all backgrounds walked in the show, with wardrobe provided by plus-size womenswear brands King Size, Swimsuits for All and Woman Within.

“It is in no way anti-Victoria’s Secret,” Kazakova said in a statement to The Independent, “it was just a way to support women who may not feel catered to. New York is ready for the change and the chance to embrace all kinds of beauty.”

The goal was really to create a fun, inclusive event that helps even a small margin of people to feel more comfortable in their own skin. For Kazakova, “body positivity is not just about being curvy, it’s about being yourself. It doesn’t matter if you are curvy, petite, trans, athletic, over 40, over 50, it’s just about knowing you are beautiful.”

How to Stop Drinking Alcohol: Curb Your Drinking With These 6 Tips

Bouncing Back from Burnout: A Comprehensive Guide

Biohacking: A Complete Guide to Becoming a Biohacker