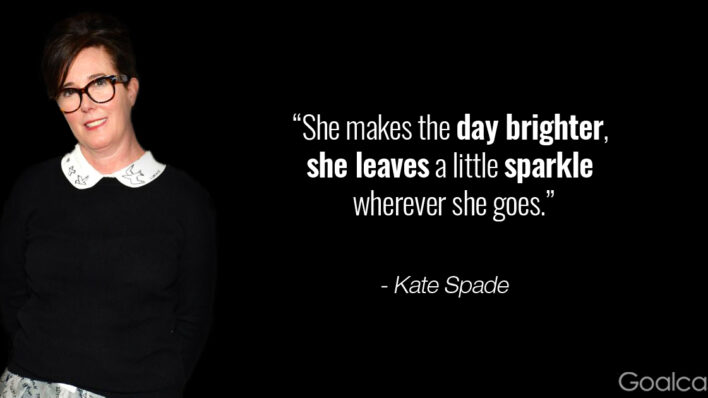 The successful American fashion designer Kate Spade was the founder and former co-owner of the brand Kate Spade New York.

Unfortunately, on June 5, 2018, Kate was found dead in her Manhattan apartment; officials announced that the designer had committed suicide. In her early years, after getting a degree in journalism, Spade worked for Mademoiselle magazine. Already having a passion for fashion, she left her journalism career in order to pursue another one in design. In 1993, with her husband’s support, Kate Spade launched her own line of stylish handbags. The products quickly became popular, and her company turned into a fashion empire.

Spade didn’t totally abandon her passion for writing, so while being a successful fashion designer she also wrote three books – Manners, Occasions and Style – where she shared her personal style and philosophies.

Here are 16 Kate Spade quotes on style and self-confidence. If you’re as honest and fair as you can be, not only in business but in life, things will work out.

She makes the day brighter, she leaves a little sparkle wherever she goes. You can never be overdressed or overeducated.

I don’t think that fashion is something people encourage in a lot of schools, but I think they should — it’s all about personal expression.

She is quick and curious and playful and strong.

In order to lead a fascinating life one brimming with art, music, intrigue and romance; you must surround yourself with precisely those things.

She’s a dreamer, a doer, a thinker. She sees possibility everywhere.

Surround yourself with the things you love. Discard the rest.

She makes grand gestures instead of small talk.

Style is the sum of so many things – beginning with a sense of who you are and having self-confidence. I’ve never been a millionaire but I just know I’d be darling at it.