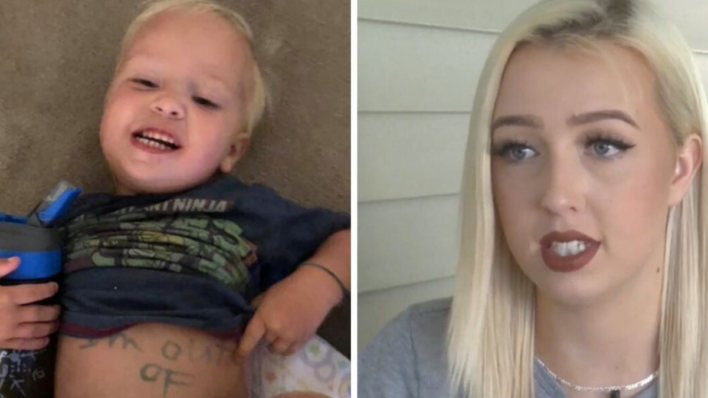 A note written in marker on a baby’s stomach made a mother very upset and eventually led to the teacher’s
By Joel Balsam    September 15, 2021

A note written in marker on a baby’s stomach made a mother very upset and eventually led to the teacher’s firing.

Heather Chisum, a single mom in Sanibel Island, Florida said she was “furious” when she picked her 18-month-old son Milo up from daycare only to find a note written in marker on his stomach.

“Am I right to be furious about this? Or am I overreacting? I really need your opinions guys, because I’m about to barge in this daycare tomorrow morning and have some words,” she wrote in a January 2020 Facebook post.

The note said, ”Mom I’m out of diapers pls read my report.”

This wasn’t the first time

Chisum explained that the Florida daycare her son attends usually puts a report in his lunchbox explaining how his mood was that day and whether or not he needs diapers. She admitted that she forgot to read the report one day, but that doesn’t explain why the teachers didn’t let her know verbally.

“In the very worst case scenario, I can’t see anything other than ‘need diapers’ needing to be written,” she wrote. “Why a big long message needed to be written across my sons stomach is beyond me. OR WRITE IT ON HIS DIAPER OR YA KNOW, JUST TELL ME?!?”

Chisum added that she was planning to take her two kids to the beach that day, but couldn’t because the marker wouldn’t come off.

“The best part???? THIS ISN’T THE FIRST TIME,” she wrote. “They’ve done this several months ago too.”

“Help. Am I over exaggerating? Give it to me straight people.”

A mix of support and criticism

In the comments, people were mostly on Chisum’s side.

“I’m not even a parent and this makes me livid, I would be swinging on whoever decided to do that smh,” said Liah Santos.

But others allegedly criticized Chisum, saying she’s negligent for missing the report.

“I missed one report, I wasn’t being hounded over and over to bring diapers and I just kept ignoring them. I missed the report and this woman’s next course of action was to write across my entire sons torso. Like I said, this was the next course of action OVER a phone call, verbal warning, text, or email,” she wrote.

In a second post, Chisum said others criticized her for spending her money on makeup instead of her kids.

“I have NEVER and will never put my needs before my children’s,” she said, adding that she had extra diapers in the closet. “No one knows my finances, or what I spend my money on, and it’s NONE of any ones business.”

In response, the daycare apologized to Chisum and fired the teacher responsible.

“The school has taken immediate action to remove the teacher from the school. We are reviewing protocols already in place to ensure that nothing like this occurs again,” said Cindy Carter DeCosta,  executive director, according to News-Press.

Still, Chisum said she would be seeking out a new daycare.

“I’m so beyond frustrated,” she said. “I will no longer take them there.”

Your gut will tell you when you’ve been wronged

Chisum had every right to be upset. Clearly, the teacher had no business writing in marker on a baby’s stomach like that and could have gotten the diapers Milo needed in a much more reasonable way, including by giving Chisum a call.

Beyond being a tale of a mother’s frustration, this story shows that if you’ve been wronged, your gut probably knows it. No need to ask for everyone’s opinions if the wrongdoing is as clearcut as this.