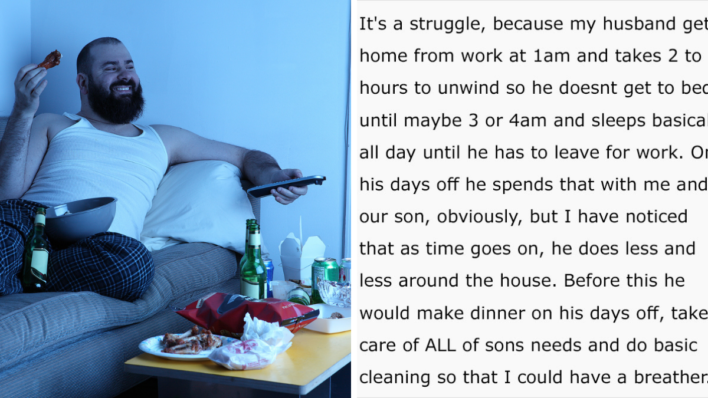 When a mother and a wife says, “I need help,” you better listen. Not helping around the house Try as

When a mother and a wife says, “I need help,” you better listen. Not helping around the house Try as

When a mother and a wife says, “I need help,” you better listen.

Not helping around the house

Try as she might, a mother of a four-year-old couldn’t convince her husband to take on more household chores. So, she did something that might be seen as drastic.

In a post in the Reddit forum AITA, the mom explained that she’d been with her partner for eight years, including 15 months married — but he’s helping out less and less while she takes on the heavy lifting in addition to her full-time job.

“Before this he would make dinner on his days off, take care of ALL of sons needs and do basic cleaning so that I could have a breather,” she wrote. “Now he doesn’t make dinner at all, falls asleep on the couch by 7 so I have son duty 24/7 and hasn’t lifted a finger to clean in weeks. So on my 3 days off a week, I end up having to deep clean my entire house because I dont have time to do anything on my work days aside from the bare minimum.”

She tried to ask for help

The mom said she recently asked for some help and he said ‘yes,’ but not for long.

“He happily obliged for all of 30 minutes before taking off to go help a buddy with his car and didn’t do jack squat after returning home because he ‘was tired.'”

The mom said she told him she needed a break, but he didn’t understand her true needs.

“His way of comforting me was by hugging me and saying ‘You’re doing such a good job.’ Didn’t offer to help or anything.”

A solo vacation to teach him a lesson

So, the woman devised a plan.

She asked her mom to take her son for four days while she took a solo trip to the cottage 58 miles away.

“My husband started texting me last night asking where I was. I told him the cabin. He asked where our son was so I told him. He then started going off about how this is selfish of me and that if he had realized I wasnt merely stressed out that he would have helped out more.”

The husband said that he is stressed and tired as well and could have used the vacation too. He also claimed that she communicated her needs poorly.

“But the thing is, I straight out told him I needed a break. I asked him for help. He disregarded it all. But now I’m curious if I’m an AH.”

No, she’s not the AH

In the comments, Redditors overwhelmingly supported the mom.

“Does husband not have eyes? Can he not see what needs to be cleaned, tidied or cooked? Does he not know his child’s needs? If he didn’t before maybe his “four day vacation” without a child to care for or a wife to clean up after him opened his eyes,” wrote ToTwoTooToo.

BroadElderberry supported the mom and shared their own experience: “My SO can be the same way. I’ll say ‘my back hurts from shoveling snow’ and he’ll want to go walk around the mall for hours. I’ll say ‘I’m overwhelmed from doing so much around the house’ and he’ll give me the same ‘you’re doing great.’ And then when I finally have a break down, it’s ‘I didn’t know it was so bad, you didn’t tell me!’ No. We tell you. We just don’t make a broadway production out of it, so you use that to pretend that it’s ‘not so bad.'”

Despite American women working just as much as men in their careers, studies show that they still take on more of the household chores. And that isn’t fair.

Child rearing, living together and being in a relationship is takes more than one persondoing the work. And while verbal support is nice, actual physical help is even better.

Hopefully, this woman’s husband has since adjusted his behavior.