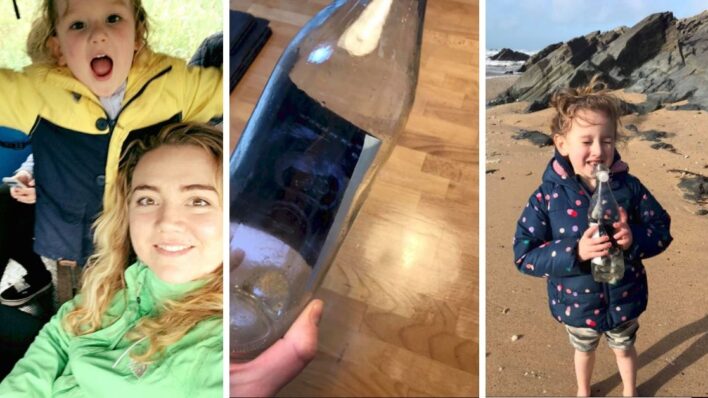 Ashley Challinor found a bottle containing a baby scan and immediately assumed the worst. But this story has a happy ending.
By Aly Walansky    May 28, 2020

Ashley Challinor found a bottle containing a baby scan and immediately assumed the worst. But this story has a happy ending.

When Ashley Challinor, 32, and her 6-year-old daughter Ava went on a walk by the seaside on Fistral Beach in Newquay, Cornwall, little did they expect to find a bottle with a message. “Ava said ‘mummy, there’s a smashed bottle’. She likes learning about the environment and I thought that I’d better get it.”

“It was lodged in the sand and to me at first just looked like a broken bottle. I pulled it out and thought ‘gosh, it looks like a message in a bottle’,” Ashley told Cornwall Live. “These sorts of things are once in a lifetime and you usually only hear about them in books or movies.”

When Ashley saw what was inside, she immediately feared that there was some tragedy tied to its content. Fortunately, that was not the case.

Inside the bottle was a picture of a baby scan and a note that had been turned to mush by the seawater. Ashley, a hotel manager, immediately thought the bottle had been sent to sea as a way to commemorate a stillborn baby or a miscarriage.

I knew what it was instantly. My first thought was that it was something quite sad, maybe that’s why it was thrown into the sea. I tried to see if I could find a name but that bit of the scan had been damaged by seawater.

In any case, Ashley wanted to make sure the parents, whoever they were, could have a chance to reclaim it. She noticed the scan had the hospital name on it so she shared a photo of the scan online and asked who it belonged to, saying she would throw it back in the sea if no one came forward.

The story of her find was initially reported on Cornwall Live, which helped to resolve the mystery.

The owners of the scan, Rhiana Hockley and Fletcher Gallagher, had actually sent the bottle to sea after they found out that they were expecting a girl, due in June 2020. The young couple had followed their old tradition of dropping bottles into the sea with their own messages.

We threw it into the sea in February at Fistral Beach, it’s somewhere we drop off bottles every year. We’ve done it since we were 16, this one was to announce we were having a baby.

Mum-to-be Rhiana says she hopes to meet Ashley, and then they can throw that bottle back in the sea together. She said: “We’re hoping to get down and meet her so we can throw it back in together when all this is over.”

“It’s nice for them to know it’s not bad news. This will be our first child and everything is going well, she’s due next month. We don’t have a name yet, that’s still in the thought process,” Rhiana said.

Ashley added that her daughter, the one who spotted the bottle, has been looking forward to meet them too.

Ava has been thrilled by the whole thing, she thought it was amazing. She didn’t really understand about the picture, she’s only six and I didn’t want to go into too much detail.

A lesson in compassion

Ashley’s first thought to reunite the scan with the owners is a moving testament of compassion. She did not know who or where they were, but she knew that the baby scan must have meant something special.

Her blind compassion also brought two families together. Rhiana and Fletcher will certainly have a special story to tell their baby girl when she grows up.

This also lets us know that leading a life with compassion can have unexpected outcomes.