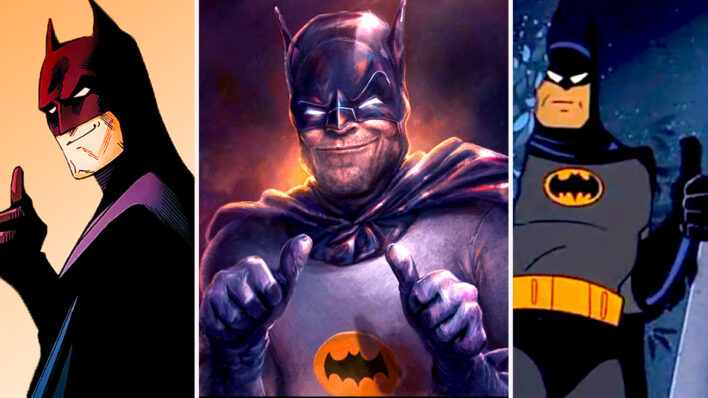 5 Powerful Batman Quotes to Inspire Light in Your Dark Nights

He may be a Dark Knight, but as DC’s most popular superhero, creators have used Batman as a true inspiration. Here are some of his best quotes in comics and film.
By Sarah Vanbuskirk    April 10, 2022

He may be a Dark Knight, but as DC’s most popular superhero, creators have used Batman as a true inspiration. Here are some of his best quotes in comics and film.

Superheroes inspire us with their bravery, tenacity, and commitment to the greater good. They fly through the sky, scale skyscrapers and in their stories, do the work that normal people can’t; as such, they inspire us to be better than what we are, to be something… more. Batman takes this to a new level.

As perhaps the most proficient crimefighter and purveyor of justice, Batman — unlike some of his contemporaries like Wonder Woman or Superman — but “just” a man. It’s easy to be a hero if you’re a super, but Batman must be more than “special” because of powers, he has to will himself to be something better.

Bruce Wayne, Batman’s alter ego, was a regular boy… well, if you consider being a billionaire “regular.” After the tragic and brutal murder of his parents, he decided to train his mind and body to rid Gotham City of crime, and to ensure that the justice denied his parents would be meted out fairly. Sure, he had a fortune and his butler Alfred, but Batman transformed himself into a superhero with grit, sweat, blood and tears. That’s one reason this DC Comics hero has captivated audiences since he debuted in 1939.

Batman is not magical or immortal. Instead, he is a man armed with ingenious gadgets, impressive cunning and a finely-tuned mind and body trained for battle. And yet, he isn’t seen as the most inspirational hero, given his dark beginnings and persona. But throughout his history in comics and on-screen, he and his Bat-Family have shared some deep thoughts on where to find light in even the darkest nights.

“It’s not who I am underneath, but what I do that defines me.”

This quote, from Batman Begins is akin to the well-known adage, “Your actions speak louder than words.” The main idea is that you can talk a good game but it’s your actions that truly define who you are and how you’ll be remembered.

This Batman Begins quote takes this concept deeper by making the point that the identity of the person in question, and all the assumptions people might make about them, are also less important than the actions of the person. In other words, it is what a person does that matters, not what they say or the person they appear to be. This quote reminds us to take action to back up our beliefs with our actions, and to define ourselves by the confluence of both.

This quote, from Batman #624, “Broken City, Part Five,” by Brian Azzarello and Eduardo Risso, teaches us that we should focus on the person we want to be.

Only you are stopping yourself. Only you know the person underneath who you need to be. This powerful Batman quote, which comes from a seminal run in his long history within comics, encourages us to not be afraid to reinvent ourselves, to create who we are, and be the person we want to be. Rather than hiding who we are or relying on an identity that may not fully express our true identity or intentions, this quote inspires us to free ourselves to live the life we believe is right for us.

So, create a new face, a shield or armor, or whatever else makes sense for you to be able to free yourself to be truly yourself, to shed the expectations of others, and exceed your limitations. You can create the person you want to be and live the life that is your dream. You get to define yourself, go after your dreams, and present yourself however makes you feel comfortable and free.

“Why do we fall? So that we can learn to pick ourselves back up.”

Perseverance, commitment, resilience and tenacity are at the heart of this quote, given by Alfred in Batman Begins (because even Batman needs reminding sometimes). These words teach us that failure is not what we think it is. Rather than something to be ashamed of or dread, failure can be seen as a chance for learning, courage and redemption.

Batman never gives up in his crime-fighting efforts. He is relentless in his pursuit of justice, regardless of whatever obstacles, setbacks or physical pain he faces. Not giving up or letting setbacks get us down is the mark of true heroism. Getting back up, again and again, is the key to earning honor and being a strong, inspirational person. And you don’t need to be a superhero to do it. All you need is to just keep getting back up and keep on trying.

“A hero can be anyone. Even a man doing something as simple and reassuring as putting a coat around a little boy’s shoulders to let him know that the world hadn’t ended.”

You don’t have to be famous or try to change the world in big ways to have a meaningful impact. Everyday small actions of kindness, love, support and caring matter, too. This quote, from the film The Dark Knight Rises, honors those daily moments when we give each other a hand, when parents care for their kids, when friends look out for each other, when kids take care of their parents, when teachers educate students, when strangers hold open a door, or when a smile is given simply to brighten someone else’s day.

We don’t have to be the star or the alpha or the boss or the ringleader to make a difference or to have an important role to play. So, celebrate and cultivate those little moments that add up to a life well-lived.

“All men have limits. They learn what they are and learn not to exceed them. I ignore mine.”

Excelling is all about challenging yourself, thinking creatively and taking yourself to places others might not dare to go — and might discourage you from attempting. This quote, from Detective Comics #663, by Chuck Dixon, Graham Nolan and Scott Hanna, pushes us to ignore limits, rules and preconceived notions when they constrain us and our ultimate goals.

RELATED: 120 of the Best Anime Quotes of All Time

The core of this idea is to find inspiration in possibility and to say “yes” rather than accepting the standard expectations and the conventional ways things are done. It also ties into another related Batman quote: “Everything’s impossible until somebody does it.” Essentially, the goal is to become limitless both in your frame of mind as well as in practical terms, by pushing beyond what even you can imagine.

That is at the very core of being Batman — and it can be for any hero, super or otherwise.