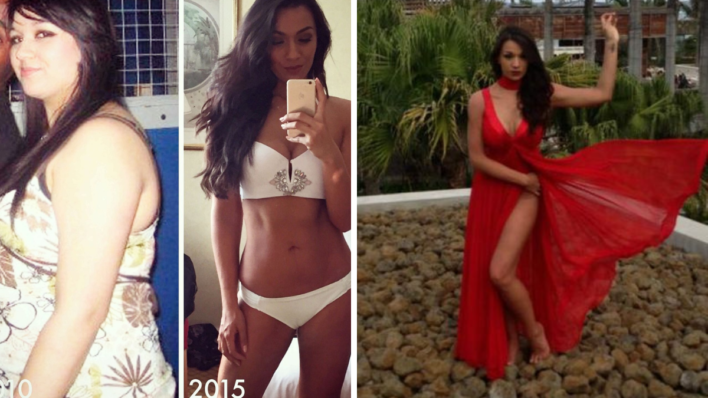 Dumped by her boyfriend and mocked by his friends, one woman used the experience to glow up like a rock
By Bryan Liquor    August 31, 2021

Dumped by her boyfriend and mocked by his friends, one woman used the experience to glow up like a rock

Dumped by her boyfriend and mocked by his friends, one woman used the experience to glow up like a rock star.

When Nadina Knight’s boyfriend, Tim, dumped her for being overweight, in a way it was relief from constant abuse.

Writing about her experience in the Sun, she recalled that “His friends called me “chubby” and after he finished with me, he pointedly went out with a girl who was really slim.”

Even Tim’s ex-girlfriend piled on, calling him a ‘chubby-chaser’ on Knight’s Facebook page.

As her self-esteem sunk, Knight recounted “drinking a lot and my eating was out of control.” At her peak, Knight tipped the scales at 224 pounds.

At that point, she had a choice: stay down or fight back. Knight took the nice girl gloves off.

“The break-up — as awful as it was — spurred me on to do something about my weight. I’d had enough of the fat jokes.”

And so, driven by renewal and revenge, she took massive action.

The first step of Knight’s journey started where it does for most…Google.

‘The first thing I did was search Google for healthy living tips. I didn’t want to diet like so many of my friends had done, I just wanted to lose the weight in a healthy and sustainable way.’

With that, she swapped in a steady dose of exercise.

” I also started going to the gym because I realized I needed to tone up my wobbly skin now that I had started losing weight.”

‘Losing weight’ is putting it lightly. Knight lost 98 pounds in eight months and shed four dress sizes. After that, the old Nadina was gone for good.

‘I also go to the gym about three times a week. I won’t ever let myself get to that stage again.’

Yet one of her most satisfying moments came when she bumped into Tim’s mom at the pharmacy.

“She said: “I didn’t recognise you.” I was absolutely thrilled,” she recalled.

“I’m sure she went home and told Tim how amazing I looked.”

For Knight, it’s only been onward and upward.

With her slimmed-down swag, Knight went on to win both Miss England and Miss Northampton. She’s also pursuing a promising singing career.

Knight tells the Daily Mail that it’s been surreal.

‘The whole Miss England experience was incredible. I was with everyone for four days straight and you really start to become a family. I enjoyed myself so much.”

Looking back, Knight says that her journey has changed her for the right reasons.

“It has given me the confidence I didn’t have before, I’m happier and most importantly I’m healthier which was my main goal”

As for Tim, that ship has long sailed.

“It’s too late for him now and there’s no way I would have had him back anyway.”

When you’re in a rut and it feels like the world is piling on you, it can feel futile. In reality, it’s the universe telling you to take control. Small minds won’t understand your big will.

And, if you’re Nadina Knight, they won’t recognize you either.