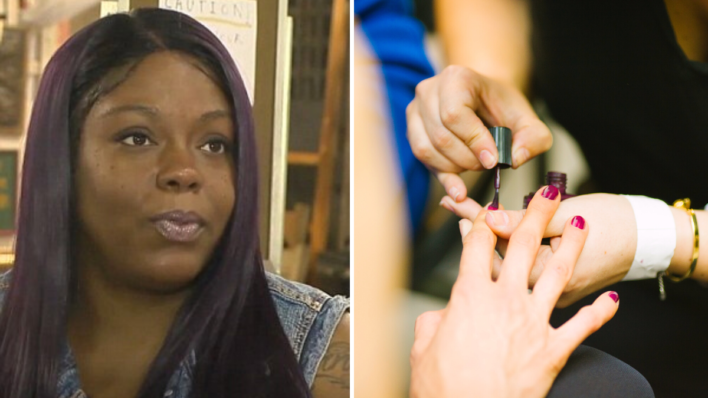 One Walmart employee created an impromptu nail salon in the Subway seating to help another lady out.
By Sophie Tolias    July 5, 2022

One Walmart employee created an impromptu nail salon in the Subway seating to help another lady out.

Angela Peters was excited to get her nails done. But when the Michigan resident made a trip to a local nail salon, the employees turned her away.

Because of her cerebral palsy, Peters’ hands sometimes shake, so a manicure would take a bit more precision than usual. Unfortunately, the salon was not up to the job. But a kind bystander was.

Why a Nail Salon Refused to Give a Woman a Manicure

After overhearing the conversation, Walmart cashier Ebony Harris, who has helped Peters shop in the store several times, felt compelled to step in and offered to paint Peters’ nails.

I stepped in because I didn’t want her feelings to be hurt and her day to be ruined.

The pair picked out a blue polish and set up a makeshift salon in the store’s Subway seating area.

“Angela was very excited, she started smiling and laughing and was super happy. After she got her nail stuff, we just sat down at Subway and I painted her nails,” Harris said.

Another Walmart employee also stepped in to help.

“One of our other associates saw what was going on and got some white polish and some glitter polish, so we gave her a cute little simple design,” Harris said.

Subway employee Tasia Smith witnessed the sweet interaction and snapped a few photos, which she later posted on Facebook.

I didn’t like how it came to be, but was so happy that Ebony was helping her. This brightened my day.

“I wasn’t expecting it to go viral. Within two hours of posting the photo it had over 1,000 shares. I just wanted people to know what happened. It was nice to see someone helping Angela. She’s like everyone else,” Smith said.

Harris is more than happy to step in again whenever Peters needs her and has already painted her nails again.

Peters said she is grateful for Harris’ kindness. “I think Ebony is a very kind person. She did something out of the kindness of her heart,” she said.

Peters, who runs her own poetry website, says she harbors no negative feelings for the nail salon employees. But she does hope people learn from this story.

“I hope people learn that even though you’re disabled, you can still want to get your nails done and have your own business,” she said.

Walmart also had good things to say about Harris’s kindness.

RELATED: ‘You’re Enough’ – Dad With Cerebral Palsy Sobs When Son Reassures Him He Has Been Amazing

“Ebony simply wanted to make sure our customer’s day was special, and that’s the kind of person she is — someone with a wonderful attitude who goes the extra mile each day to make those around her feel important. We’re not surprised at her act of kindness. Her service to customers defines the spirit of Walmart, and we couldn’t be more proud,” the company said in a statement to ABC News.

Harris just hopes that her act of kindness catches on. “Random acts of kindness and good attitudes are important. Angela never showed any anger; she always had a smile on her face. I want everyone to see, despite anything that may make us different from each other, we are all people. You should always stop and talk to people or help people if you can,” Harris told TODAY.

We can all learn a lot from Peters who harbored no hard feelings when the salon refused her service and Harris who stepped up with kindness to make her feel good.

respect people
“Respect is appreciation of the separateness of the other person, of the ways in which he or she is unique.” – Annie Gottlieb
Tags
Share
← Prev Post Next Post →