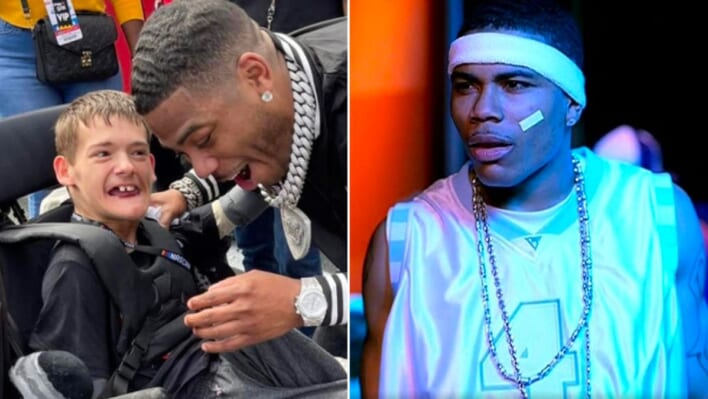 Nelly gifts the custom jacket to 23-year-old fan, Jacob Lemke, who was born with Lesch-Nyhan syndrome.
By Heidi Hamm    November 1, 2022

Nelly gifts the custom jacket to 23-year-old fan, Jacob Lemke, who was born with Lesch-Nyhan syndrome.

Nelly is no stranger to philanthropy. For years he has used his celebrity status for good, including quietly sending black kids to college for years and founding the non-profit organization 4Sho4Kids Foundation, which helps children born with developmental disabilities and children born addicted to drugs.

And now? He’s giving the jacket off his back. Literally.

The heartwarming gesture happened at NASCAR’s Bank Of America Roval 400 playoff cup race where the rapper took to the stage to kick off the event.

Who is the Disabled NASCAR Fan?

Nelly had just finished up his set and was in the midst of interviews and photo ops when Jacob Lemke caught his eye.

Lemke was born with the rare genetic disorder Nesch-Lyhan syndrome. NLS is caused by a deficiency of the enzyme, HPRT, which breaks down uric acid in the body.

The abnormally high levels of uric acid in the body result in severe arthritis (gout), poor muscle control, and mental disability. According to the National Institute of Neurological Disorders & Stroke, it also causes uncontrollable self-mutilating behaviors.

Lemke was attending the event with his mom and former teacher, Nate Salisbury. Salisbury and his mother surprised him with VIP tickets for his 23rd birthday.

Nelly’s Act of Kindness is Met With Cheers & Applause

As soon as Nelly spied Lemke, he immediately made his way over to him.

The sweet exchange was captured on video and Charlotte Motor Speedway shared it via Twitter. They captioned it: Moments like these, followed by a heart emoji.

The video has been viewed more than 100K times.

Taking off his custom-made Charlotte Motor Speedway jacket, Nelly can be heard saying: “I like your vest but I’m gonna give you this jacket. You hold it down, OK?”

Lemke’s excited response says it all. In response to his ecstatic reaction, the Grammy-winning artist said, “I know. I feel the same way! My guy, you hold onto this today.”

After learning it was also his birthday, Nelly wished Lemke a “Happy birthday, brother!” and gave him a hug. His parting words were “Next time, you’re driving!”

Lemke comes by his love of hip-hop and NASCAR honestly. His father shared his love for both with his son. Sadly, he passed away recently and wasn’t there to witness the special exchange.

The World Is Touched by Nelly’s Good Deed

Tweeters are praising Nelly for being the real “MVP.”

One person commented: “Omgsh that boy was so excited. Bravo to Nelly. Outstanding.”

Another appreciated him for taking the time to appreciate his fans, saying: “I’ve liked @Nelly_Mo since I saw him in the Longest Yard. He’s a race fan, has done collaborations in country music, but nothing tips this. Good on you Nelly. I appreciate you, appreciating the fans.”

“That is our guy from the STL. He has always treated me with kindness, met him 6 times. Great supporter of our city.”

“This is a huge win… we need more people like Nelly in this world.”

Nelly’s act of kindness took less than one minute. But for Lemke and his family, the joy-filled memory will last a lifetime. It just goes to prove, you don’t need to invest a ton of time into making someone’s day. Sometimes all it takes is a moment or two.