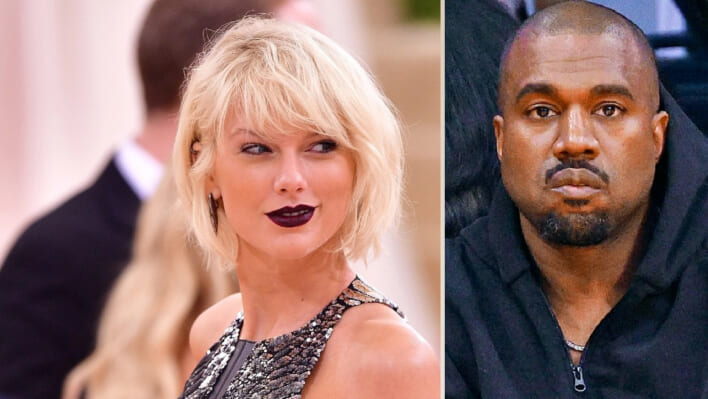 Taylor Swift proves a slow and steady approach wins in the end, even when you’re battling a billionaire.
By Steven John    October 26, 2022

Taylor Swift proves a slow and steady approach wins in the end, even when you’re battling a billionaire.

The bizarre story of the feud between Taylor Swift and Kanye West, a feud that for many years also involved West’s now ex-wife, Kim Kardashian, began in a moment seen by millions on live TV and replayed countless tens of millions of times in the years since. Surely you know the exact moment well, but just in case it’s not on your mind, or to get it there freshly, let’s do a quick revisit.

The date was Sunday, September 13th, 2009, the place was New York City’s Radio City Music Hall, and the event was the MTV Music Video Awards. As Taylor Swift, then just 19 years old, took the stage to accept an award for the Best Female Video of the year, Kanye West, then a 32-year-old man, rushed onto the stage and ripped the microphone from the teenager’s hand.

West then raised a middle finger to the audience and stormed off the stage, soon to be ejected from the awards ceremony, and leaving a befuddled Swift — and a befuddled audience and world at large — to wonder what had just happened.

And though few could have known it at that wild moment, one thing that had happened was the commencement of a bitter feud that would simmer, and at times flare, between West and Swift for years to come.

As noted, it all started on that fateful Sunday night in September of 2009, a night which Beyoncé apparently cried behind the stage, shaken by what West had done, while Pink is said to have told West off right to his face.

The day after the incident on stage, West said on The Tonight Show with Jay Leno that he had been wrong for what he did, and on Ellen he would later blame the outburst on emotions and alcohol — in other words, he was drunk and out of control, and it wasn’t his fault. Swift later revealed that in the first few days after the VMAs, West called her and offered a seemingly sincere apology, which she accepted.

If he apologized and meant it, and she accepted it, would not that be the end of the story? Yes, but the story doesn’t end there.

The next year, in 2010, Swift released a song called “Innocent” which was an ostensible sleight aimed at West. Among other lyrics, it contained the barbed and very specific line “32 and still growing up.” Remember West’s age at the time he ran onto that stage?

Then, in mid 2013, West went ahead and fully withdrew his apology, saying: “I don’t have one regret. If anyone’s reading this waiting for some type of full-on, flat apology for anything, they should just stop reading right now. I have, as a human being, fallen to peer pressure.” To be clear, he meant he had “fallen to peer pressure” to apologize for interrupting someone else’s moment and making it fully apparent he felt he was in the right.

Surprisingly, in 2015 there was a thaw and even a warming between the two. They were seen in close proximity at an awards show and West even teased at an upcoming collaboration, saying: “he wants to get in the studio, and we’re definitely going to go in. Any artist with an amazing point of view, perspective, fanbase, I’m down to get in the studio and work. I don’t discriminate.”

Swift quickly denied these plans, saying they had no collaboration planned, but expressed personal fondness for the man. And later that year, in a moment that would have been hard to believe six years earlier, Swift introduced West at the MTV Video Music Awards and even poked fun at his wild intrusion in 2009. Swift has gone on record with Billboard, saying she believed West was two-faced.

But in early 2016, things took a turn for the worse again. In his song “Famous” on the album The Life of Pablo, West included the lyrics: “I feel like me and Taylor might still have sex. Why? I made that bitch famous.” The entente was over.

A bit later in 2016, as she accepted a Grammy award, Swift spoke out, clearly referencing West when she said, in part: “…to all the young women out there, there are going to be people along the way who will try to undercut your success or take credit for your accomplishments or your fame. If you just focus on the work, and you don’t let those people sidetrack you.”

Taylor Swift and Her Feud with The Kardashians

Kim Kardashian, then still married to West, would later claim Swift knew of the lyrics all along and was faking being hurt by them, but Swift denied this while, admirably, supporting Kardashian, saying she knew the woman was under pressure, and not swiping at her or West.

There was much back-and-forth between the West and Swift camps for the rest of 2016, and in 2017 Swift released a song that seemed to again swipe at West, “This Is Why We Can’t Have Nice Things.”

Despite that, from 2018 through 2019, things calmed down again, but then, even as West’s life began to fall apart, the confusion over whether or not Swift knew of the lines in “Famous” resurfaced and set But now, a couple more years on, it seems the feud is over, and not because the two are chummy again, but because West is heading down and out and Swift is riding high.

A look at Swift’s Song “Karma”

Is Taylor Swift’s song “Karma” really about Kanye West? The singer hasn’t said so and is playing her cards close to her chest. She has yet to talk about the theories on her song but on close inspection of the lyrics, a guess, yes, seems a safe one. Consider the opening lines:

“You’re talking s–t for the hell of it
Addicted to betrayal, but you’re relevant
You’re terrified to look down
‘Cause if you dare, you’ll see the glare
Of everyone you burned just to get there
It’s coming back around

And I keep my side of the street clean

You wouldn’t know what I mean”

Does that unnamed “you” sound like anyone we know? Maybe someone who was recently excoriated for antisemitic remarks? Or someone who couldn’t well keep quiet while his family was being dragged through a horrid divorce? Someone who has now lost major partnerships with brands like Adidas and who is being routinely lambasted in the media and mocked on social media? Someone, in other words, like Kanye West?

RELATED: Taylor Swift Discovers Pregnant Fan Is Homeless And Shocks Her By Buying Her A Home

And then let’s take a look at Taylor Swift’s reputation right now — and yes, that should call to mind her 2017 album named Reputation that topped charts and sold more than a million copies in its first week of release. Swift is generally considered to be smart and savvy, polite and caring, strong but kind, and very much in control of her career and her image.

In other words, she is almost the polar opposite of Kanye West, who is wild, unbalanced, and controversial and who very likely does, as Swift sings in “Karma,” feel frightened to have that proverbial look in the mirror given how many people he has wronged — or “burned” as she puts it — along the way.

Over the years, even as Kanye West has grown ever more publicly unhinged and erratic and has fallen farther and farther from favor with fans and his own family, Taylor Swift’s proverbial star has only risen. Granted, at last check West’s colossal wealth of around $2 billion far outstrips Swift’s estimated $450 million, but this only proves that money is a poor measure of character — and besides, Swift is wildly wealthy anyway, and is more than 12 years his junior at that.

The most impressive thing is that, despite the fact that she could take jabs at West whenever she wants and in ways that would be seen around the world — Swift has nearly a quarter of a billion followers on her @taylorswift Instagram alone, for example — she has rarely taken a swipe at him. It’s as if she cannot be bothered by the pettiness of it all.

Swift was deeply rattled by that moment at the MTV Music Video Awards as she has admitted in interviews many times. Surely she as dealt with much anger and anxiety and frustration caused by West over the years, and admirably she has, for the most part, done just that: she has dealt with it.

There is a certain graciousness in allowing the hate and turmoil to run off your back that many find difficult. It’s never easy to turn away from the drama but instead lean into what you know you can control, love, and ultimately succeed at.

If “Karma” and other Swift songs are about West, perhaps she’s been doing a bit more than keeping her chin up and living her best life. Perhaps this lyrical wordsmith has taken a note from the finest wordsmith of them all, William Shakespeare, who wrote: “If you wrong us, shall we not revenge?” Indeed West wronged Swift, but she has won the day.