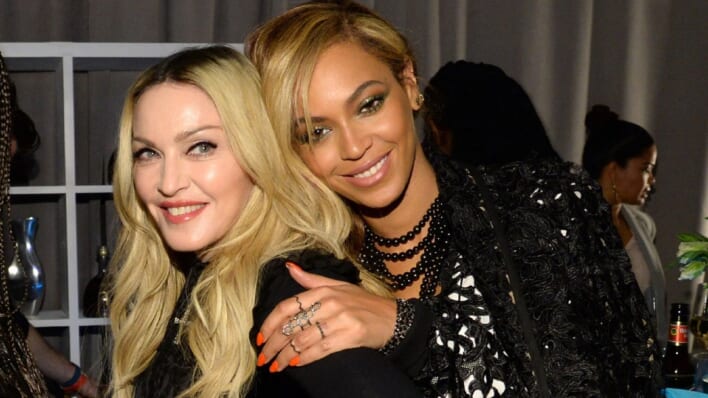 What happens when the Queen B and the Queen of Pop team up? Iconic music and one very large bouquet of roses. Beyoncé’s appreciation for Madonna is a powerful lesson about positive collaboration.
By Amy Lamare    August 31, 2022

What happens when the Queen B and the Queen of Pop team up? Iconic music and one very large bouquet of roses. Beyoncé’s appreciation for Madonna is a powerful lesson about positive collaboration.

In a world that often pits women against each other, the Beyoncé and Madonna collab and the friendship between the women that was born out of it gives us all the feels. Beyoncé released several remixes of “Break My Soul,” the first single off her new album Renaissance. One of the remixes, called “Queens Remix” heavily samples Madonna’s 1990 hit “Vogue.” During the spoken word portion of the song in which Madonna calls out celebrities including Marilyn Monroe and Marlene Dietrich, Beyoncé changes it to Black female artists including her sister Solange, Grace Jones, Lizzo, and Whitney Houston and sings alongside Madonna’s version.

RELATED: Beyoncé’s Removes a Toxic Slur From “Heated” and Helps Change the World’s View of a Word

The original cut of “Break My Soul” has rocketed to the top of the Billboard charts, giving Beyonce her first solo number one hit in the United States since “Single Ladies” in 2008.

Beyonce showed Madonna appreciation for allowing her to sample “Vogue” and Madonna was thrilled at the gesture. Is a new friendship between the two singers blooming?

Beyoncé was so thankful to Madonna for letting her sample “Vogue,” that she sent the Queen of Pop a huge bouquet of white roses, tulips, and orchids along with a note that said,

“Thank you, Queen. I am so grateful for you. You have opened so many doors for so many women. You are a masterpiece genius. Thank you for allowing me to sing in your song and thank you for naming the remix. Love always and forever, B.”

RELATED: How Beyoncé And Jay-z Saved Their Marriage

Madonna shared a photo of the bouquet and note to her Instagram account with a note containing two heart emojis that said “thank you!!! From one [crown emoji] to another [crown emoji].”

For the record, Beyoncé didn’t pull the phrase “masterpiece genius” out of thin air. It’s a lyric in the song “Alien Superstar” on her recently released album Renaissance.

Who Does Beyoncé Pay Tribute to in the “Queen’s Remix” of “Break My Soul?”

Madonna’s “Vogue” was influential in 1990 as it was one of the first mainstream songs to celebrate the Black and Latinx LGBTQA+ ballroom culture of New York City and the voguing that rose to popularity from that subculture.

Obviously, Beyoncé and Madonna are majorly successful superstars but there’s still a lesson in their collaboration and in how Beyoncé thanked, acknowledged, and appreciated Madonna’s efforts. The flowers and lovely note Beyoncé sent Madonna can also be viewed as the younger generation showing appreciation for her elder who blazed trails in the music business that weren’t immediately available to female artists before Madonna broke those barriers.

Is there a relationship in your life that could use this kind of acknowledgement and appreciation? Perhaps a friend who would love to receive a card or note in the mail or someone who you haven’t talked to in a while whose spirits would be lifted and who would feel appreciated by hearing how much they mean to you.

Women working together is especially important and powerful. After all, women have been fighting against boys’ clubs pretty much since time began. Forbes reported on the “Power of the Pack” and how that mentality can be especially helpful for women, specifically, “There’s power in. the pack” and “you realize your strengths make the table better.” Beyoncé realized that adding Madonna to her “Break My Soul” remix would make it better and also make it a showcase for two powerful female voices.

The Harvard Business Review also found that women who collaborate with each other have a greater chance at succeeding within their industries due in large part to that fact that traditionally women have faced issues, like unconscious bias, that have prevented them from advancing at the same rate as men do. Sharing your experience with other women helps break the proverbial glass ceiling.

Beyoncé’s “Queens Remix” of “Break My Soul” celebrates the unique and essential contributions Black women (and Madonna) have contributed to the music industry. It is a powerful and inspiring work of art.