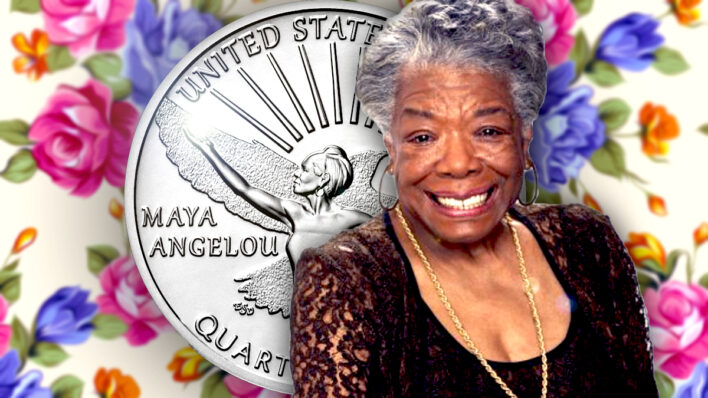 One of the most iconic American authors of the 20th Century, Maya Angelou’s motivational life, presence and soul are celebrated on the year that would have been her 94th birthday with an historic first.
By Amber Dowling    April 4, 2022

One of the most iconic American authors of the 20th Century, Maya Angelou’s motivational life, presence and soul are celebrated on the year that would have been her 94th birthday with an historic first.

Maya Angelou was a notable figure for many reasons. The author, poet, and civil rights activist published seven autobiographies, three books of essays, and even more books of poetry over her career. Then there’s the fact that she’s received more than 50 honorary degrees over her life, which spanned from 1928 to 2014.

Add to that the overall inspiration and motivation she gave to countless others throughout her life, and it’s about time someone celebrated this woman with her image on a coin.

How Maya Angelou’s Spirit Is Celebrated on Her New Coin

The United States Mint certainly thinks so. Earlier this year, it announced it had begun shipping quarters featuring Angelou’s image as one of the first coins in its American Women Quarters Program. That makes her the first Black woman to appear on a quarter in U.S. history.

“This coin will ensure generations of Americans learn about Maya Angelou’s books and poetry that spoke to the lived experience of Black women,” senator Catherine Cortez Masto, who sponsored legislation to make these quarters happen, said in a statement as per The Washington Post.

Each time we redesign our currency, we have the chance to say something about our country.

“Each time we redesign our currency, we have the chance to say something about our country,” added Treasury Secretary Janet Yellen, America’s inaugural female treasury secretary. “I’m very proud these coins celebrate the contributions of some of America’s most remarkable women, including Maya Angelou.”

According to The Post, the mint will issue 20 total quarters during the next four years honouring other successful women and their own achievements in helping to shape American history.

The quarter featuring Angelou features her image in a side profile with outstretched arms. Behind her are notable images inspired by her poetry: a bird in flight (a purple martin to be exact, which is native to Arkansas, where Angelou grew up) and a rising sun.

A lot of her work is geared toward uplifting people. And so I wanted to show her in an uplifting gesture.

“It struck me that she lived life very passionately,” coin designer Emily Damstra previously told CNBC Make It. “A lot of her work is geared toward uplifting people. And so I wanted to show her in an uplifting gesture.”

Even Oprah Winfrey was moved by the design. “What a beautiful thing,” she said in an Instagram video, holding the coin. “This marks the first time a Black woman has appeared on one,” she added in her caption. “What a beautiful moment. Maya, look at what you did!”

April 4 marks the day that Angelou would have turned 94-years-old had she not passed away in 2014. Angelou was celebrated throughout her life, not just as a writer, but as a a confidante to civil rights leaders; she was friends with notable figures including Malcolm X and Martin Luther King Jr.

While Angelou’s works span pages and years, it was the 1969 publication of I Know Why the Caged Bird Sings that resonated with so many people, including U.S. President Barack Obama, who awarded Angelou the Presidential Medal of Freedom in 2010. The book was also one of the first written by a Black woman to receive such widespread readership.

You shouldn’t go through life with a catcher’s mitt on both hands; you need to be able to throw something back.

If you want to celebrate Angelou’s birthday, one of the easiest ways to do that is to pick up that book and give it a read (or a re-read). You never know what inspiring kindness quotes you may come across that can help guide you in your own time of need.

Or why not celebrate by donating time or money to a charity that honours the work Angelou did throughout her life? There are plenty of organizations in Canada that empower Black communities and could always use help.

After all, to quote the words of the great Maya Angelou herself, “You shouldn’t go through life with a catcher’s mitt on both hands; you need to be able to throw something back.”