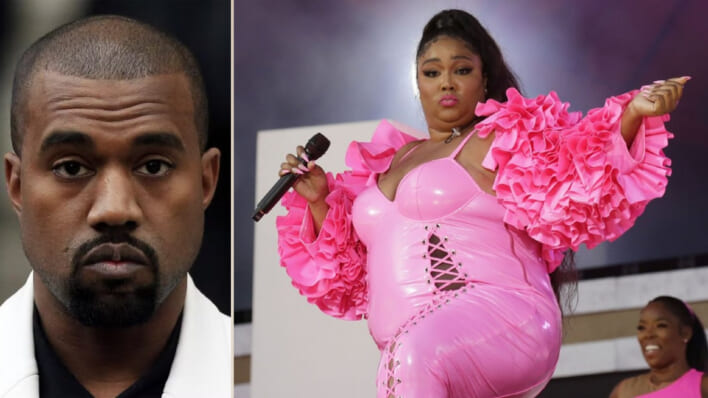 Lizzo again proves that embracing yourself is not only about exuding boldness. What actually makes you a winner is loving yourself enough to know that haters daring to target your confidence don’t deserve a reaction.
By Apeksha Bagchi    October 15, 2022

Lizzo again proves that embracing yourself is not only about exuding boldness. What actually makes you a winner is loving yourself enough to know that haters daring to target your confidence don’t deserve a reaction.

What are the requirements to be a pop star? A good, strong, and alluring voice? Having a unique style? Knowing how to flex your creative prowess? Lizzo has them all, with confidence, even when someone like Kanye West comes after her.

Unfortunately, even though we are living in the 21st century and presumably left the archaic mentalities behind, there are a few who find satisfaction in judging someone based on whether or not they meet the criteria of the “ideal” body type.

RELATED: Woman Ruthlessly Bullied By Dance Teachers For Being Overweight Breaks Stereotypes And Gets The Last Laugh

As if the task of churning out good work isn’t enough, pop stars have to pay heed to the demoralizing comments of trolls who evaluate talent on the basis of how someone looks. There is this added pressure of fitting everyone’s definition of beauty and perfection. Such negative and crude comments often succeed in crippling the willpower of the most confident out there.

But not Lizzo. The singer-rapper has been the subject of demeaning comments and unwanted suggestions aimed at her for a long time and yet, she has never, not even once, opted to sink to the level of her naysayers. But that so does not mean she has been simply taking in all the hate lying down.

The Latest String of Body-Shaming Comments Against Lizzo

Just a few days, rapper Kanye West, or Ye, who has been embroiled in controversies these past few weeks, decided to target body positivity movements in a chat with Fox news, claiming they are a sham. He started by levelling his comments at Lizzo, who has been a vocal supporter of body positivity and has boldly ditched the notion of fitting into everyone’s opinion of what is perfect.

“When Lizzo loses 10 pounds and announces it, the bots … on Instagram, they attack her losing weight,” Ye said, “because the media wants to put out a perception that being overweight is the new goal when it’s actually unhealthy. It’s demonic.”

Lizzo could have reacted with vitriol and fired back demeaning comments of her own in retaliation because Kanye deserved it for starting the whole drama with his unwanted opinions. But Lizzo did what Lizzo does best — make the trolls realize that their bitter words, meant to hurt her, have no effect whatsoever on the fact that she is acing life.

Recently, during her tour in Toronto, Lizzo, without even taking any names, addressed how she feels like “everybody in America” is talking about her without any logical reason. In a video shared by TMZ, she is seen interacting with her countless fans sitting in the audience and wondering why everyone is spewing their two cents about her while she is busy “minding my fat Black beautiful business.”

RELATED: Demi Lovato Has Moved Beyond Body Positivity– and You Should Too

Well, that is Lizzo for you, people — elegant, oh, so confident, and letting haters drown in their disappointment of failing to rile her up with their spiteful words. And this is not the first time when the “Good as Hell” singer chose to bask in her success and confidence instead of striving to get back at those who find solace in trying to bring down others.

A few weeks before the Kanye West incident comedian Aries Spears directed body-shaming remarks at Lizzo in an interview with The Art of Dialogue. Spears was asked about Lizzo’s music but the comedian made it clear that he can’t “get past the fact that she looks like the s— emoji.”

“She’s got a very pretty face, but she keeps showing her body off. Like, come on, you?” he added.

According to Spears, even though he’s not “the most in shape,” he is handsome as well as “funny, has swagger and confidence, and is at least decent looking” which is what he needs to attract women. But he believes that “a woman that’s built like a plate of mashed potatoes is in trouble.”

His comments about Lizzo were undoubtedly degrading and shared with the intention to insult the “About Damn Time” singer. Yet, Lizzo once again chose the higher road, proving that she is in a high place, not just career-wise but also mentally and emotionally. She simply called out everyone (read: Spears) who is busy criticizing her during MTV Video Music Awards.

It’s not that Lizzo isn’t bugged or affected by what the world is saying about her. At the end of the day, she is a human with emotions and thoughts that are influenced by the positivity and negativity around her. She has admitted on many occasions how the racist and fat-phobic comments spoken carelessly by others, maybe to get more clicks or spark a controversy, affect her as there is no escaping them.

She recently shared how an online comment last year attacking her appearance and weight really hurt her. But then she decided that instead of being the victim, she will show how to thrive in such a demoralizing atmosphere and still win. She chose to be an example for anyone and everyone experiencing the same and let them find solace in the fact that if she can get through this never-ending swamp of negativity, so can they.

In an interview with Zane Lowe on Apple Music 1, Lizzo acknowledged that she is aware that her narrow-minded haters treat her as “some sort of punchline” as they simply can’t accept the attributes that define her. Just because she dares to be who she is and declines to stick to others’ definition of what she should be, she has always found herself facing criticism and flak as she sticks to “the way I choose to exist.”

As she knows such people employ “negativity as clout and attention” to make themselves feel good, she keeps her distance from giving them the slightest attention. She even avoids reading about what they are saying or writing about her.

LIzzo Does the Best Clapback and Says Nothing At All

As Lizzo once said, by embracing and believing in herself, she is creating her own beauty standard i.e., be who you are without fretting what others think you should be. And she is confident it will be the only standard one day.

RELATED: The Shocking Truth About Lizzo’s Weight (And Why We Have It All Wrong)

The “Good as Hell” singer knows her own worth and that there is no reason to roll around in the muck with trolls, not expending the energy it takes for response or hate lets her live her own life is a great lesson in realizing that not responding can be the greatest revenge. Lizzo is the living embodiment of the saying that the best revenge isn’t reacting, it is living life like a winner, loving yourself, and letting the critics stew in their self-created hatred.