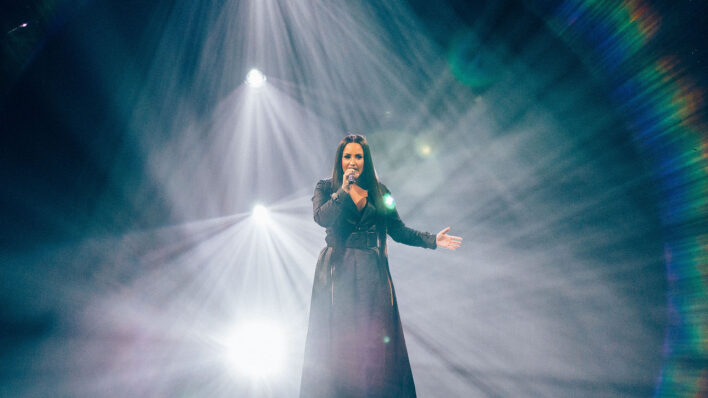 BIRMINGHAM, ENGLAND - JUNE 29: Demi Lovato performs on stage during her Tell Me That You Love Me tour at Arena Birmingham on June 29, 2018 in Birmingham, England. (Photo by Joseph Okpako/WireImage)

Demi Lovato Has Moved Beyond Body Positivity– and You Should Too

During her first interview since her relapse, Demi Lovato opened up about strength, body acceptance and new projects for her fans that are yet to come.
By Flavia Medrut    November 25, 2019

During her first interview since her relapse, Demi Lovato opened up about strength, body acceptance and new projects for her fans that are yet to come.

It’s been a little over a year since Demi Lovato’s apparent overdose. She’s been through a lot this whole time, but now she’s back feeling stronger than ever.

During her first interview with Teen Vogue since her relapse, Demi opened up about inner strength, body acceptance, and new projects for her fans yet to come.

More cautious about her decisions and equipped with a lot more patience this time around, Demi now takes a different approach regarding her self-image and actions.

I think it’s been a very introspective year for me. I’ve learned a lot, been through a lot.

This is not the first time Demi publicly speaks about body image. Over the course of her career she’s been struggling a lot with meeting beauty standards.

We’re dealing with an industry of beauty and perfection, where appearance seems to count more than talent itself. The media is presenting us some impossible goals to reach in order to feel good about our bodies.

Every time we open a fashion magazine or our social media accounts, we see the same things – more diets, new aesthetic surgeries, trends that are hard to keep up with, and women who would sacrifice anything to get one step closer to perfection.

By being part of this industry since childhood, Demi felt she had no choice but to follow all the ridiculous rules to meet the beauty standards set by society. But when she finally got the body and looks she “needed,” instead of feeling more confident, she was feeling rather distressed and frustrated.

Over the past five years I’ve learned life is not worth living unless you’re living for yourself. If you’re trying to be someone you’re not, or you’re trying to please other people, it’s not going to work out in the long run.

So she began taking small steps in focusing on her own needs first and accepting her true self.

Demi’s self-image has changed a lot over this past year. Where she once struggled with an eating disorder and took dieting and exercise to an unhealthy extreme, today she is capable of accepting her body as it naturally is.

We hear the term body positivity all the time. To be honest, I don’t always feel positive about my body. Sometimes I do not like what I see. I don’t sit there and dwell on it. I also don’t lie to myself.

Her statement makes the difference between body positivity and body acceptance quite clear. We can all sit in front of a mirror and tell ourselves how beautiful we are, but it won’t have any positive effect if we don’t truly believe what we say.

We all have our bad days. Today your skin might glow, but the next day it might look awful – and that’s perfectly normal. You’re only confident about your self-image once you accept that and move on without changing anything.

Demi allows herself a cheat day every now and then, doesn’t force herself anymore to hit the gym like a maniac, and says she’s feeling better than ever. She still has a trainer and a nutritionist, of course, but she’s doing things at a pace that makes her feel comfortable.

She doesn’t hide her flaws

While many other stars are still trying to impress strangers on social media with unrealistic photos, Demi has embraced the fact that she is only human and accept that having flaws is part of that. She recently posted a photo of herself in a bikini, explaining that she had retouched photos of herself in the past to make herself look smoother and thinner.

Even though Demi was scared about the mean comments she would get, she still followed her heart and posted the photo.

Aside from the fact that there will always be trolls and haters online, the singer encouraged fans to remember that words can still hurt.

What people don’t realize is I’m an extremely sensitive person. When someone says something mean about me or makes a meme making fun of me, I have a good sense of humor. But when it’s a very serious subject it can be hurtful.

How self-acceptance empowers us

By being true to herself, Demi says that accepting her body also helped her determine exactly what she wants from life. She realizes that past events might have overshadowed her career as a musician, but she’s working hard to get people to remember that she’s a singer and an actress, first and foremost.

Demi is happy to announce a new album that will tell her story exactly as it is, and the charts are waiting for her. Her fans continue to support her and she couldn’t be more grateful about it.

What I see in the mirror [is] someone that’s overcome a lot. I’ve been through a lot and I genuinely see a fighter. I don’t see a championship winner, but I see a fighter and someone who is going to continue to fight no matter what is thrown their way.

The singer teaches us a lot about dealing with our self-image in a healthy way. Allow yourself to take a break and see yourself for who you really are. Learn to love that– not an ideal that you’ve created inside your mind. Confidence lies in the acceptance of your true self.