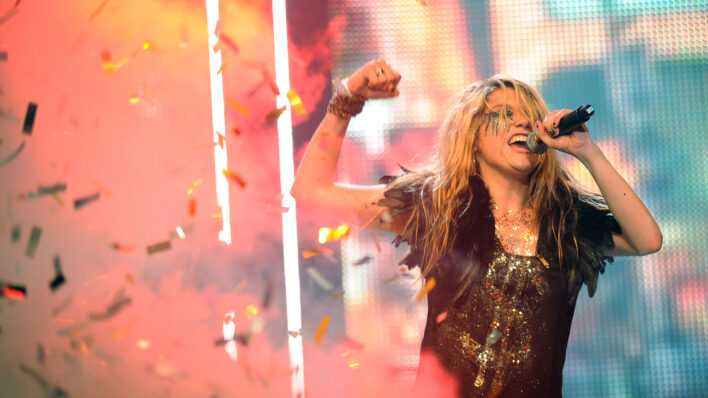 Unappreciated for her musical talent, Kesha was the queen of trash pop until she disappeared suddenly from the limelight to fight a life or death battle.
By Aly Walansky    August 14, 2019

Unappreciated for her musical talent, Kesha was the queen of trash pop until she disappeared suddenly from the limelight to fight a life or death battle.

Madonna, Lady Gaga, Ke$ha. These are just a few powerhouse, brilliant, women, forces to be reckoned with, who have often been misunderstood, their bold, platform changing ways being relegated to the status of “bad girl” or “troublemaker.”

It might seem easy to dismiss Ke$ha as a party girl known for such raunchy songs as “Tik Tok”, “Blow”, and “Your Love is My Drug” off her multi-platinum debut album Animal.

But in the decade since she brushed her “teeth with a bottle of Jack,” Ke$ha has gone through a harrowing personal and creative journey that led her through serious darkness — and she shed the signature dollar sign in her stage name in the process.

Who was Kesha before the $ ?

Kesha got her start in the industry pretty young, and quickly found herself embroiled in a hard-fought struggle for creative freedom.

Growing up with a single mother who dreamed of a musical career of her own, Kesha often attended her mom’s performances even as a baby. Her family struggled to make ends meet, even relying on food stamps to put food on the table.

In school, she was a band geek who excelled on her SATs and had the opportunity to attend elite colleges, but all she really wanted was to make meaningful music. It seemed she had gotten her wish: Kesha signed her first record deal at 18.

The producer who initially supported Kesha’s rise to fame was Lukasz “Dr. Luke” Gottwald, who heard her demo and executive produced her first two hit albums, Animal and Warrior. The working relationship between talented teenager and label head seemed fruitful from the outside but as it soured, Kesha suddenly disappeared from the public eye in 2012.

What happened to Kesha? Why didn’t we hear from her until her return to the music industry in 2017?

We all know Ke$ha the party girl

This wild persona was certainly beneficial when it came to marketing and selling Kesha’s music. Her debut album featured songs she had begun writing when she was still in high school — when the most rebellious thing you could do was party and mess around with guys.

Yes, Kesha defies convention every chance she gets, but what that looks like for a teenage girl and a grown woman are two very different things.

She wasn’t just trying to avoid being viewed as a “typical” acceptable girl. She was trying to show the world that such a girl doesn’t, and shouldn’t, exist.

As Kesha put it, “I didn’t want to be just pretty — I was wild, crazy, and free. I talked about sex, drugs, and drinking. When men do that, it’s rock and roll but when I did it, people assumed I was a trainwreck.”

While her songs are sometimes about partying, they are also often about feminism, existentialism, grief, individuality, and even death. These are decidedly adult topics, but not all of them are fun or “wild.” Some are quite artistically serious and important conversation points.

Society often pretends it’s very open minded and accepting, but the reality is, that’s only if you fit into the box they have created for you. Kesha’s box was a shallow, wild, party girl and she was ready to bust out of it.

Kesha is often misunderstood because she’s defied all boxes

A party girl who aced her SATs. A soulful singer and songwriter who released a song called “Blah Blah Blah”. A survivor of abuse and mental health struggles who is being sued by the man who helped launch her career.

Kesha’s working relationship with Dr Luke had fallen apart starting with the recording of her second album, Warrior. Two years after its release, she sued to be released from his label, alleging physical, sexual, and emotional abuse. His response was that she was known to be an untrustworthy person, and was making up excuses to get contractual leverage.

Even with her successful struggles for creativity and music that mattered, she suffered, and conquered a lot of personal demons. She also suffered an eating disorder due to the pressure of staying thin. “I convinced myself that being sick, being skinny, was part of my job,” she explained in an op-ed for Elle UK.

In fact, Kesha spent 60 days in rehab for an eating disorder: “I tried to [starve myself] and almost killed myself in the process.”

Her therapist at the rehab clinic recorded that, during treatment, she presented with “many features of a battered woman.”

In the end, Kesha did not win her case against Dr. Luke, but in a video message to fans, Kesha thanked them for getting her through the darkest time of her life.

After the rain comes the…

After years of silence, Kesha emerged triumphant in 2017 with the release of Rainbow, her first album without Dr. Luke’s creative input. It debuted at number one and even earned the artist her first Grammy nomination.

She’s received vocal support from icons such as Lady Gaga, Adele, Taylor Swift, and Ariana Grande, and even released a documentary about her struggle for recovery.

Kesha’s music and image were about feminism long before this battle “Tik Tok” was the worldwide best-selling single of 2010, but it led to her being written about as a silly, clownish slut, but she did it because she “wanted to talk about men the way men talk about women,” she said.

There are a lot of female artists now, fighting a battle for truth and authenticity in their voice and their music, but when Kesha started out, it wasn’t so much like that. That led to a lot of strong and smart female voices being subdued or silenced.

It’s an evolution she’s worked for years to undertake while she recalls her own team – as well as the media – attempting to suppress her growth.

As far back as her first album she showed strong songwriting skills, even stronger vocals, and an important message she was trying to get out. She had a story to be told, and people couldn’t find her artistry and brilliance beneath the fun party girl image that had been built.

There’s a darkness and a passion to Kesha that so many people can’t really understand, but that’s part of what makes her music so brilliant and so important.

She wants us to understand, and learn from it. She forces us to take a new perspective by being fiercely herself — and therein lies her genius. It’s a part of her that we all could learn so much from — about her, and about the world, and ourselves. All we need to do is take the time to stop judging and really listen.