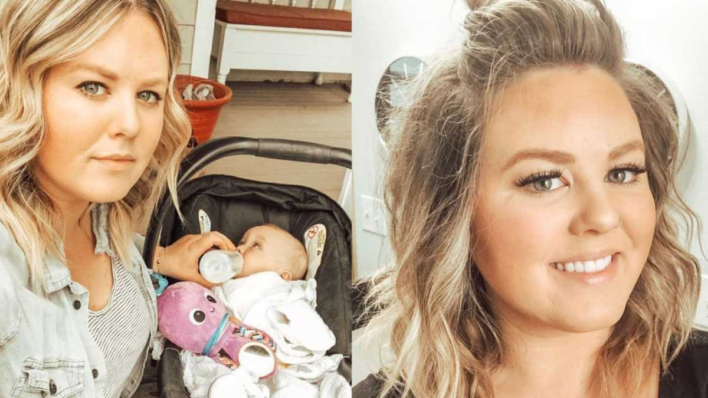 ’Honey, You Should Wait Until You Lose The Baby Weight’ – Store Employee Shames Mom And Regrets It

This story originally appeared on Love What Matters. You know what they say about assumptions — they make an ass out of
By Joel Balsam    September 9, 2021

This story originally appeared on Love What Matters.

You know what they say about assumptions — they make an ass out of ‘u’ and me. That saying is particularly prescient in this story about a woman who was offended by a jewelry store employee who opened her mouth without any semblance of tact.

In a personal essay submitted to LoveWhatMatters, Lacey Giebel of Washington said she struggled with societal pressures that lead to unhealthy eating habits for her entire life.

“For years I used to starve myself to fit into the Abercrombie clothing, smaller sizes. I thought if I had one roll on my stomach boys wouldn’t find me attractive. I would cry in my room and do sit ups before bed to make sure I wouldn’t get bigger,” she wrote. “I have always been self-conscious of my stomach. Once someone told me not to wear a white T-shirt because it was unflattering on my stomach. I literally haven’t worn one ever since.”

But as an adult, Giebel decided to take on more positive self-talk, deciding “to love myself, to eat healthy, realize the scale is just a number, to be active, and not be obsessed with my weight.”

After meeting a man and getting married, Giebel decided to adopt a baby boy,

“My husband and I decided to adopt last year, which has been a beautiful journey becoming a family of three, but it is also extremely hard and stressful.”

She resorted to stress eating after adopting a baby boy

Giebel revealed that the stress of adoption led her to resort back to unhealthy eating behaviors.

“I am one that stress eats to the max! I ended up gaining 15 pounds in 4 months. I did my best to just enjoy every moment as a new mama to my baby boy. And focus on that,” she wrote.

As she focused on her baby rather than her eating, Giebel started to put on even more weight.

“The weight gain started to eat at me (pun intended). I saw other new moms that had birthed their babies that were already smaller than me, with flatter stomachs, fitting into their tiny jeans. And here I was bigger than my usual, uncomfortable, and embarrassed that I was big, and I didn’t birth my child.”

But one day when her son was six months old, she was feeling great.

“I had been feeling down about my appearance, but I lost some of the weight and felt confident this day,” she wrote.

Giebel decided to take her son out for a trip to the jewelry store, so she could get her wedding ring inspected and cleaned. But even as she felt confident, a random comment by the jewelry store employee almost brought her tears.

“The women went goo goo over Banning (I mean, who wouldn’t?) and then I asked about getting my ring soldered together since I hadn’t gotten to it yet. The lady looked at me and made a scrunched-up face,” Giebel wrote. “‘OH HONEY, YOU SHOULD REALLY WAIT UNTIL YOU LOSE SOME OF THE BABY WEIGHT.’”

“My eyes instantly started to water. I was speechless. There were other customers around who heard. It took everything within me not to cry,” she wrote. “I didn’t even want to stand there to tell her he was adopted. This was just my body, I didn’t birth him.”

She wants moms to lift each other up

Giebel didn’t pen this letter to get sympathy for how she looks.

“I’m not saying this for people to comment that I’m pretty, and not fat, and feel bad for me,” she explained. “I’m writing this honestly to remind people to be KIND. You don’t know what people are going through. You may see a woman with greasy hair and think, ‘Ew gross, shower!,’ but maybe she can’t because her baby is fussy and up all night and she hasn’t had 10 minutes. Maybe you see a mom with bad acne but maybe she’s breaking out because her baby likes touching her face while she gives them a bottle/nurses.”

In a world full of mom shaming, be a mom that lifts up other moms.

Words can hurt, so be kind

In fairness to the jewelry store employee, she probably wasn’t trying to make Giebel cry. She saw the woman and a baby and years of experience led her to conclude that the customer might not want the ring adjusted if they expect to lose weight in the near future.

The problem is how the woman said it. She could have used more tact, by making her suggestion much more gently. Or, she could have simply kept her mouth shut, letting the customer decide what they’d like to do.

Either way, Giebel’s lesson from the situation is correct. We must lift each other up, not tear each other down — we do a good enough job of that in our own heads.