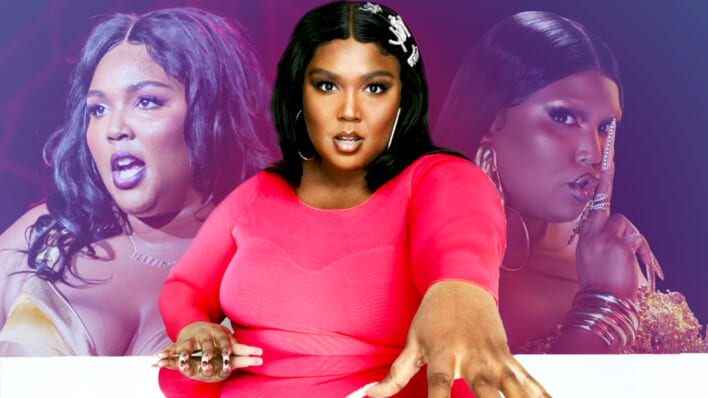 Lizzo’s willingness to listen and learn proves she’s a cut above the rest.
By Maya Khamala    June 22, 2022

Lizzo’s willingness to listen and learn proves she’s a cut above the rest.

In mid-2022, singer-songwriter-rapper and body positivity icon Lizzo did something altogether rare for a celebrity — hell, it was rare for human beings in general.

After her new single “GRRRLS” sparked heated discussions about ableist language, the “Truth Hurts” singer apologized for using the word “spaz.” But this is where she swerved from the usual response: instead of standing by her comments, she apologized, and decided to re-record it with the offensive word removed.

Lizzo, 34, who lived out of her car for a year as she tried to break into the music industry, has an all-too-acute awareness of the barriers faced by society’s less privileged. She also has a strong LGBTQ+ following and considers herself a hetero-leaning ally. On top of all this, she has been subject to fat shaming throughout her career and is a vocal advocate of body empowerment.

When you put all of this together, Lizzo is an undeniable champion of inclusivity. But that doesn’t mean she can’t make mistakes — and learn from them. In fact, the entire situation serves as an important reminder to everyone to avoid using offensive terms, no matter how normalized they’ve become.

Why Lizzo’s Lyric Was Deemed Ableist

For context, in the original opening of “GRRRLS,” Lizzo sings, “Hold my bag, b@#$%/ Hold my bag/ Do you see this sh*t? I’ma spazz.” The reworked track now includes the words “hold me back” in place of “I’ma spazz.”

The song, set to appear on Lizzo’s upcoming album Special, was met with major excitement from fans upon its release. But others, specifically people within the disability community, took issue with her use of what they felt was an ableist slur.

“I’m disappointed in @lizzo for using the word ‘sp@z’ in her new song ‘Grrrls,’” wrote one Twitter user. “There’s no excuse for using an ableist insult in a song in 2022. As someone who champions women, plus size people and others whom society treats poorly, Lizzo preaches inclusivity and should do better.”

Criticism of the use of “spaz” has long been prevalent, even if some observers may not understand why. In many cases, people who don’t understand the weight and history of the term use it to imply klutziness, and don’t know its derogatory nature.

“Spaz,” however, is derived from “spastic paralysis,” AKA cerebral palsy. It comes from the term “spastic,” which was once used to describe people with the condition. It’s often used as an insult to describe people with disabilities. “Spaz” or “spaz out” is also used to refer to someone losing physical or emotional control. According to Webster’s New World College Dictionary, it also describes someone who is “clumsy, awkward, stupid, odd, etc,” drawing closer the offensive nature of the term.

Drawing similar light to the use of seemingly innocuous but sometimes offensive speech, MSNBC Opinion Columnist Eric Garcia — who has a disability — asks that we consider “how many people describe student debt as ‘crippling’ or say that some piece of advice ‘falls on deaf ears.’” There are countless phrases that turn disability into a negative trait, perpetuating the idea that it is equal to deficiency.

The Controversy Over Lizzo’s Language Had Many Sides

Some people have justified Lizzo’s use of the word, arguing that it isn’t considered offensive in African American Vernacular English (AAVE).

Black disabled activist Vilissa Thompson, LMSW, couldn’t help but notice that online discussions were being dominated by disabled white people. She felt that many of these discussions was perpetuating anti-Blackness, and has pointed out how white musicians who use ableist language may receive some backlash, but it’s nothing like the intense visceral reaction directed at high profile Black people.

While she certainly makes some important points (one need look no further than the Will Smith fiasco to unearth evidence of a parallel discussion), Thompson stoked controversy when she went on to point out that, “language evolves,” and that “if the history of the word is offensive or has been used to oppress a particular group, it’s on each person to unlearn it.”

Lizzo’s Response Is Empathy in Action

The intricate intersections of race and language aside, Lizzo’s response to the criticism clearly did not come from a wounded ego.

“As a fat black woman in America,” she posted on Instagram, “I’ve had many hurtful words used against me so I overstand the power words can have (whether intentionally or in my case, unintentionally). I’m proud to say there’s a new version of GRRRLS with a lyric change. This is the result of me listening and taking action. As an influential artist I’m dedicated to being part of the change I’ve been waiting to see in the world.”

RELATED: Victoria Beckham Divorced Herself from a Dangerous Part of Her Personal Brand – Here’s Why

Rather than railing against cancel culture and “wokeness,” Lizzo demonstrated a willingness to listen, learn, and revise.

Not long after her post and her re-release of “GRRRLS,” people from disability communities expressed their appreciation of Lizzo for being responsive, receptive and empathetic. Fans and activists are celebrating the fact that she took their feedback to heart, and feel grateful to being heard.

“I’m going to cry  Thank you so much for hearing us Lizzo and for understanding that this was only ever meant gently and being open to learning, it honestly means the world. You’re a real true ally,” tweeted one fan.

Lizzo’s Response Can Teach Us All A Thing… Or Ten

Fact: it’s a lot more challenging to examine our own use of language than it is to criticize a celebrity online; and yet, this is precisely the kind of self-work that has the potential to make the world a better, more inclusive place.

Language as we know it is so rooted in derogatory meaning (human history might offer a clue as to why), that even the most aware among us can find ourselves unintentionally choosing words that stigmatize other people.

Unlike Sia, who got defensive when her ableist portrayal of autism was criticized, Lizzo listened and acted, proving that people do, in fact, possess a certain collective power to initiate important conversations, and maybe even trigger real change.

Contrary to popular cynicism, society is very capable of change. We’re all only human and we’re bound to make mistakes. The best we can do is learn humility and follow Lizzo’s lead by cultivating a willingness to learn — without getting defensive or making it about ourselves. After all, it’s how we handle criticism and move forward that defines us.

Who Is The Rock’s Daughter Simone – And Why Is She Getting Hate Online?