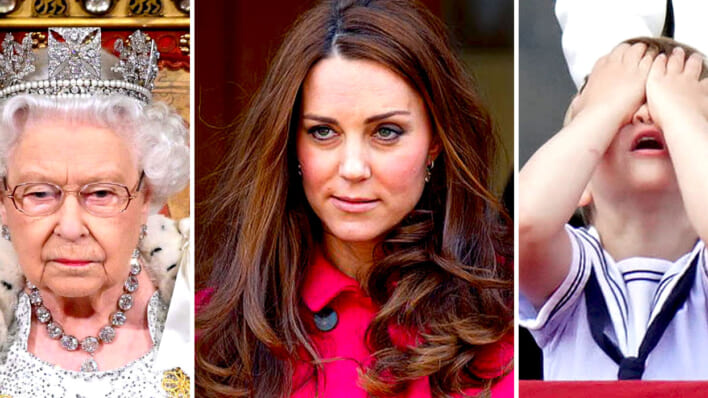 Four-year-old Prince Louis stole the show with his antics, and landed mom Kate Middleton in hot water. Here’s why the criticism wasn’t warranted.

When Britain’s royals make headlines, it’s not always for the best reasons. Whether it’s Prince Harry’s alleged feud with Charles and William, Prince Andrew being taken to court, or Meghan Markle and Harry’s groundbreaking decision to leave, there’s been plenty of drama in recent years. Not surprisingly, royal watchers wondered if Queen Elizabeth’s Platinum Jubilee would be marred by controversy, but some of the biggest headline-making stories ended up being wholesome, and refreshing.

Yes, the four-day celebration gave us all of the pageantry we were expecting, but it also delivered lots of unexpected laughs and viral moments. Among the highlights was Queen Elizabeth’s surprise video with Paddington Bear, which made fans go “wild” and totally stole the show.

However, there was another member of the royal family who gave the Queen a run for her money in the cheeky department. All throughout the festivities, the monarch’s great-grandson, Prince Louis of Cambridge, captivated audiences with his antics and delivered a big dose of reality to the over-the-top celebrations.

Why Prince Louis’ (Mis)Behavior Was Refreshing

It all began on Thursday, June 2 when celebrations of Her Majesty’s 70 years on the throne kicked off with the Trooping the Colour parade. While the Queen was absent for much of the action, she did appear on the Buckingham Palace balcony for the grand finale and was accompanied by several family members, including Prince William, Duchess Kate, and their three young kids.

While onlookers were overjoyed to see Queen Elizabeth, it was Prince Louis who became a viral sensation. While watching various planes fly overhead, the four-year-old covered his ears, made silly faces, and screamed at the loudness of it all.

Despite mom Kate Middleton’s best attempts to make him behave, his antics continued. However, Queen Elizabeth took his behavior for what it was: a child being a child. Louis’ 96-year-old great-grandmother appeared to be genuinely amused and was repeatedly seen chatting with him. According to a lip reader who analyzed the video footage, their exchange was a sweet one. As Louis was enthralled by the planes, Queen Elizabeth pointed out different models and explained, “That’s our Air Force. The Apaches.”

RELATED: The Truth Behind Princess Diana’s Troubled Relationship With Her Sisters

Earlier in the day, Louis also had a very real younger sibling moment with his sister, Princess Charlotte. As the family made their way to the palace in a carriage, Charlotte thought her little brother was waving a little too enthusiastically, so she took his hand and placed it on his lap. Undeterred, he was soon waving again!

Royal kids are just kids and it was refreshing to see little Louis expressing his true emotions, rather than being forced to act like an adult, which he isn’t. As one fan pointed out on Twitter, he was simply “being a typical four-year-old”.

It’s also important to note that his manners were impeccable when they needed to be. During the aforementioned carriage ride, all three siblings bowed their heads as a sign of respect to the soldiers in attendance. Louis also sang the national anthem perfectly on the Buckingham Palace balcony during the final day of celebrations.

Prince Louis delivered more headline-making shenanigans during the closing Platinum Jubilee Pageant on Sunday, June 5. The four-year-old, who was visibly restless, yawned, made funny faces, and jumped on his seat. At one point, he even tried to put his feet up on Princess Charlotte, who quickly pushed them off. “Homie definitely understands the little brother assignment,” wrote one fan on Instagram.

The situation became divisive when Kate tried to discipline her son and Louis appeared to have a tantrum. The young royal stuck his tongue out at his mom, put his hand over her mouth, and frustratedly crossed his arms, showing his displeasure. At another moment, he even held his seat cushion up in front of her face so she couldn’t see the show. It was a very real parenting moment and yet, backlash was swift — and brutal.

Folks accused Kate of having “poor parenting skills,” of relying too heavily on nannies, and of deciding to “put duty before her son’s needs” by forcing him to attend the event. One critic even claimed that “Louis announced to the world he doesn’t respect his mother”.

Others couldn’t disagree more. As Salon pointed out, you can’t expect (or force) children to always be on their best behavior. Being a royal doesn’t magically change that. If anything, it makes things more complicated and stressful as millions of people watch your every move.

Prince Louis’ tantrum didn’t last very long, and watching the entire event painted a very different picture of the seemingly naughty royal. As he got into the show, Louis lovingly hugged his mom, showed off his dance moves, and melted hearts when he went to sit on Prince Charles’ lap.

Supporters loved the silliness and called Louis “iconic,” “adorable,” and “gold”. One user encouraged him to “always be your cheeky, confident self” while another gushed, “This child is a joy to watch (probably a handful to parent!) but what a super little character he appears to be!”

Indeed, Kate was just doing her best as a normal mom in an abnormal situation. She never once lost her cool, even when she didn’t have any help from anyone, not even her husband, who was sitting further down the row. Sharing a photo of Louis cuddling up to Kate, one fan argued that she’s simply “a loving mum navigating parenting three children with the eyes of the world on her and criticism at every turn” and so, “she deserves better.”

RELATED: Why Mariah Carey Will Never Forget Her Encounter With Princess Diana Before Her Tragic Death

Global Parenting Expert and Supernanny star Jo Frost agreed. Offering her professional opinion, she gave Kate major props. “Catherine has never been afraid to tell the kids to stop in public, I love that about her,” she enthused, noting how “royals are expected by the world to behave a certain way but at the end of the day they are children, royalty or not.”

Frost believes Louis’ behavior was totally natural. “It was a long day, little moments like this are going to happen, especially if you are strong willed, sensitive,” she explained. Mike Tindall, who is married to the Queen’s granddaughter, Zara, and was sitting behind Louis, agreed. Saying it was “tough” for the younger royals to keep still during such a long event, he shared how Louis “was just wanting to have fun.” He also revealed that the kids were all riding a sugar high.

Luckily, Kate brushed off the haters and she and William got in on the joke. Taking to Twitter to thank everyone who joined the celebrations, they wrote, “We all had an incredible time, especially Louis…”

At the end of the day, Prince Louis’ behavior during the Platinum Jubilee was real and relatable. As so many parents who sided with Kate said online, parenting isn’t easy nor is it always perfect. And that’s before you add the pressure of public scrutiny to the mix.

Like so many things in life, parenting is unique to each person and it comes in many different forms. There’s no single right approach and rather than critiquing Kate, we should be supporting a mom doing her best. We should also be recognizing how refreshing it was to witness such unfiltered interactions in a family that hasn’t exactly been known for embracing individuality. Because if there’s one thing that the Platinum Jubilee weekend has shown us it’s that we’re all more similar than we are different.