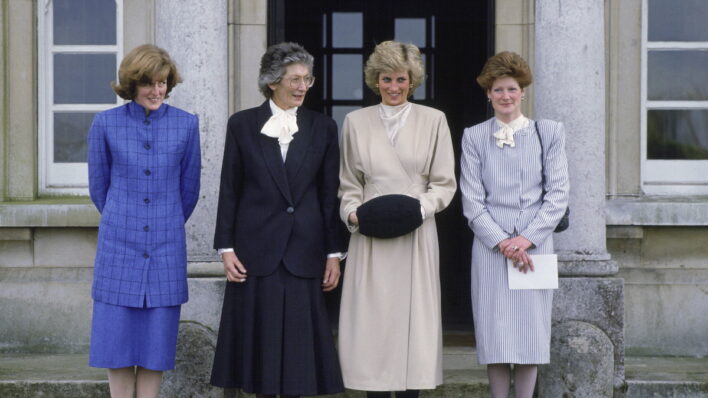 The Truth Behind Princess Diana’s Troubled Relationship With Her Sisters

Diana didn’t always see eye to eye with her older sisters Sarah and Jane but they still did their best to support her when they could.
By Shaoni Das    November 18, 2021

Diana didn’t always see eye to eye with her older sisters Sarah and Jane but they still did their best to support her when they could.

Princess Diana’s tragic death nearly 25 years ago captures how some people will always remain among us.

She’d only been a royal for fifteen years, but the mark she made on our culture is indelible. Her story made a lasting impression on people, who felt as inspired by her rise in popularity as they felt devastated to see her struggling with her press coverage. There’d been something ill-fated from the beginning in how she was introduced and absorbed into the institution; only but a teenager, she had no inkling about how the world, including her husband and in-laws, would come to treat her and abuse her.

Even those who do not remember her life can feel the sting of her absence. If she made such a striking impact on what are essentially random strangers ‘from the future,’ imagine the state of her family members who have to live with the painful memories day after day. Most people are familiar with Diana’s tight bond with her younger brother Charles, but few remember the rapport between her and her sisters, Sarah and Jane. Here’s how they coped with her untimely death.

Diana’s sisters Sarah and Jane “patronized” her at first

The truth of the matter is that while Sarah and Jane do miss their sister dearly, they didn’t always share the closest relationship with her. The Spencer family were part of the aristocrat and were likely raised with the ‘stiff upper lip’ mentality that British people are commonly associated with. They were considered a part of the royal family’s close circle and had been mingling with them for decades and decades, if not centuries.  As such, Diana was well-acquainted with the decorum and etiquette expected in the monarchy. However, contrary to the arrangement in the royal family, the Spencers were as tight-knit as possible under the circumstances.

Diana’s sisters were a couple of years older than her, so she didn’t get to develop a sisterhood with them in her early years. “Diana and I had two older sisters who were away at school, so she and I were very much in it together, and I did talk to her about it,” Charles Spencer told The Sunday Times in 2022.

Moreover, as Sarah and Jane came of age in the British society, they started embroiling themselves deeper in the monarchy, fraternizing with its members and entertaining suitors — as they were expected to do in their time. In fact, Sarah actually dated Prince Charles briefly in 1977, which is how the Prince of Wales stumbled across his future wife. Lady Sarah went on record to take credit for their romance. “I introduced them, I’m cupid,” she told The Guardian back then. As for why she and Charles didn’t work out? “I wouldn’t marry anyone I don’t love, whether it was the dustman or the King of England,” she said famously at the time. She also said the Prince wasn’t “ready for marriage” while they were courting each other. As it turned out, he wasn’t ready to marry Diana, either, but he still went ahead with a proposal.

According to New Idea, Diana’s sisters “patronized” her through their childhood, implying she was too naive and dull-headed, bringing about insecurity in Diana about being “as thick as two short planks.” Sarah also employed Diana as a cleaner at one point, paying a measly income of a pound per week to scrub her apartment. When Diana voiced her fears about settling down with Charles prior to the wedding, the sisters reportedly convinced Diana to disregard her worries and remain in her place. “At that moment, as she seriously considered calling off the wedding, they made light of her fears and premonitions of the disaster that lay ahead,” said Diana’s biographer Andrew Morton.

The conflict persisted over the years, but they still cared about her

Over the years, however, Lady Sarah started becoming more supportive of Diana as the latter began uncovering some startling challenges in her marriage. When Diana was taking part in extramarital affairs as a way to cope with the situation, Sarah was sympathetic. “In a way, she even encouraged Diana to be wild and to have lovers,” said royal author Judy Wade. Through her separation and ultimate divorce from Charles, Diana finally began to find a warm companionship in Sarah, someone who’d seen first-hand how difficult the royal family could be.

Sarah provided honesty and assurance to Diana when she was at her weakest, so despite their earlier struggles, the sisterhood came through. Sarah McCorquodale continues to be close to the royal family; she’d been the president of the Diana, Princess of Wales Memorial Fund until the foundation’s discontinuation in 2012. She attended both William and Harry’s wedding ceremonies and participated in the 2017 documentary titled Diana, 7 Days. Reflecting on learning about Diana’s car accident back in 1997, Sarah said she felt nothing but “love and shock.”

While Sarah eventually reconciled with Diana before her demise, it’s a different case for their other sister. Jane’s marriage to the Queen’s assistant private secretary, Robert Fellowes, had always been a thorn in the side of the Spencer family. It directly clashed with Diana’s growing distrust in the establishment and completely severed her rapport with Jane. In one instance, Diana suspected her brother-in-law of spying on her to expose incendiary information about her state of affairs. As a result, Jane distanced herself from Diana’s deteriorating marriage and the accompanying public atmosphere. In the last few years of Diana’s life, there was little to no communication between her and Jane. Jane has also refused to take part in any public appearances or documentary features about her sister’s life.

However, when the sisters heard about Diana’s death, they rushed to Paris to bring back her body. Despite their complicated history and their staggering dissimilarity in values, the sisters knew that their love for Diana triumphed over everything else.

Make memories while you can

Diana’s parting is a brutal reminder to everyone about cherishing every moment in their lives and not hesitating to spend time with your loved ones. In some way, our collective culture is still reeling from her shocking death; we still find ourselves imagining an alternative reality in which she was still alive and kicking. However, the mourning also presents an opportunity to examine our behaviour with not just the royals but our own circle.

Of course, you will have skirmishes with your friends and family here and there, but what you have to recognize is whether the animosity is unsalvageable or if it’s still possible to have a relationship with them, boundaries withstanding. The last thing you want is to carry on fighting with someone you love, only to learn they’re not going to be around any longer.