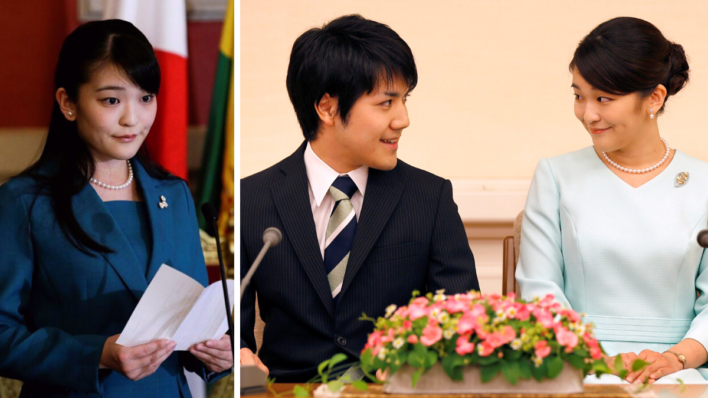 Japanese Princess Gives Up Title and Refuses $1.3M – Marries Commoner Despite All Objections

The Japanese lovebirds chose to fight for their love as a team and refused to listen to haters despite the negativity that surrounded them.
By Joel Balsam    November 29, 2021

The Japanese lovebirds chose to fight for their love as a team and refused to listen to haters despite the negativity that surrounded them.

In Japan, it is common for male royals to marry whomever they choose without losing their power. But the same courtesy is not extended if you’re female.

According to Japanese law, female imperial family members forfeit their status upon marriage to a “commoner.” And that’s exactly what Princess Mako did.

As reported by BBC, Princess Mako has married her college sweetheart Kei Komuro, forfeiting not only her royal status but also her right to a royal wedding as well as a traditional payment of $1.3 million.

“I am very sorry for the inconvenience caused and I am grateful for those… who have continued to support me,” she said, according to an NHK report.

For me, Kei is irreplaceable – marriage was a necessary choice for us.

News broke of Mako and Komuro’s relationship years ago and the buzz heightened when the two announced they were engaged to be married in 2017.

Their relationship received tons of negativity, leading to post-traumatic disorder for the princess, according to the Imperial Household Agency (IHA)—something that has happened to other female Japanese royals who weren’t accepted for who they choose to marry or for their inability to conceive of a male heir.

The situation is also reminiscent of Prince Harry and Meghan Markle‘s decision to leave the British royals as well as King Edward VIII’s decision to abdicate the throne in favor of marrying American Wallis Simpson in 1936.

The reason for the backlash against Mako has been linked to Komuro’s status as a “commoner,” the fact that his mother had financial problems, and simply because he’s seen as unfit for a princess. One of the biggest criticisms against him came when he returned from the United States- where he had been offered a job at a law firm- to Japan sporting a ponytail.

Criticisms are so fierce that they’ve led to protests on the streets of Tokyo.

But the couple has held to their convictions, with Komuro telling AFP that love shines above all.

I love Mako. We only get one life, and I want us to spend it with the one we love.

“I feel very sad that Mako has been in a bad condition, mentally and physically, because of the false accusations,” Komuro added.

It’s hard to imagine not being allowed to marry the person you love- but we don’t have to look far to find locations where that’s the norm. We don’t even have to look further than a decade in the United States to see how the right to marry who you love has been restricted (2015 for same-sex marriage).

We cannot choose who we love—love chooses us. And you have to respect Mako and Komuro for realizing that despite immense pressure to do otherwise.

love has no boundaries
“Being deeply loved by someone gives you strength while loving someone deeply gives you courage.”- Lao Tzu
Tags
Share
← Prev Post Next Post →