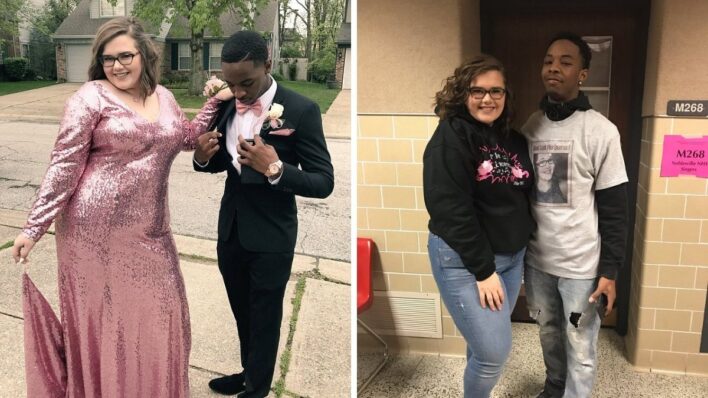 Instead of being ashamed, one young man defended his beautiful girlfriend when trolls came out to attack her.
By Sophie Babinski    November 25, 2021

Instead of being ashamed, one young man defended his beautiful girlfriend when trolls came out to attack her.

One of the stereotypes about being young is being easily influenced. Often, teens join in on bullying and succumb to peer pressure when tested in front of their peers. This was not the case for one young man.

As a teen, so many hopes and dreams are pinned on prom night, which is said to be one of the best nights of high school! This was the case for Tre Booker and his girlfriend Madison, who both felt gorgeous and put together in coordinating outfits. Madison looked stunning in a sparkly pink dress, while Tre looked smart in a suit complete with a pink bowtie and corsage to match his love. Feeling proud of their amazing prom looks, the two posted their prom photos online.

Prom with the loml 💗 pic.twitter.com/yiYHfQjWo4

While many friends of the pair had positive things to say, not everyone was so friendly. Madison, shocked and saddened, responded to the anonymous user:

Don’t see how people can be rude to people they don’t even know pic.twitter.com/wx7cu7OGgp

That’s when Tre jumped into the mix, tweeting:

The sweet interaction between the two led them to go viral. Many people applauded Tre and complimented Madison on how beautiful she looked in her sparkling dress.

As Madison and Tre’s experience illustrates, there will always be haters who want to rain on your parade. Just like this young couple, the best response to those people is to lift each other up, complement each other, and recognize what makes us special. Ignore the naysayers, and hopefully one day they will go away.