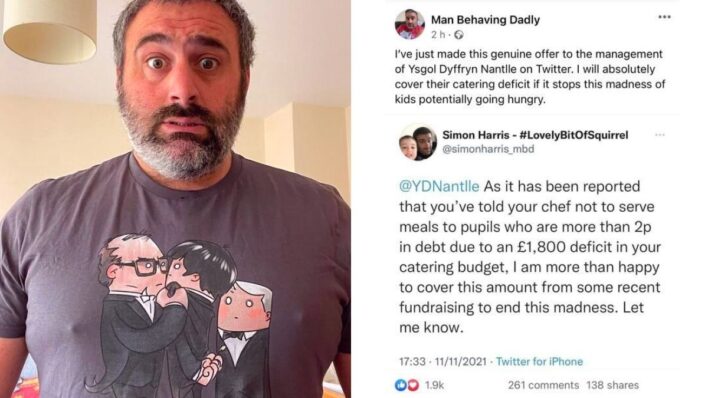 The school council at Ysgol Dyffryn Nantlle in Penygroes, Wales, drew a line in the sand: if even a single student owes one penny on their meals, no kid will be fed.

They made this stance in a letter sent to parents from Headmaster Neil Foden. In it, Foden said he was “very surprised to learn at the end of the last half term that there was an unexpected deficit in our school meals budget… Closer inspection revealed that this was because a handful of pupils had run up debts totaling more than £1,800 ($2410).”

“I am sorry that we have had to take these steps, but the scale of the default means that something clearly has to be done,” Foden wrote, according to BBC.

Ignited a firestorm in the UK

Needless to say, parents were not happy with this decision.

“I understand that people should pay their bills, but at the same time, people are struggling,” said Darren Owen, who is a father of five. “Surely they know who the parents are. Can’t they help them?”

The issue even reached all the way to the Manchester United soccer team, and star Marcus Rashford commented on it on Twitter.

Has the pandemic not taught us anything? Can we not be understanding? Come on now…

The school does offer the most disadvantaged parents free meals, but won’t help these particular indebted students for whatever reason.

“In terms of payment of school meals, an online system has been introduced on which parents should ensure that sufficient funds are in place to pay for their child’s school meals,” a spokesperson for Gwynedd council said, according to BBC.

“The payment system offers some flexibility for parents who may for whatever reason not be able to make payment for a short period of time. Reminder messages are sent as required to ensure that no significant debts are incurred… We do not operate a blanket policy of refusing meals to pupils, and will discuss this matter directly with the school.”

But the students found an unlikely savior: award-winning dad blogger Simon Harris said he’d fundraise to pay the bill for all parents.

“As it has been reported that you’ve told your chef not to serve meals to pupils who are more than 2p in debt due to a £1,800 deficit in your catering budget, I am more than happy to cover this amount from some recent fundraising to end this madness. Let me know,” Harris wrote, according to The Daily Post.

I will absolutely cover their catering deficit if it stops this madness of kids potentially going hungry.

Speaking to North Wales Live, Harris added: “We could all sit here and argue about ‘parents who can afford it but won’t pay’ and ‘parents spending the cash on whatever else instead’ until the cows come home. All I’m interested in is putting this rubbish to bed and getting the kids fed.”

No child should go hungry

At this point, the dispute is still ongoing but it’s worth pausing to appreciate this dad’s gesture. No kid should go hungry, period. And it is our responsibility to ensure that, especially during a pandemic.

So good on this dad for standing up to the student council. Hopefully, he stands by his promise to pay off the debt.

Want an amazing resource for you and your children? Check out our article on quotes to inspire your kids.