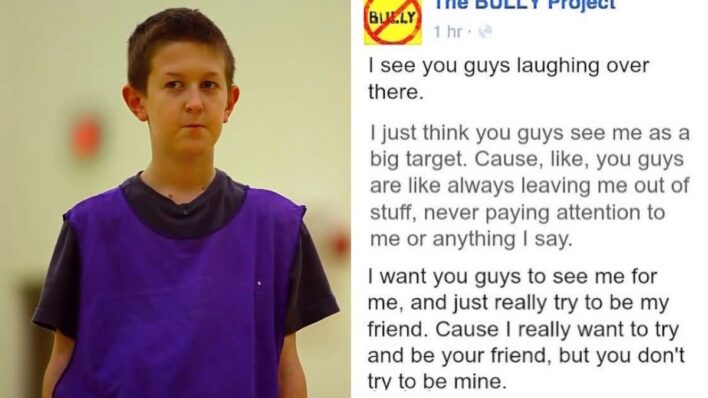 Tired of living in the shadows of bullies, one brave kid stood up to them in an unforgettable fashion.
By Bryan Liquor    November 19, 2021

Tired of living in the shadows of bullies, one brave kid stood up to them in an unforgettable fashion.

It’s a known fact that bullying is a common occurrence in schools. According to one report by ABC News, “nearly 30 percent of students are either bullies or victims of bullying” while “160,000 kids stay home every day from school because of bullying.”

One of those tormented kids was a boy named Jake. As someone who has autism, he was often ignored and cast aside by the ‘cooler’ kids and at risk of being another statistic.

However, Jake wasn’t having that.

Standing up for himself

Unlike others who would suffer in silence, Jake had a chance to confront his bullies. That chance came as a part of the Bully Project, a social campaign to stop bullying. Its stated goal is “changing a culture of bullying into one of empathy and action.”

Cameras captured Jake and his peers playing soccer during gym class when suddenly the teacher stopped the action and asked everyone to sit along the wall – except for Jake.

After taking a deep breath, he began.

He even called out some kids laughing at him in the corner, before concluding that “I just really wanted to come up here and tell you guys that’s how I feel.”

His world has changed since

Not only has the video caught fire with over a million views, but Jake told Upworthy that his life has vastly improved since taking a stand.

“Bullying has had a big impact on my life, but since the movie, I’ve made a lot of friends,” he said.

He also has advice for kids like him who are struggling.

“For other kids with autism, if you’re getting bullied, try and tell them to stop and not give a reaction — if that doesn’t work, go to an adult.”

“It might seem hard cause we can’t handle stress as well as other kids, but you will get through it and you’ll be awesome — actually you already are!” Jake concluded.

Bullying does not make you cool — you might think you are on the top of the food chain — but you’re not going to be there forever.

We write a lot about the importance of helping others who can’t help themselves, and rightfully so.

However, Jake reminds us that our voice is a powerful thing. Standing on his own two feet, he staked his worth and rose above his bullies.