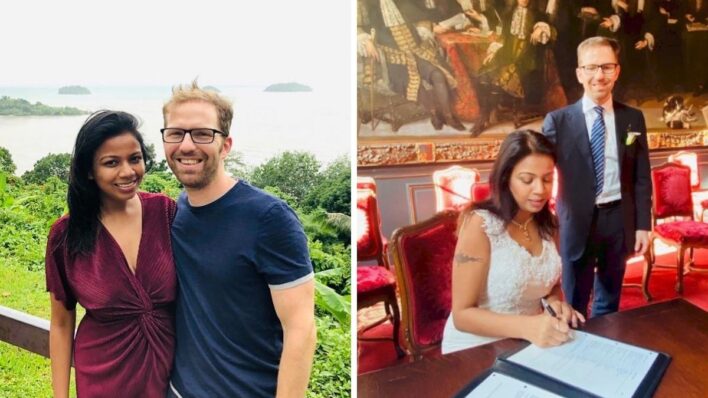 One man who put his own life in danger to save a yoga teacher from drowning never expected to fall in love.
By Sophie Babinski    November 17, 2021

One man who put his own life in danger to save a yoga teacher from drowning never expected to fall in love.

A calm yoga retreat in India turned dangerous when one of the teachers got caught in a strong current during her habitual morning swim in the ocean.

Nupur Gupta of Kerala, India, was teaching at a two-week yoga retreat taking place in a resort. As a habit, she would take a swim in the ocean between classes to cool off and clear her head. One day, though, the current was too strong and she felt herself getting pulled away.

Attila Bosnyak of Amsterdam, an attendee of the yoga retreat, was escaping the winter chill in his own country. He was on the beach when Nupur got caught in the current, and immediately rushed to her aid. While they hadn’t spoken at all during the retreat, they had seen each other around and he knew he had to do something to help her.

Then I saw this man coming towards me. He came very close to me, to hold my hand and pull me out, but just about that time I was pulled in by the ocean.

Attila realized that he alone wouldn’t be able to rescue Nupur, so he swam to some rocks and made sure the on-duty lifeguard saw him, who was able to bring both Attila and Nupur to safety.

Once on the shore, both of them were shaken up from the event, with Attila bleeding on a lounge chair. Nupur felt terrible that her new friend had been injured while trying to rescue her and set about nursing his wounds.

Something changed, for me, in that moment. There was a click in my heart somewhere.

“I think it was a magic moment,” Attila agreed.

From near-death to forever

The experience bonded Nupur and Attila, who extended their yoga retreat by an extra week so as to spend time together, and then started a long-distance romance when it was finally time for them to return to their respective homes. After being kept apart, Attila finally decided to move to India to be with the love of his life while she was dealing with a family illness. Finally, he proposed and the two were married!

It really seems like a heaven-sent relationship. Because we could be completely different people, having some memories of that accident, but spending our lives in different places and different cultures, and continuing as we were before.

Now, they are married and living in Amsterdam. Nupur is grateful for the life-threatening event, because it ended up being one that defined her future- for the better!

The love story of Atilla and Nupur serves as a reminder that no matter how scary and stressful life gets, there is always a light at the end of the tunnel. Nupur never thought that her soulmate existed all the way around the world in Amsterdam. All of the trials and tribulations we live through help shape us as people and guide us in the right direction. You never know what might be right around the corner.

When THere is Love, There is a way
“The odds are stacked against you until you realize: You make the odds.” ― Tehya Sky
Tags
Share
← Prev Post Next Post →