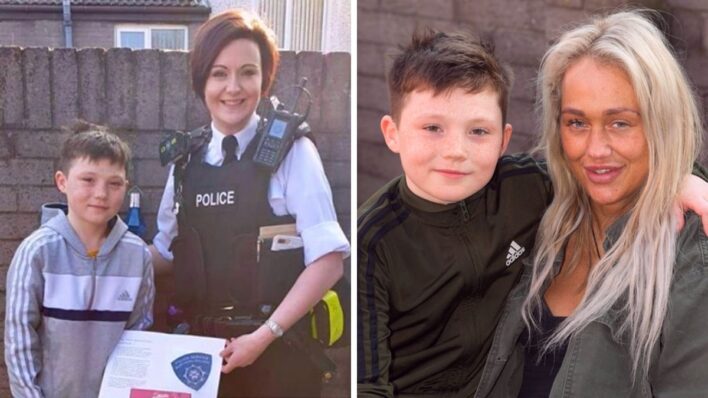 One 9- year-old boy made headlines when he bravely confronted attempted kidnappers instead of running away.
By Joel Balsam    November 16, 2021

One 9- year-old boy made headlines when he bravely confronted attempted kidnappers instead of running away.

Nine-year-old Tiernan McCready was walking home from school in Londonberry, Northern Ireland, when he noticed three men grab an 18-year-old girl and attempt to get her into a van. Instead of running away, he decided to act.

“I was scared when I saw it but I just couldn’t have stood there and done nothing so I tried to distract them so she could get away to safety,” he told Belfast Telegraph.

McCready shouted at them, saying he had a phone and if they didn’t let her go he’d call the police.

“I think that frightened them a bit. They let her go and she was able to run,” he said.

It could have been way worse

The 9-year-old and teenage girl started to run away, but he fell on some steps and cut his finger on glass.

Still, they ran on to safety.

Before McCready got home to tell his mom to call the police, he gave the teenager a stern talking to.

“I told her that it was very serious and that anything could have happened to her,” he recalled to Belfast Telegraph.

I told her that her mummy could have been waking up tomorrow with no daughter. I ran home and we phoned the police and told them.

Reflecting on the situation, McCready was proud of how he reacted.

“I am pretty happy,” he said. “It’s kind of mind-blowing. I am just happy that the young girl is safe now.“

“This just shows how big a heart he has,” she said. “This is just Tiernan, he is a gentleman, he is so kind-hearted and would do anything for anyone. I am so proud of him for doing this.”

Police recognized Tiernan’s heroism too and awarded him with a badge of honor and a box of chocolates.

“Most adults would be paralyzed in shock, confusion, or fear and fail to act until it was too late. Tiernan reacted instantly,” police wrote on Facebook.

Let that sink in. This could have been the start of a potentially serious and harrowing crime. That girl could have been my child, my sister, your child, your family member.

“This doesn’t go anywhere near to paying off the debt our community owes this boy,” the post continued. “Our youngsters often get a bad rep but remember the vast majority are brave and big hearted just like Tiernan.”

Look out for others

Many fully-grown adults wouldn’t do what Tiernan did. But with big risk comes big reward and the teenager was able to escape, safe and sound.

This is yet another reminder to keep your eyes peeled for strangers in danger around us. You could end up saving a life.