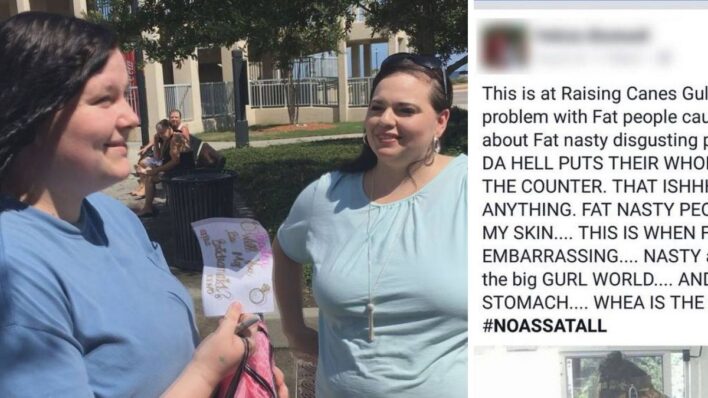 After a photo fat shaming a fast food worker was circulated online, one woman decided to put her foot down and stand up for herself.
By Bryan Liquor    November 12, 2021

After a photo fat shaming a fast food worker was circulated online, one woman decided to put her foot down and stand up for herself.

It’s happened to us all: A friend tagging you in a bad picture, usually due to lighting, liquor, or both. It’s easily fixed, no harm, no foul.

Now imagine that scenario, except the friend is a stranger, and this time your picture is posted all over Facebook and subject to cruel shaming.

This would be 20-year-old Jessica Pruitt’s nightmare.

After her shift at Raising Cane’s fast food joint, she made a shocking discovery. All over social media was a picture of the plus-sized Pruitt working at the drive-thru, her stomach resting on top of the counter.

The woman who shared the original post referred to Pruitt as “nasty and disgracing” and said, “I talk about fat, nasty, disgusting people.” Her toxic rant went on.

“Fat, nasty people get under my skin. This is when fat becomes embarrassing, nasty, and disgracing to the big gurl world. And she only has stomach where is the rest of her.”

Other people then started making several fat-shaming comments under her post.

Pruitt told WLOX she was crushed.

I was upset. I was heartbroken. I know I’m a big girl, but I think I’m decent looking.

A stranger came to her defense

Seeing the cruel post, Laurie Carter, another stranger in nearby Saucer, was furious and inspired to act.

That could have been me standing there that day at that counter. I have a pudge in my stomach. But it was her this time. I wanted her to know she doesn’t have to go through this alone.

With Pruitt’s approval, Carter decided to hold a rally in support of Pruitt and to raise awareness about bullying. Pruitt will also be the guest of honor at a ‘Stand Against Bullies’ event.

Carter confided that hitting back at bullying was a personal matter. “I’ve dealt with being bullied my whole life and whenever I saw that I was angry, hurt, and upset.”

Speaking with the Clarion-Ledger, Pruitt said she appreciates all the love, including from her manager and company, adding that her weight isn’t by choice.

“Being overweight runs in my family,” she said. “I’ve tried to lose weight but I was recently diagnosed with a disorder that makes it hard to do that.”

Stand up against bullies

Carter says she and Pruitt have since struck up a special bond together.

“I decided to turn that anger, hurt, and upset into something positive and to try to reach out to Jessica and to let her know that she wasn’t alone in this, and that I would be there for her every step of the way,” she said.

Carter said that whenever she feels low, she remembers her grandmother’s words, ones that we can all live by.

She always told me how beautiful I am, that weight is only a number. That’s not who I am. That I’m a beautiful person inside and out, and to have confidence in myself because I’m a beautiful girl.

Instead of focusing on the cruel fat-shaming woman, there’s so much more to this story. It’s about the power of unity and camaraderie over cruelty. It’s about banding together instead of giving into one cowardly act. Thanks to one woman, Jessica Pruitt knows she’s not alone.