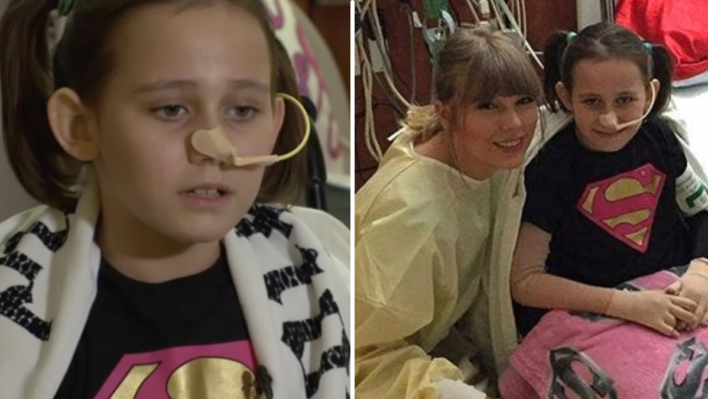 8-Year-Old Suffers Serious Burns Because of Her Dad – Then, Taylor Swift Steps In

Music megastar Taylor Swift has a busy schedule, but when she saw an 8-year-old’s demo tape, she stopped everything.
By Bryan Liquor    October 25, 2022

Music megastar Taylor Swift has a busy schedule, but when she saw an 8-year-old’s demo tape, she stopped everything.

For Isabella McCune, every day is agony. The 8-year-old Arizona resident suffered burns to 65% of her body when a bonfire her father, J.D. made on St. Patrick’s day got out of control.

When she’s not bedridden, her days consisted of surgeries (She has had 10 so far), the painstaking cleaning of her wounds, and physiotherapy to help her walk again.

Through it all, her mom Lilly told AZ Central that her girl’s kept a brave face through it all. “She was always a tough girl, always strong, but this is a new level of strength,” she said.

How an Injured Little Girl Found Strength in the Hospital

A big source of her strength are the pictures and songs filling her room of her favorite artist, Taylor Swift. The singer’s pictures are on the ceiling since Isabella can only lie flat. She leans on those and her favorite song, ‘Ready for It’ to stay positive when the going gets tough.

However, the only thing that stung as much as her wounds was being unable to see Swift perform. She was in town as part of her ‘Reputation’ tour.

Yet, a hospital bed can’t stop the heart of a super fan. And so with motivation and a little faith, McCune recorded her own demo tape for the pop star.

“Your music helped me through tough times,” she started, her voice weak.

Then, she offered a sweet invite to the pop princess herself. “I heard you were here, and I wanted to visit you but maybe you can come and visit me. So maybe that can happen,” she said.

It turns out that someone special saw this Isabella’s video, and was about to rock her world.

Isabella was in her wheelchair in her room one day when her little eyes did a double-take. This time, it wasn’t a picture on the ceiling but Taylor Swift in the flesh who popped in for a visit.

After pinching herself, Isabella told Swift in person how much her music meant to her. Swift said she was honored, and gave her and 14-year-old brother Zachary some tour swag and autographed pictures.

To top it off, Swift wrote a very special entry in Isabella’s journal.

“Isabella! I hope you feel better soon and I’m honored you’ve been listening to my music. You’re so awesome and I can’t wait to have you at a show,” the note said.

There’s a moment that can heal any wound.

It’s still a long road ahead, but Isabella is having more success with each day. She said that her motivation to stay smiling isn’t just her family.

“It’s always good to keep a smile on your face in the hospital in case another patient comes by and they see you,” she says. “They might be sad or scared and need a smile,” she said.

RELATED: Twilight Star Taylor Lautner’s Fiancée Reveals Her Childhood Crush in Viral TikTok – And It Is Someone Unexpected

It is said that time heals all wounds. Let’s hope that also goes for J.D., who will have to find a way to forgive himself for an accident that could have happened to anyone.

A magical visit from Taylor Swift is sure to be the perfect remedy that even the doctor couldn’t have prescribed. You can be sure that Taylor Swift’s new ‘Midnights’ album will be Isabella’s comeback soundtrack, so watch out.