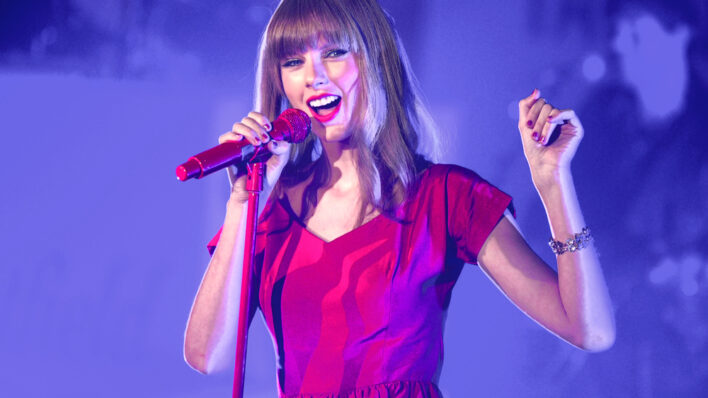 She may be one of the world’s biggest pop stars ever, but Taylor Swift hasn’t forgotten her musical beginnings in
By Eliza Theiss    April 10, 2018

She may be one of the world’s biggest pop stars ever, but Taylor Swift hasn’t forgotten her musical beginnings in Nashville’s country scene. While the “Delicate” singer may have transitioned from country to pop a few years ago, a recent surprise appearance in one iconic Nashville club shows she’s still very much connected to the city and genre that launched her career.

Here are some beautiful HQ pictures of Taylor Swift performing at the @BluebirdCafeTN last night! pic.twitter.com/SThuA4WbV7

Although much-respected country songwriter Craig Wiseman was the advertised headliner at a Bluebird Café event, 40 lucky patrons were recently treated to a surprise performance by the singer, according to The Tennessean. Accompanied by an acoustic guitar and dressed down in a black sweater and ponytail, Swift performed several of her hits songs, including acoustic versions of chart-toppers like “Shake It Off” and “Love Story.”

Taylor Swift singing Shake It Off, one of her biggest hits at the place where she got discovered is the greatest thing I’ve seen today! ?? pic.twitter.com/5P6sZJYG8w

The pop star’s appearance was even more meaningful considering she has kept a fairly low profile since her latest album – Reputation – dropped earlier this year. With her Reputation tour expected to gross between $350 and $500 million across dozens of global arenas, a club show is definitely a high rarity for Swift these days.

Appearing for a documentary celebrating the Bluebird Café’s 35th anniversary, Swift took the opportunity to talk about her musical beginnings, reminisce with collaborator Craig Wiseman and express her gratitude to the iconic venue. “I wanted to say a big thank you to the Bluebird Café. I think any songwriter in town would echo my sentiments and say that this is the only place where this exists – this particular place where to come and hear the writer’s take on the songs they’ve put out into the world,” she told The Tennessean.

As a special shout-out to her country roots, Swift also performed “Better Man,” the first song written by her and performed by another artist to make it big. Written for Little Big Town, the song became a country chart-topper in 2017.

Now 28, Swift got her first big break at the Bluebird Café when she was only 14, after record label exec Scott Borchetta saw her perform at the venue. By 2006, Swift was releasing country hits like “Love Story” out of Nashville – a city that remains close to her heart.