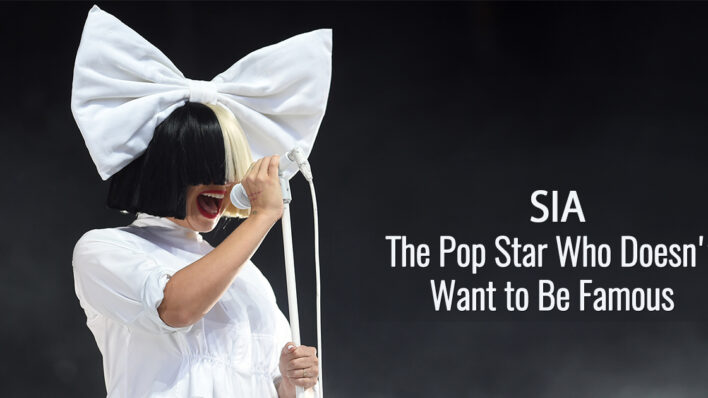 Sia’s Life Story: The Pop Star Who Doesn’t Want to Be Famous

While many dream of fame, Sia runs from it. Her increasingly bizarre methods to hide her face from the
By Jenny Medeiros    March 12, 2018 While many dream of fame, Sia runs from it. Her increasingly bizarre methods to hide her face from the public eye are almost as famous as her music.

Many believe it’s nothing more than a publicity stunt, when in fact it’s her method of survival. After years of struggling with mental illness and addiction, the glamorous life she dreamt of as a child had turned into an everyday nightmare. The pressure of fame became overwhelming, leading Sia to make an important decision while holding a suicide note in her hand.

This is the life story of a gifted songstress who learned an important lesson on thriving in a culture that always expects her to be camera-ready.

Raised in an artistic family

Sia Kate Isobelle Furler was born on December 18th, 1975, in Adelaide, South Australia. Her mother was an art lecturer and her father was Phil Colson, a blues guitarist known as ‘Philby’ in their hometown.

Her creative persona began to develop during her rather unusual childhood, where she was surrounded by circus performers, actors, and famous band members. Growing up with the arts at center stage, 10-year-old Sia concluded that if she could succeed in something artistic, her parents would love her more. So she turned her sights on becoming an actress.

Sia’s family life was generally musical and upbeat, but as the years went by, her father became less like his usual fun and happy self. His late-night gigs and drug use brought out a darker side at home. His mood swings eventually divided the family, and his wife filed for divorce.

Sia didn’t see much of her father after he left for Sydney. Now that her home was quieter, she filled the silence with music from the radio. For the next four or five years, she immersed herself in pop records, and her pursuit of becoming an actor began to shift.

Finding her voice and addiction

At 17, Sia was working at a local café when her friend from Crisp, an Adelaide band, mentioned the band was in need of a new lead singer. By now, Sia knew she was gifted with a unique singing voice, so she showed up to the rehearsal and was handed a mic. As soon as she started singing, the band knew they had found what they were looking for.

From then on, Sia performed here and there with the jazzy ensemble, although her fellow members quickly realized she was no extrovert. She relied on the numbing effects of alcohol to be able to perform live shows. Gradually, the habit turned into an addiction.

After four years performing, the band split up. Sia was now 21 and planning to move to London to live with her then-boyfriend. They had just gotten back together and wanted to travel the world. Weeks later, she was in a stopover in Thailand when her mother called. Sia had a feeling the call was about bad news, but she never imagined she would hear that her boyfriend in London had been killed by a taxi.

A devastated Sia returned to Australia, and her drinking only intensified. Soon after, the roommate of her deceased boyfriend called and invited her over to London anyway. They sent her a ticket, and Sia stayed in a three-bedroom flat with a dozen other Australians. There, she spent the next six years drinking, doing drugs and drowning her sorrows.

One day, a friend of her cousin asked Sia to sing at a local jam session. She needed a distraction so she accepted. Running on her usual alcoholic fuel, she got up on stage and serenaded the audience with a soul classic. At that moment, a local music mogul ran up to her and yelled, “You’re with me!”

Sia now had her first manager. Thanks to his connections, she became more familiar with the inner circles of the music industry and her voice found its way to record studios. However, she left after finding out that her manager was actually a cocaine dealer.

Shortly after, the chatter about her distinctive voice earned 25-year-old Sia her first record deal with Dance Pool, a sub-label of Sony. She released her first single, which reached the top ten on the UK Singles Chart. The following year, Sia blended retro jazz and soul music into her second single, detailing the loss of her boyfriend. It was a minor hit in Britain, but became a club staple.

Sia became known in the dance/house scene and was asked to sing on a few albums of the English duo Zero 7. Her contributions were memorable, and the song “Breathe Me” was featured in the final scene of the popular TV series Six Feet Under. The song became an instant viral sensation, reaching 1.2 million sales in the U.S. alone. While Sia was more than happy to stay out of the spotlight, her manager insisted that she take hold of the current buzz and go on tour. It was what singers were expected to do, so she complied.

From the U.S. to Britain, she graced audiences with her soulful music from one stage to the next. Although she was deeply introverted, her social anxiety melted away the minute she sang into the mic. But after 13 years of incessant touring, irregular sleeping schedules, loneliness, and exhaustion, it all became too much for her to bear.

The pressure of being famous plunged her into a deep depression, and she became entirely dependent on drugs and alcohol. She was then diagnosed with bipolar disorder and put on medication, only to become addicted to those too. Sia desperately wanted to retire from her career and escape the forever-judging eyes of the media. Before long, it wasn’t just her career she wanted to give up on.

At 35, while living in New York, Sia called a drug dealer and ordered two of everything he had — except meth and heroin. She then stashed the drugs away, waiting for the right moment. That year, she was diagnosed with Graves disease, just another drop in an overflowing cup.

Four months later, Sia decided it was time to take the drugs. She planned to check into a fleabag motel and end her life in private. She left written instructions for her dog walker and another for the motel manager to call an ambulance. Sia didn’t want anyone to have to find her dead body.

Rehab and a career in songwriting

Before Sia could enact her suicide plan, a friend inadvertently called. Sia took the timely interruption as a sign. She then flushed the drugs down the toilet and enrolled in a 12-step program to sober up. To save herself from unwanted marketing events, Sia fired her insistent manager. Her new manager understood her aversion to fame and suggested she try writing songs for other singers instead.

At first, Sia didn’t take to the idea. She was known for her quirky personality and she doubted many artists would want that in their music. But she soon discovered she could write down a word and quickly build a song around it.

The words poured out from her past struggles and she realized that this was how she could hide in plain sight. Sia retired from recording her own songs, and spent her days happily writing from home, only leaving to walk her dogs.

From Beyoncé to Katy Perry singing them, her song lyrics topped the charts and sold millions of copies. In 2014, Sia returned with songs of her own that she simply couldn’t give away.

Her album 1000 Forms of Fear was the first in four years, causing a stir with top songs like “Chandelier” and “Elastic Heart.” The world called for a public appearance, but Sia was determined to maintain her need for privacy and be true to herself, regardless of what pop culture dictated. In order to protect herself, Sia refused to promote her latest album and posed for the cover of Billboard with a paper bag over her head. She also stepped in front of the cameras hidden under oversized wigs and turned her face away in her music videos, interviews, and even during on-stage performances. Ironically, her unusual antics to escape showing her face to the world made Sia even more famous.

Between her therapy sessions and her favorite hobby of watching TV in bed with her dogs, Sia has undoubtedly become a one-woman hit factory. She has written songs for some of the biggest names in the music industry and collaborated with many more. Her soulful music has also enriched countless soundtracks for box-office hits and her scarce albums never fail to top the charts. But her distaste for fame remains the same, as she has written herself, Sia and fame will never be married.

Regardless of her scarce public image, Sia continues to cause a stir with her heartfelt lyrics and carefully crafted melodies. After she sold her first song without even leaving her apartment, she found that she didn’t have to sacrifice herself to express her creativity. She didn’t have to submit to other people’s expectations to channel her talent. It may have taken years of struggling and overcoming the lowest point of her life, but she finally realized that nothing is more important than being true to yourself.

It’s not always about looking pretty or cute. It’s about expressing yourself, however that may be.