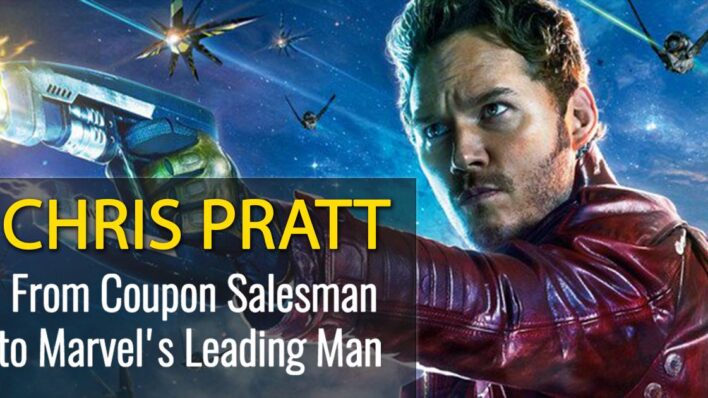 Chris Pratt is widely known for his performances as the quirky space hero in Guardians of the Galaxy and the
By Jenny Medeiros    February 28, 2018

Chris Pratt is widely known for his performances as the quirky space hero in Guardians of the Galaxy and the rugged researcher in Jurassic World. From acting in fun-loving comedies to suspenseful dramas, the former TV actor has turned many heads with his versatility and memorable characters. Starting out as a door-to-door salesman and living in a van, the somewhat goofy teen was far from leading man material. But his rise to success was a surprise to everyone but himself, as he had always believed he was destined for fame.

Pratt’s life story is an odd blend of perseverance and sheer luck, where his readiness to seize every opportunity led him from waiting tables to breaking the box office.

Born with a prediction

On June 21, 1979, Christopher Michael Pratt was born in Virginia, Minnesota. His mother worked as a cashier at Safeway and his father made a living in construction.

Pratt grew up the youngest of three siblings in a tight-knit, Christian family. He spent his childhood days playing outside and flipping through the pages of his favorite comic books. At school, he was largely uninterested in his education, and instead focused on earning the reputation of “class clown.” He held this title throughout his schooling years, although he later became interested in wrestling competitions.

One afternoon, his concerned coach called Pratt into his office and asked him, “Chris, what do you want to do with your life?” The laid-back teen simply shrugged and replied that he had no idea, but he knew that someday he would be famous. His coach merely shook his head at the absurdity.

After graduating Lake Stevens High School in 1997, Pratt decided to capitalize on his knack for improv comedy and pursued acting studies at a community college. At 17 years old and halfway through his first semester, he lost interest and dropped out. He still didn’t quite know how he was going to become famous, but he figured that by trying a bit of everything he would eventually figure it out. So for the next two years, Pratt worked all sorts of odd jobs, from selling coupons to stripping for friends, before finally accepting an invitation to relocate to Hawaii.

Living the dream in a van

At 19, teenage Pratt landed in Maui to live a bohemian lifestyle with his friend. They traveled around in a van, slept in tents on the beach, and worked only enough to cover their basic necessities. By day, he cruised the island. By night, he drank while loudly singing along to Eminem.

Although Pratt thought he was living the dream, he couldn’t shake off the feeling that he was meant for something more. Eventually, he decided it was time to change pace. He got a job serving tables at the Bubba Gump Shrimp restaurant in Maui. It wasn’t the fame-filled opportunity he was searching for, but it was better than selling coupons door to door.

On one particular day, in 1998, he was serving tables as usual when he approached a newly seated customer. He struck up a friendly conversation, and discovered that the customer was actually actress and director Rae Dawn Chong. He jumped at the chance to ask her all about making movies, mentioning he’s always wanted to be in one. Rae took an instant liking to the aspiring actor and offered him a role in her upcoming film Cursed Part 3.

Pratt had no real-world acting experience whatsoever, but he was prepared to do anything as long as he didn’t have to wait tables again. Rae purchased his ticket and flew the inexperienced Pratt, who only had $60 to his name, to pursue his next adventure in L.A.

The challenge is not finding the attitude, but it’s really just being open and willing to go for it and try different things.

Working to find his future on set

The moment Pratt arrived on the set of Cursed Part 3, he knew acting was what he wanted to do for the rest of his life. He made the most out of the experience on and off camera, leaving the cast and crew with fond memories of his charismatic persona.

Although the movie was a complete failure, it served the purpose of affirming Pratt’s dream. For the next few months, he went out and auditioned for every possible job that involved being in front a camera.

At 23 years old and after a dozen small-time appearances, he scored the part of a high school jock on his first series, Everwood. Four years later, he was cast on The O.C. as a character with similar traits. Although he was earning better roles, he was growing tired of portraying the same-old personas. As the roles he played began to blur together, Pratt turned to comfort eating, binging on food whenever he felt sad. It was during those years that realized his dream was to act in a comedy, where he could truly be himself.

In an ironic twist of fate, his weight gain gave him the “slobbish” appearance considered apt for comedy. In 2009, at 30 years old, Chris landed his very first role in a comedy series. Over the next six years, he became known as the best improviser on set while playing a childlike character named Andy Dwyer. For the first time since he landed in L.A., Chris Pratt’s persistence had finally set him on the right path.

Figure out whether or not you believe in yourself, and if you don’t, find a way to.

Landing the role of a lifetime Pratt was now overweight and seen as “too fat” to portray the character he desperately wanted — Scott Hatteberg in Moneyball. Regardless, he had long learned the value of hard work and persistence, so he set his focus on losing weight to get the part. Every week, he worked out and checked whether the studio had cast anyone. When he felt he was ready, he took a photo of himself and sent it to the director. In 2011, Pratt won the role.

His resulting performance allowed him to branch out into other genres. Over time, his roles became more prominent and his reputation as a film actor grew. In 2014, he lent his voice to The LEGO Movie, a blockbuster that brought Pratt’s name in front of the eyes of Hollywood executives.

Later that year, a Marvel casting director thought his light-hearted charm would be a perfect fit for the humorous sci-fi adventure Guardians of the Galaxy. However, director James Gunn didn’t agree. Pratt was much too large and goofy to portray the chiseled and heroic Peter Quill. In fact, Pratt himself thought he was “too fat” to play a superhero, and turned down the invitation to audition.

After much convincing, the actor accepted to visit the studio and meet James Gunn. Twenty seconds into his hilariously improvised audition, the director changed his initial opinion about the role. Even though Pratt was 60 pounds overweight, Gunn refused to give the role to anyone else.

Reaching stardom and beyond

With the worldwide success of Guardians of the Galaxy, Chris Pratt became a top-earning actor and went on to lead another box office hit, Jurassic World. Since then, he has earned numerous awards and, in 2017, his own star on the Hollywood Walk of Fame.

Now an internationally famous actor, his future in acting is one of the brightest in the movie industry. With upcoming blockbusters such as The Avengers: Infinity War, Pratt is finally fulfilling his life-long goal of becoming a celebrity.

However, he always remembers his humble beginnings and regularly donates money to various charities. He also makes time to visit sick children in full Star-Lord gear, using his notorious humor to bring a smile to their faces.

Chris Pratt’s success may not follow a path of trauma and struggle, but his unwavering belief in himself is surely a lesson to follow. Had he not put in the work to audition at every possible opportunity and challenged himself to win every next role, we would be watching a very different Guardians of the Galaxy today.

His life story is yet another reminder to be open to the different currents in life. Whether you already have a goal in mind or feel as if there is something else waiting for you, have the courage to take hold of every opportunity that crosses your path. You never know where it may lead.

If you wait for things to be perfect, you’ll just miss out on life.