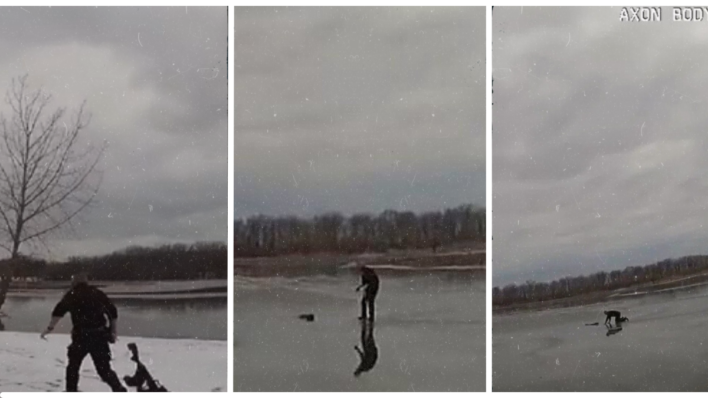 One New York police officer disregarded his own safety in order to save a struggling dog that had fallen into the icy water while out on a walk with her owner.
By Lindsey Staub    February 2, 2022

One New York police officer disregarded his own safety in order to save a struggling dog that had fallen into the icy water while out on a walk with her owner.

After receiving a departmental award for pulling a woman out of a burning house in November, Officer Jon Smith from the Lewiston Police Department deserved a break. Instead, he was on a rescue mission again, this time for a puppy.

From fire to ice

While on a walk with her owner around Bond Lake near Lewiston, New York, a 10-month-old Labrador named Kona chased a flock of geese that had landed on the surface of the partially-frozen lake. It was then that Kona fell into the freezing water at the edge of the lake.

Although she is a strong swimmer, there was zero chance of her getting back out onto the ice and she began to panic and tire quickly.

Help is on its way

Immediately after arriving, Officer Smith ran toward the drowning dog. With no rescue equipment, he quickly and carefully made his way across the ice. He did not stop until he was about fifty yards from shore, where Kona was struggling to keep her head afloat.

In a heroic act, Officer Smith knelt down on the ice and pulled the 75-pound dog from the lake. Once she got her footing, Kona was able to run back to her owner.

“Kona and I and everybody that loves her are extremely grateful for his selflessness and courage,” her owner wrote. “His professionalism and bravery should be applauded.”

Smith to the rescue

The Lewiston Police Department posted on Facebook the body cam footage of Kona’s rescue along with a message from her owner. People raced to the comment section to share their gratitude for Officer Smith’s courage.

“I love seeing that they’re still humanity that cares about animals! You deserve an award!” one person commented.

Officer Smith, who has worked at the Lewiston Police Department since July 2020, has made a name for himself by rescuing both people and animals.

With selflessness and courage, Officer Smith ran across thin ice in early January, and by doing so, saved the life of not just Kona, but of all those who love her. Officer Smith reminds us that all living things deserve a helping hand, or paw.