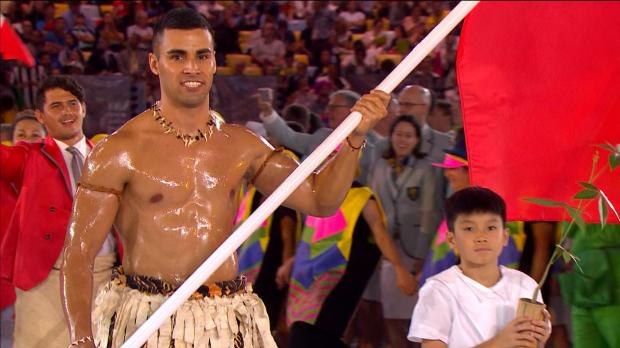 Pita Taufatofua’s name might not ring any bells, but most of us remember the Tongan’s iconic Rio 2016 entrance –
By Eliza Theiss    January 29, 2018

Pita Taufatofua’s name might not ring any bells, but most of us remember the Tongan’s iconic Rio 2016 entrance – as the former taekwondo Olympian set the internet ablaze with his tongue-in-cheek opening ceremony entrance.

Nicknamed “Tonga Flag Bearer”, the 34-year-old made his iconic entrance at the Parade of Nations wearing only a tongan mat – known as ta-ovala – and generous amounts of oil, spurring countless viral memes.

Although Taufatofua achieved his Olympic dream by competing at the 2016 Summer Olympics, the dedicated athlete’s unbreakable drive for achievement has spurred him on in the grueling world of Olympic sports.

Just a year after starting training, the unapologetically optimist athlete has made Olympic history by becoming the first Tongan to qualify for both the Summer and Winter Olympics.

Every single race, at the end of the first lap, I’ve wanted to quit. End of the first lap of every single race, I’ve looked at the finish line, and I’ve just thought “I want to walk off, I’m done with this!”, but I’ve got two mottos in life. One is “Always show up!” and one is “Never give up! Even if you come last.” And I’ve come last many times up to this point, but I kept on pushing. Pita Taufatofua

Having driven 3 days in a blizzard and overcoming avalanche-blocked roads, not to mention Iceland’s “negative a million degrees”, Pita fought until the last second for his double Olympic dream, qualifying on his last race, on the last day of the process.

Describing the epic race as “grave or glory”, Taufatofua only started training in cross-country skiing one year ago, after deciding to find “the hardest possible sport” to compete in at the 2018 Winter Olympics in PyeongChang.

Hailing from the snow-free Polynesian island kingdom of Tonga, Taufatofua learned how to ski on roller skis and trained only 10 weeks on snow before the competition.

His epic last race not only qualified him for PyeongChang 2018 as Tonga’s first summer and winter Olympian, but made him the first Tongan to qualify in skiing, as well as only the second Tongan ever to qualify for the Winter Olympics, after Fuahea Semi’s Sochi2014 run in men’s luge.

There’s nothing special about me. I wasn’t born with any talent. What I do have is that I don’t give up, I don’t quit. Every race I wanted to quit, but I don’t quit. But that’s not special to me, that’s something anyone else out there can do as well. Anyone can be that person. Pita Taufatofua

Following his Hail-Mary run in Iceland this weekend, the humble athlete was quick to spread the glory, repeatedly thanking his supporters, team members, trainers, and – as a perfect example of the Olympic Spirit – his competitors, many of whom he thinks of as friends. “This isn’t about me, this about all the people behind me, pushing me on. I’m just the guy who’s on the track at the time of the race,” he declared on the Olympic Channel.

People don’t see the work that goes on behind. People only see the shiny guy that walks with a flag, but so much work has been put in. Not just me, but the whole team, the whole country, and all the people who support us. Pita Taufatofua

To fulfill his Winter Olympics dream, Taufatofua has sacrificed more than ever over the course of the last year. His grueling training regimen required him to loose 15 kg to increase his speed, complete and utter dedication to the qualification process, and massive financial sacrifices. “Financially I’m in the worst position ever. But I’m the happiest ever,” he declared in a Facebook Live video, repeatedly thanking the global audience that has supported him in spirit and through his GoFundMe campaign.

Only halfway to his funding goal for PyeongChang’s, Taufatofua’s fundraising efforts are infused with his boundless community spirit – to show his gratitude, Taufatofua is writing the name of every supporter on his official jacket to have everyone with him, celebrating the highest level of sports performance. As for the rest of his outfit, that remains a mystery for now. You can follow Taufatofua’s inspirational journey and get a daily dose of optimism on Instagram.

1) Begin with Gratitude- There are soo many things to be grateful for. Your health, your family, your friends, shelter and food. Acknowledge them all. 2)Set a goal that serves humanity- Our big new year mistake is to start with a goal that serves us. This should come second. First we serve others and then we are rewarded. This is why giving feels soo good. 3) Start Slow and build momentum- Starting the year with huge dreams is great but nothing is achieved until we build momentum. How many New Years resolutions have failed before the end of January? Start slow and grow. Español 1. Comenzar con gratitud 2. Establecer una meta que sirva a la humanidad 3. Comenzar despacio y construir el momentum #2018 #newyear #motivate #motivation #goalsanddreams #goalsetting #dreams #inspire #inspired #love #peace #humanity #happyNewYear

For me, this is only special if it inspires someone else to become bigger than themselves and that’s why I want this. This is what this story is for me. It’s to try and encourage more people to reach within themselves to become what it is that they’re meant to be. That’s what’s important to me. Pita Taufatofua