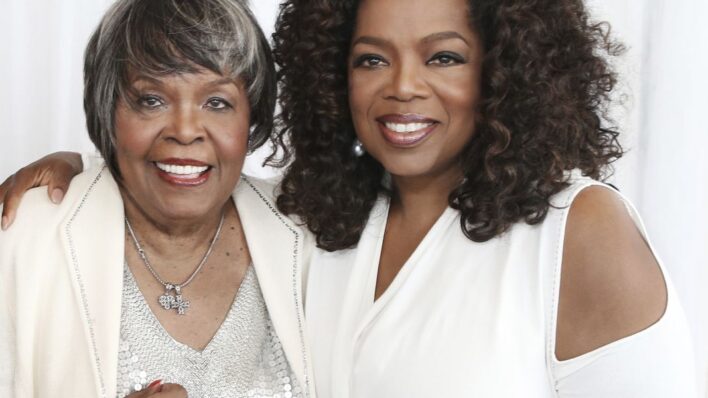 Oprah Shares the Sad, Beautiful Story About Her Mother’s Last Days, Shows How Universal Grief Is

Oprah has long been a guiding force for so many of us. But even our greatest muses can often use
By Aly Walansky    December 12, 2018

Oprah has long been a guiding force for so many of us. But even our greatest muses can often use some guidance.

On Thanksgiving Day, Oprah Winfrey’s mother, Vernita Lee, 83 died at home in Milwaukee, surrounded by family. In the end, Oprah was able to spend some time with her mom, but she struggled with saying goodbye.

“In hospice care they have a little book about the little conversations,” Winfrey told People. “I thought, ‘Isn’t this strange? I am Oprah Winfrey, and I’m reading a hospice care book on what to say at the end.’”

I thought, ‘Isn’t this strange? I am Oprah Winfrey, and I’m reading a hospice care book on what to say at the end.’

“I just thought, ‘What is the truth for me? There isn’t going to be an answer in a book. What is it that I need to say?’ I was praying for a way in.”

In the end, she found what worked for her.

“This is the beauty of my life,” she says. “There’s not a thing that happens to me, that I don’t look at it as a teaching, learning, experience. I knew my mother was dying. I got a call from my sister (Patricia, who Lee gave up for adoption in 1963) that she thought it was the end. I was planning to go to launch Michelle Obama’s book, Becoming, in Chicago. I hopped on a plane and I went early—I surprised my mother.”

Thank you all for your kind words and condolences regarding my mother Vernita Lee’s passing. It gives our family great comfort knowing she lived a good life and is now at Peace.🙏🏾✝

“And that’s what happened. People would come in. She would tear up when she saw them. You could see the appreciation and love she felt for them. Then, I said to her, ‘What a wonderful thing to be able to say goodbye,’ because she’s completely coherent and perfectly understanding everything.”

“I waited for a way to say what I wanted to say,” she says. “I couldn’t find it that day. The next morning I woke up, and I was actually praying for, ‘What is a way I can have this conversation about the end? How do I close it?’ I just thought, ‘What is the truth for me? What is it that I need to say?

Searching for comfort and closure in music

She stayed with the music theme when she saw it bringing comfort to her mom, “I played another one of her favorite artists, Joshua Nelson, singing ‘How I Got Over.’ I could see that it opened her a little bit, because my mother’s been a very closed down person. I could see that the music gave me an opening to say what I needed to say.”

A moment of gratitude

“What I said was, ‘Thank you. Thank you, because I know it’s been hard for you. It was hard for you as a young girl having a baby, in Mississippi. No education. No training. No skills. Seventeen, you get pregnant with this baby. Lots of people would have told you to give that baby away. Lots of people would’ve told you to abort that baby. You didn’t do that. I know that was hard. I want you to know that no matter what, I know that you always did the best you knew how to do. And look how it turned out.'”

RELATED: Parents of Confident Kids Do These 7 Things Daily

Winfrey continues, “Then I told her, ‘You should be able to … you should go in peace.’ I told her because my mother has had diabetes. Three years ago she knew she should’ve had dialysis and she didn’t want to do it. It was her choice not to do it. I said (at the time), ‘You should do whatever your body tells you to do. Nobody’s going to force you to do what you don’t want to do.’ I said, ‘You made the best decision for you, but now your body’s shutting down. This is what’s happening. Your kidneys have shut down. Your organs are going to shut down. What you want it to be, what I want it to be, is as peaceful as possible.’”

“In that moment, my sister was in the room. My mother’s had real problems since my sister came back from the adoption. My sister said, ‘Please forgive yourself, because I’ve forgiven you for giving me away.’ It was just really sacred and beautiful. I would say to anybody—and if you live long enough, everybody goes through it—say the things that you need to say while the people are still alive, so that you are not one of those people living with regret about what you would’ve, should’ve, could’ve said.”

“I feel complete. I feel really, really moved by all the people who’ve reached out to me. I got a really lovely note, just yesterday, from Jimmy Fallon (whose mom Gloria died in 2017) saying, ‘My mom’s up there, too, so if your mom has a party, tell her to call my mom.’ I feel like it was as sacred and as blessed as a passing can be.”

None of us are ever ready for loss, but if it’s going to happen, being true to yourself and give yourself room to feel and grieve and say what you need to say will be the most comforting thing you can do.