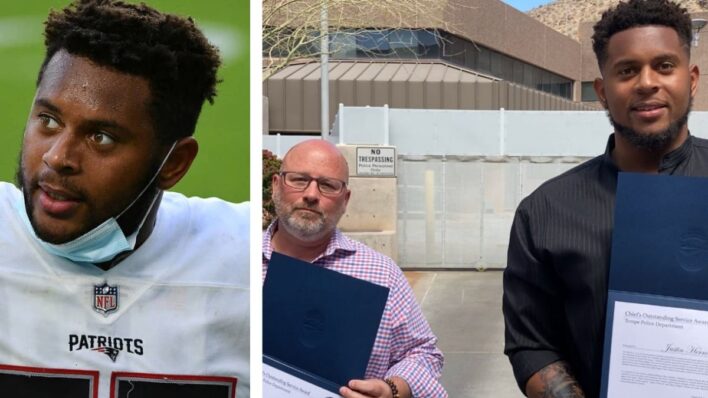 One NFL player’s biggest moment came far away from the field, but counted for much more. Foul play Justin Herron
By Bryan Liquor    April 13, 2021

One NFL player’s biggest moment came far away from the field, but counted for much more. Foul play Justin Herron

One NFL player’s biggest moment came far away from the field, but counted for much more.

Justin Herron is not your average civilian. At a hulking 6’5″ and 305 pounds, he is an offensive lineman recently drafted by the New England Patriots football team.

One morning, he was training for his second season at Kiwanis Park in Tempe Arizona when he heard a woman screaming for help.

As he approached the commotion, he saw a man forcing himself on a woman in broad daylight. He couldn’t believe his eyes.

“You see it in movies and TV all the time but you never think it would happen in real life until it does. In that moment, I was in shock”

Herron’s instincts immediately kicked in, he explained to CBSN Boston.

Despite his adrenaline rushing, Herron was remarkably mindful of not hurting the man.

Meanwhile, Herron helped take the 71-year-old victim away from the scene “to begin the healing process.”

Police quickly arrived on the scene and arrested 30-year-old Kevin Caballero. He was charged with kidnapping and attempt to commit sexual assault.

In honor of his bravery, the Tempe police department awarded Herron the Outstanding Citizen certificate.

However, Herron is quick to downplay any hero talk.

“There are so many heroes that go unnoticed on a daily basis. I was just doing what anyone else would do in that moment”

Herron hopes that his experience sends a clear message to everyone, and that the event reminded him of a valuable lesson he learned long before joining the Patriots.

“My parents always talked to me about it, if there’s someone in need, make sure you can help them and be the best you can be.”

You don’t need Herron’s athletic pedigree to make a difference. Instead, trust your natural instincts when it comes to stepping in and impacting others positively however you can.